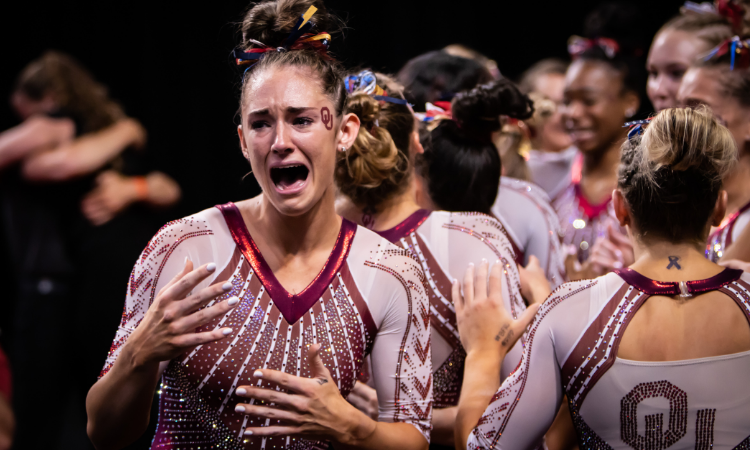 KJ Kindler is renowned for her beam pep talks. On Saturday afternoon, with her Sooners heading to beam for the final rotation of the 2022 national team final two tenths ahead of Florida, Kindler said nothing to her beam team.

“Sometimes you have to know when not to talk,” she said.

Oklahoma was on a roll, coming off of historically strong vault and bars rotations. The meet didn’t start out on a high, though. In the first rotation, Oklahoma had to count an out of bounds on floor and found itself in last place heading to the second rotation.

“I was fired up,” Ragan Smith said.

Fifth-year Carly Woodard was thinking about Secretariat. The Triple Crown-winning Thoroughbred was the Sooners’ legend for the team final. The horse came out of the gates last in every race he ran. That motivated Woodard, who gathered the other seniors to remind them that Secretariat still won.

“See, she was the one talking!” Kindler said.

It’s not the first time this year that Woodards’ leadership stood out. During preseason, she came across a quote on the Balance Beam Situation’s website: “If there is any year when it is actually safe to predict Oklahoma not winning, this is the year.” She, Allie Stern, Emma LaPinta and a few others printed the quote and taped them around their facility.

Kindler brought the piece of paper with the quote to Fort Worth.

“That was kind of like the beginning of us feeling like we had to prove ourselves, which is a great place to be,” Kindler said of the quote.

It’s the attitude the Sooners carried to vault after the tough opening on floor. Katherine LeVasseur, who had a mistake on vault in the semifinal, stuck her Yurchenko one and a half for a 9.975. To Kindler, that was the turning point.

From that vault on, Oklahoma had the momentum and maintained it. Moving to beam in the last rotation, Kindler didn’t want to break the momentum that started in the second rotation and built through bars.

“If I stopped and circled them up, they would make the moment bigger than they needed to,” she said.

Smith was on the beam when Trinity Thomas’ perfect 10 came in on floor for the Gators. The arena erupted right as she set for her series.

“I didn’t even hear it, to be honest with you. I didn’t hear it. I was so locked in and just focused on myself that I didn’t hear a thing,” she said of the moment.

Smith’s routine clinched the win for Oklahoma, and she sprinted to her teammates feeling like she had done all she could do.

Now that the Sooners have won their title, Woodard would love to meet Luke Combes, the artist she chose for her home beam music.