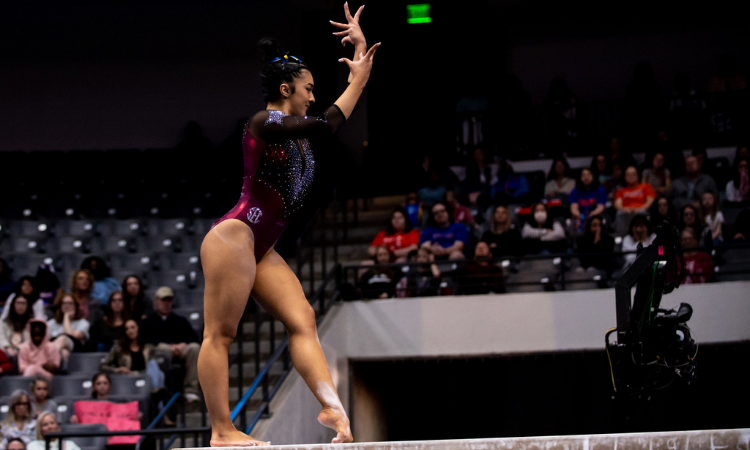 First up is the Seattle regional. Wednesday will feature No. 29 Stanford and No. 34 San Jose State in round one. Thursday we jump into round two action with No. 5 Alabama, No. 12 Michigan State, No. 21 BYU and No. 25 Washington competing in the afternoon session and No. 4 Utah, No. 13 Oregon State, No. 19 Illinois and the winner of round one in the evening session. Two teams from each of these Thursday competitions will advance to round three on Saturday where the top two from that meet make it to nationals.

If everything should go wrong for Stanford, it can still throw a low-195 into the mix. The team has an incredible track record of consistency this season; it went the entire season within a two-point margin between its highs and lows. San Jose State has had an equally consistent year, with the exception of a 192.725 during its second outing. Stanford does have the higher season high on its side, but spring is the season for upsets.

Both San Jose State and Stanford have gone 196-plus in their last four meets out of five. However, if everyone hits this session, Stanford has the advantage and would be the one to advance. Even so, San Jose State is close behind, so even a strong vault rotation from Stanford wouldn’t carry it through with just a few tenths given away on landings.

Both Stanford and San Jose State have four gymnasts a piece qualify as individuals. For Stanford, keep an eye on Kyla Bryant, who will be in the all-around. She notched her newest career high of 39.675 this season and has been knocking on the door of a 10 on floor all year long. Don’t sleep on Brenna Neault’s beam either—she’s had just one low beam score in all of 2022, but she heads into this weekend with a 9.880 NQS and a high of 9.925. San Jose State’s Jada Mazury notched a 39.400 toward the end of the season, and with an NQS of 39.345, she can put some real pressure on Bryant’s 39.395. Mazury also excels on bars and floor, where she has season highs over 9.900. Emma Milne has had a phenomenal year on beam and sits top 25 in the country.

Alabama has had a well-paced season, opening with a high-195 to close the last three weeks with a 197.825 or better, opening 2022 in 11th and climbing steadily each week to enter the postseason in fifth. Michigan State started the year tied with Alabama, dropping to 15th for a few weeks, finding its rhythm around week seven and ultimately landing in 12th at the close. Like Michigan State, it took BYU until the better part of March to find its groove, but it’s worth noting that, like Michigan State, BYU brings a stellar beam lineup that hasn’t gone lower than a 48.600 all season. Host Washington had a slow burn 2022, slowly climbing the rankings. It may not bring the explosive power of the other teams, but it follows the trend of being a beam team in this session.

Alabama comes into this session as the third best bars team in the country, and Michigan State is the next closest at 15th. Even if things go pretty sideways for Alabama, as long as the Crimson Tide can keep it together on bars, it will easily move on. Michigan State has a powerhouse floor lineup, sitting just two spots behind Alabama, as well as one of the top 10 beam lineups in the country, an event that could be crucial with the pressure of the postseason and a way for Michigan State to prove itself worthy of moving on. BYU may not be close enough to surpass Alabama, but it can overtake Michigan State if the Spartans don’t bring it home on beam. Washington is no slouch, though. In fact, it’s recorded a better season-high than BYU and comes within three tenths of Michigan State’s best. If Washington hits and Michigan State drops a few tenths, the host team could add a little chaos to this mix.

Assuming a healthy Luisa Blanco, don’t take your eyes off of her. But Alabama is stacked, and Lexi Graber,  Makari Doggette and Shallon Olsen pack powerful punches in the Alabama lineups. Blanco and Doggette are center stage in Alabama’s bars top six. Don’t forget Graber is the reigning national floor champion. Michigan State’s Skyla Schulte, Big Ten Freshman of the Year, can be relied upon to hit in any situation, as she has just two scores below a 9.700 out of 46 routines this season. Look to Delanie Harkness to lead the Spartans on bars, she has a 9.900 NQS, and expect big floor scores from leadoff to anchor, as the Spartans’ top six hasn’t dropped below 49 since the opening meet of 2022. BYU’s Sadie Miner-Van Tassell is the MRGC Gymnast of the Year and vault specialist of the year, both with good reason. Likewise, Elease Rollins was named beam Specialist of the Year with stunning extension and a triple series. Look to Skylar Killough-Wilhelm, especially on beam, and Lana Navarro to put up big scores for Washington.

Kinsey Davis is in a good position on vault and bars to make a statement, but with this session being filled with beam teams, she would need her high of 9.925 or better to stand a chance. With only Alabama bringing consistently strong bars scores this session, Davis could find herself throwing her hat in the ring there. SEMO’s Anna Kaziska bring a wealth of experience, but floor proves to be her best bet with a 9.900 NQS and 9.950 high.

There is a lot of sneaky talent in this session. Utah has been sailing through the season comfortably at No. 4, just a pace behind the Florida/Michigan/Oklahoma group at the top, and should easily walk through to the final out of this session. Oregon State has also had a comfortable and successful year, thanks in large part to Jade Carey, but also on the heels of an improved bar lineup. Illinois had a slow start but three back-to-back 197s landed it in the top 20 to close out the regular season, though it comes into Seattle after an off performance at Big Tens. Whichever of Stanford or San Jose State lands in this group will be thrilled to be here yet will still be competitive. The Spartans have had an explosive, stellar season, and Stanford has come back in a huge way from a chaotic and frustrating 2021 due to COVID restrictions in Santa Clara County.

Utah, assuming a normal meet, will easily win this session. The big fight will be between Oregon State and Illinois. The Beavers have the edge after more consistent highs, but Illinois has been surging, especially after Mia Townes’ return to the lineups late in the year. The increasingly healthy Illini are a threat, and if Oregon State is even a little off its game, a big hit from Illinois could see it advance. If both happen to have an off day—not even a disaster, just a bit shaky—Stanford, which has a high of 196.975, could shock the field and advance to the final. San Jose State’s 196.625 high is also strong enough to make a case for the Spartans to hang with the group if it advances out of session one.

The must-watch names in this session are obvious: Olympic teammates Grace McCallum (Utah) and Jade Carey (Oregon State). Utah’s Maile O’Keefe is also a spectacular all-arounder, and Sydney Soloski remains on 10-watch on floor. The Beavers’ Madi Dagen is another standout on all four but especially vault and beam. Illinois is headlined by Mia Takekawa, who has a chance to advance to nationals on beam if the Illini miss the big dance, as well as in the all-around on her best day, and Arayah Simons is a vault star. Both have perfect scores on their pet events, with Simons’ being a 9.950 for her Yurchenko full. Each of Stanford and San Jose State have all-arounders to watch, Kyla Bryant and Jada Mazury, respectively. The Cardinal’s freshman Brenna Neault is a stellar beamer, as is the Spartans’ Emma Milne.

Kyla Bryant is a nationals threat in the all-around with a 39.675 to her name this year. Her biggest obstacle is Jade Carey, should Oregon State not advance. Carey likely would need to have a mistake for any other all-arounder to make it to nationals in her place. Tara Kofmehl is also a sneaky pick to advance on floor. She’ll have a lot of stiff competition, but she put up a 9.950 at MACs and on her best day could stun the field. Every gymnast in this group can comfortably hit 9.900 or 9.925 on their event—no one can be ruled out—but with such a stacked group, it’ll be a tall order to advance.

The most likely scenario is that we see Alabama, Michigan State, Utah and Oregon State in this final, and Alabama and Utah will advance to nationals. That would spell the end of both Michigan State and Oregon State’s Cinderella seasons and will make the individual fields incredibly brutal, since both teams are so stacked with talented gymnasts likely to advance. BYU and Illinois also each have upset potential in their round two sessions but are very unlikely to topple either of Alabama or Utah and make a surprise nationals run. Utah is the only team never to have missed qualifying to NCAA nationals, and the Utes look poised to keep the streak alive. That said, if they’re having an off day and the Spartans or Beavers are firing on all cylinders, it’s something to keep in mind.