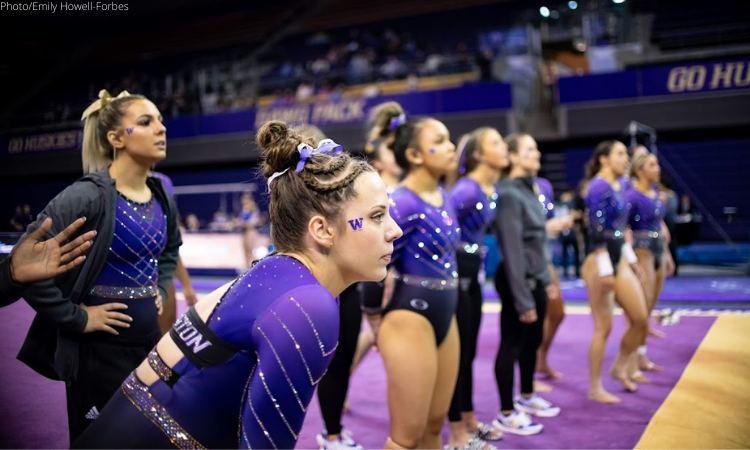 Conference championships are here! For NQS, this means that every DI/DII team has one more opportunity to improve their ranking going into regionals. Most will have a road meet this weekend while hosts will typically count this score as a home meet. Let’s get right into it with a regionals projection!

We do have one tie to break, with Auburn and Alabama both sitting at No. 6. Auburn wins the tiebreaker by virtue of having the highest score remaining after removing all NQS-counting scores. This tiebreaker aligns Michigan with the Auburn regional, leaving Florida to make the geographic choice of Raleigh and sending Utah to Seattle. Of course, there is very little chance that this will be the exact regionals lineup, as there’s still a lot that can happen this week!

Locked In: The Seeds

Even though this is the Bubble Watch, we’ll break down some scenarios for teams who are locked into regionals as well. As always, scores in bold indicate performances that can no longer be dropped from the NQS calculation, crossed out scores are the current season high and we’ll calculate the team’s projected ranking (against the current standings) if it matches or exceeds its season high this weekend. In some cases we’ll also provide the score a team needs to reach a certain goal, which can be anything from locking in the No. 1 overall seed to securing a place in the regionals field. We’ll start with the current top 20, which has either locked in a seed or will be fighting for a seed this weekend.

Oklahoma is currently ahead of Florida by virtue of having one more 198-plus score on its resume, but it’s Florida that controls its own destiny this weekend. The Gators can guarantee the No. 1 ranking with at least a 198.525, which will be tough but not impossible to achieve. The other scenario for a top-ranked UF is to score at least a 197.950 and outscore the Sooners by .050. If both teams increase their NQS and end up tied, it’s likely the Sooners will win the tiebreaker.

Finally, let’s discuss what each team needs to do to hold off Michigan: Oklahoma needs to only incrementally increase its NQS, as a 197.925 will ensure the Sooners stay ahead of Michigan while Florida needs a 197.950 to avoid a potential No. 3 ranking.

Michigan has an outside shot at a share of the No. 1 ranking, but only with at least a 198.525 at Big Tens while also requiring Oklahoma not to increase its NQS (and also requiring Florida not to surpass OU). A score of that magnitude feels unlikely at a conference championship, especially for a team that hasn’t scored a 198 since early February, but Michigan is guaranteed a top seed at its regional no matter what happens this weekend.

Utah, LSU and Auburn are all fighting for the No. 4 ranking, which will be the last team to receive a top seed at its regional. Utah is the only one that controls its own destiny and can secure at least that seed with a 198.000. If the Utes don’t reach that peak, however, LSU and Auburn both still have low-197 scores to drop from their NQS and are in prime position to move up.

Alabama is locked in as a second seed in whatever regional it ends up in, so there’s very little to watch from an NQS perspective this weekend.

Minnesota, Kentucky and Cal are all in contention for the No. 8 overall ranking and the No. 2-seed that comes with it, but Minnesota is the heavy favorite to remain in that spot, needing only a 196.725 to secure it. If either Kentucky or Cal fail to increase their NQS, however, they’ll be hoping to hold off several lower-ranked teams who could theoretically push them down to a 4-seed.

Michigan State and Oregon State are both locked into a seeded spot at regionals, though they could end up as either three-seeds or four-seeds. Neither one controls its own destiny with regard to earning a three-seed, so they’ll each have to put up the best score possible and hope other teams in contention stumble.

The bubble for regional seeding will be an interesting race to watch this weekend, with Arkansas, UCLA, Illinois and Maryland all capable of surpassing Arizona State, Denver and Ohio State for top-16 rankings. Arizona State and UCLA are the only teams capable of securing their seeds with scores, and UCLA even has a decent shot at rising all the way to a three-seed.

Locked In: Avoiding the Play-in Round

This middle group of teams are locked into a regionals position but cannot break into the top 16. The main goal should be to earn a top 28 ranking to avoid a play-in dual on day one of regionals. Teams ranked No. 17 to No. 28 are sorted into regionals based on non-gymnastics criteria, so the exact ranking within this range doesn’t really matter.

BYU and Georgia are in the weird position of being locked out of regionals seeding and also guaranteed to finish in the top 28, so there’s not much to watch from an NQS standpoint this weekend.

All of the teams currently ranked 23rd through 28th are guaranteed to make regionals, so their main NQS-related goal this weekend will be to avoid the play-in round. All but Utah State and N.C. State can assure themselves of that position by achieving at least a 196.555 NQS.

Now we get to the fun part! These 11 teams will be fighting for the final eight regionals berths.

Of these 11 teams, eight of them have achievable scores that would guarantee a regionals berth, with Washington and Southern Utah even capable of guaranteeing a first round bye. San Jose State, Penn State and Central Michigan will have to wait to see how the standings play out.

All teams ranked lower than CMU, plus No. 39 George Washington, are mathematically eliminated from regionals contention.

From here on out we’ll assume that the top 28 teams will get a bye through the play-in round, meaning that teams ranked No. 29 and lower are eligible to qualify individuals to regionals. While that ended up not being true last year, we are hopeful to see common sense prevail this year!

If regionals were to start tomorrow, the following individuals would qualify as all-arounders:

On the outside looking in: Jaudai Lopes (San Jose State; 39.200), Malia Hargrove (Arizona; 39.180), Sarah Moravansky (Western Michigan; 39.165). Hargrove and Moravansky are more likely to qualify than Lopes since both have sub-39 scores to replace this weekend.

On the outside looking in: There’s a seven-way tie at 9.845 among SJSU’s Jaudai Lopes, Rutgers’ Belle Huang, Temple’s Ariana Castrence and Julianna Roland, Washington’s Lana Navarro, UC Davis’ Emily Pires and WMU’s Sarah Moravansky. Moravansky has the lowest score to replace this weekend with a 9.775, so she could easily move into qualifying position. Dekanoidze is injured and out for the season; the selection committee does not name alternates for individual spots, but we hope they would skip over her and award the spot to someone else anyway.

On the outside looking in: Mccaleigh Marr (Penn; 9.855) lost out on a tiebreaker with Klein and Hurst in this projection, but she still has a 9.800 to drop. There is a six-way tie at 9.845 among Lauren Volpe (Ball State), Hadley Roberts (Lindenwood), Clara Hong (Towson), Kathryn Thaler (Nebraska), Abbie Pierson (West Virginia) and Amanda Gruber (Western Michigan); Thaler and Pierson are the most likely of this group to improve their NQS since they both have 9.775s to replace.

While Iowa, Boise State, Utah State, Iowa State, Stanford and N.C. State are currently ranked in the top 28, all are in danger of slipping below that threshold this weekend if teams ranked below them excel. Let’s take a look at the individuals from those teams who could qualify if that happens.