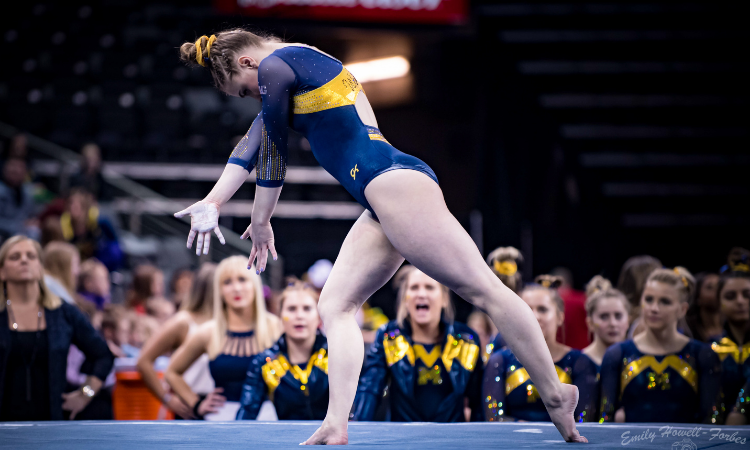 Bringing in Bev Plocki’s alma mater and the reigning Olympic champion into Crisler for senior night is pretty genius. We’re saying farewell to Natalie Wojcik, Abby Heiskell and Abby Brenner tonight, so get your tissues out.

Michigan can’t catch Oklahoma and regain the No. 1 spot after this meet no matter what happens, but it has a shot at taking No. 2 away from Florida. A 198.225 ensures it stays ahead of No. 4 Utah. For Auburn, the path is easier. Its ranking buddy Alabama is idle, so dropping the low 197.250 means taking sole possession of that ranking spot. Of course, moving up on Utah and sneaking into the one-seed spots for regionals is the goal, and not out of the question.

West Virginia is holding onto its regional berth for now, but still not fully safe. A 196.300 here ensures the Mountaineers stay in the top 36 heading into championships next weekend.

Welcome to Big Ten gymnastics, Auburn and West Virginia fans. Streams on BTN+ tend to…not really start on time. This one is rolling on schedule, but the four minute touch just started, so first vault will still be a few minutes. Also, the live scores are still from the PSU meet, but if you refresh a few times once we see a vault, they should update to today’s meet.

It is LOUD in Crisler, sounds like a huge turnout. An attendance record, per the Triple Twist Gym gals commenting.

Sabados (Aub): Bail hand was a little loose in the core. DLO, hop back.

Handono (WVU): Cat to switch to split, little short of 180s there.

Combs (WVU): Beam scores are slow pokey today. Long wait here. Front aerial back tuck, little off line on the former and had to make a tiny adjustment on the tuck landing. Great through her leaps. Front toss to beat, clean. Front full, soft knees and a hop.

Holmes-Hackerd (WVU): Yet another longer wait. She has a really pretty presence up there. Cat to front aerial back tuck, micro adjustment in there, bit of a slow connection and a low shoulder on the tuck landing. Cat to switch to back tuck, little flutter hop to stay on and she saves the landing, maybe 2-3 tenths of deduction there. Gainer full off the side, hop.

Asper (WVU): Waiting, waiting. The other two events flew so quickly, so let’s go beam judges. Bhs bhs loso, little off but saves it. Switch to split half, little short of 180 on the half. RO 3/2 hop.

Messy landings for Michigan gave away a lot of tenths in that rotation, and really quite clean work for the Tigers let them steal the lead after one. We’ll see if Auburn rolls with a six 10.0 vaults lineup here to minimize the built-in score disadvantage there. West Virginia recovered from the midlineup fall well, really keeping errors to a minimum and saving other major mistakes.

Hollingsworth (Aub): Chest down on her series. Switch o switch half nice. Side aerial hop.

Hornung (WVU): Music issues got sorted out after a bit of a wait. Double pike, little scootch step with her back foot. Low on the combo pass, stepped back. Nice leaps. Good landing on her last pass.

Wojcik (UM): Toe hand to giant Detlchev immediate bail. Clean handstand. DLO stuck. One of her best, which is saying something.

Holmes-Hackerd (WVU): Little off online on her opening pass, a rudi to punch two foot layout to stag. Tour jete half to popa really pretty! Couldn’t see her feet on the last pass landing again.

Pierson (WVU): DLO, hopped to the side a bit and lunged forward, low chest. Clean on her combo pass. Nice double tuck, slid the front foot a bit in the lunge.

Combs (WVU): Front trough double pike, stuck almost, little adjustment, wow! Fun pass. Clean through her leaps. In all honesty, missed the rest of this trying to sort out what Lee would do about that series.

Ki. Yancey (WVU): Double pike, pops right into the lunge. Switch ring to split full was mostly behind her teammates, looked clean in the air. RO 3/2 barani double stag, nice there, seemed pretty controlled in the jump. Double tuck, again, couldn’t see her feet, but her upper body was controlled.

Pi. Smith (Aub, exh.): Really pretty front walkover mount! Switch to switch half, nice. Bhs loso, little off to one side but she pulled it back in and really minimized the deduction. Bhs 3/2 stuck, wow! Excellent routine.

Auburn was able to drop the fall, but still had to count Lee’s error, letting Michigan run away with it at the halfway point on the heels of a great bar rotation. West Virginia put up a very solid 49.300 on floor. The Mountaineers were excellent there, with particularly clean leaps. Auburn can be excellent on floor, and beam has been Michigan’s toughest event this year, so this rotation will be crucial for both squads.

Hubbard (Aub): Good FTDB to open. Little wonky on her combo pass, did a punch front out where I assume she intended a front lay.

Lewis (WVU): FTY, twisted a bit right on the table, and slung it off to the side. Deep knees but didn’t move her feet.

Wilson (UM): Huge swimming arms to stay on on her bhs loso, manages to save it. Switch jump switch jump was huge and clean. Deep and a hop on the double tuck.

Stevens (Aub): Front lay rudi, some knees and a little forward on the landing, but stuck. Double tuck, low chest and had to lunge forward on it.

Vore (UM): Bit of pressure on the freshman who isn’t often in this lineup after two nervy sets to start. Bhs loso, small check. Good front toss. Straddle to split half beat, just a bit of a low back leg on the half. Stuck RO 3/2, just a bit off balance.

Heiskell (UM): Cat to side aerial, big check, turned to the side and dropped her chest. Clean switch switch. Bhs loso, no issues there. RO 3/2 hop.

Wojcik (UM): Front aerial to beat, no deductions there. Clean switch to split. Her usual effortless work. Bhs bhs loso, solid as a rock. RO 3/2, and a hop. Stunning, hop was the only deduction I saw.

Koulos (UM, exh.): BHs, clean. Front aerial one arm front handspring. Steady on her leaps. Does her full turn in arabesque, so lovely. RO 3/2 and a hop.

The Mountaineers are in a decent position to get close to the score they’re looking for here, a low 196 is the ticket. Michigan had some nervous mistakes on beam but held the deductions to a minimum for the most part. Jacey Vore will be feeling very confident after her set got the Wolverines back on track. Auburn just looked a little gassed on floor. Passes were just not quite rotated enough. Could just be some fatigue after a double meet weekend last week.

Ooop the first-ever sellout at Crisler! What a great treat for this senior class for their senior night.

I’m sorry I missed who the Auburn exhibition was, but she sat her Y1.5.

Morrison (UM): Good FTDB to open. Clean on her combo. Switch side to wolf full was clean. Double tuck, slid her front foot a bit in the lunge.

Brooks (UM): FTDB, just so effortless. Front through double tuck, bounds back out of it but brings it under control quickly, maybe .1-.15 off. Clean leaps. Double pike, maybe slid her front foot a bit, it was a big lunge.

The Mountaineers officially remain in regionals position heading into conference champs with that number, good for them. This was a solid meet for that squad. Michigan battled through some steppy landings early and a nervy beam rotation to put an exclamation point on the day with a great floor rotation. Auburn also had some beam woes, and an all-over off day for Lee which kept the Tigers to “just” a low 197. Auburn needs to shake this one off, get some rest after a grueling stretch, and reset for SECs.

EVENT WINNERS: WELL the score sheet is broken so until we get official RTN scores I only know floor for sure.
AA:
VT:
UB:
BB:
FX: Wilson, 10.0