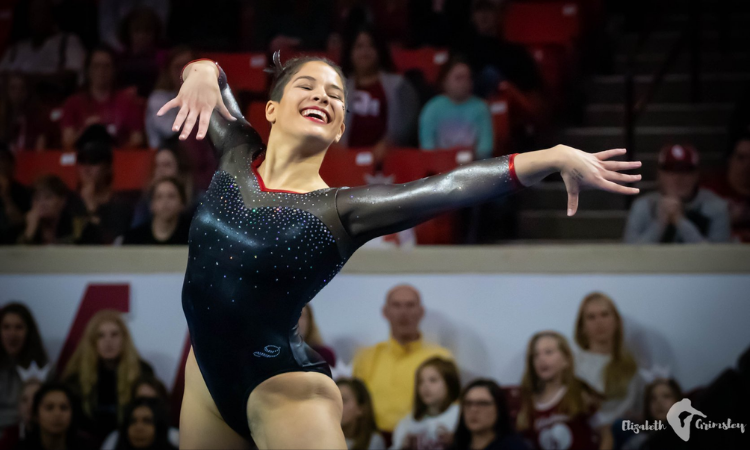 Hello from Stegeman Coliseum! This may be the meet I’ve been most looking forward to all year, and not just because my parents went to UGA and UNC.

Georgia head coach Courtney Kupets-Carter has been at the program’s helm since early May 2017. Who was the previous head coach? None other than Carolina’s new head coach Danna Durante. A solid performance in Athens would be a fantastic way to cap off what’s already been an impressive debut season (and an upset victory would be epic).

The stakes of this meet are higher than just bragging rights, however. The Tar Heels are right smack dab in the middle of that precarious No. 29 through No. 43 zone, and they’ll need at least one more 196-plus score to secure a regionals berth. Even with freshman standout Lali Dekanoidze sidelined with a knee injury, that number is attainable (especially if the same judges from last week’s meet against Mizzou are on deck).

Take note that it’s Senior Night, so scoring will almost certainly be *ahem* celebratory. And what a senior class Georgia will be celebrating: Rachel Baumann, Rachael Lukacs, Mikayla Magee, Alyssa Perez-Lugones, Megan Roberts, Emily Schild and Abbey Ward. During what has arguably been the most tumultuous period in the Gymdogs’ storied legacy, they’ve somehow managed to write a memorable chapter of their own.

Looks like Georgia gave all of the Tar Heels’ seniors a bouquet of flowers, too.

Cashman (UGA): Y full, very clean in the air with a slight pike down. A bit underrotated and steps forward. 9.750

Ward (UGA): Solid Tsuk full, nearly stuck. Good form, but went up instead of out, very close to the table. 9.875

Schaefer (UNC): Great first handstand. Fantastic blind change to straddled Jaeger. A little crooked on her clear hip and bail from my view, but good body tension and control on both so judges might not notice. Another pretty much perfect stuck FTDT. 9.850

Culton (UNC): Pretty Tkatchev, a little low. Almost overarched the handstand on her bail, but pulled it back. Lovely stalder to high double tuck, stuck.

Solid, if not top-notch rotation for either team. This was one of the more dynamic and cleaner vault rotations I’ve seen from Georgia this season, though they gave up several tenths from the landings. Roberts’ vault was the best of the bunch (with Hawthorne’s not far behind), and a great way for her to close out her career at Stegeman.

The Tar Heels series of stuck landings was exactly what they needed to hang with the Gym Dogs heading into vault, one of their weaker events, vault.

Ward (UGA): Good first handstand. Big form break on her Maloney and bail. Very nice final handstand. Lovely DLO in the air with a well-finessed college stick. 9.850 is a touch high, but it’s Senior Night so whatever. Great routine .

Schaefer (UNC): Great Y tucked full with a small hop to the side. Really high amplitude and good distance. 9.775

De Jong (UGA): Great height on her Tkatchev, a little close on the regrasp. Short on the next handstand. Bail looked good. Another very pretty-in-the-air DLO, basically stuck. 9.850

Finnegan (UGA): Lovely handstand to Ray. Gets hung up on her next handstand. Significant break on the Pak, catches very close but powers through. FTDT with chest down and a hop forward. 9.750

Shinohara (UNC): Another powerful Y full. Some pike down and a slide back on the landing. 9.750

Schild (UGA): Beautiful toe-on to a big Ray. Lost a bit of form and tension in her bail. Low DLO with a large lunge forward. Not sure if she put her hands down. 9.125

Roberts (UGA): Great kch. Very minor leg sep on her Maloney. A little overarched on her bail to handstand, but brought it back easily. Perfect DLO with her arms flared out, stuck. 9.850

Nguyen (UGA): Blind change to piked Jaeger, great. A little close on her Pak, straight to the switch kip. High DLO with a small hop forward. APL almost knocked her down with a hug tackle. 9.900

Hattaway (UGA): Exh. Half pirouette to Gienger with leg sep. Bail a little loose. Nice DLO with some leg sep and a hop forward.

Not a bad bars rotation for the Gym Dogs. I wish there were a little more separation in the scores, but nothing egregious. Too bad about Schild’s fall, because there were some really gorgeous moments up to that point.

The Tar Heels made it through with a respectable vault score, though the bouncy landings ate up several tenths that may come into play later on. Knower’s was the highlight for me, even with the large hop.

Nam (UNC): Nice, high double pike to open, slight knee bend and small front foot slide. Fhs to Rudi, well done. Switch half to wolf half, good height on both. Back 1.5 to front full, riiiight on the line. I have no clue whether or not she stayed in. 9.800

St. Brice (UNC): Back 1.5 to front lay, good punch. Wolf 1.5, just shy of horizontal but got it around. Switch full series, front leg a touch low on both. Big double pike, chest down and a front foot slide. 9.850

Greenlow (UNC): Fantastic opening double pike. Switch half to wolf half, a little overrotated. Front through to back 2.5, great form in the air. Back 1.5 to front lay, excellent. 9.875 is fine as long as this scoring energy is the same for Georgia.

Nguyen (UGA): Onodi to bhs, very deliberate and clean. Y turn to full turn, maybe a clever improvisation? The Y looked a little out of control to me. Side aerial to back full, great.

Culton (UNC): Gorgeous double tuck to open. Switch ring to switch side, very crisp and precise. Front lay to Rudi, stuck with a lunge out to show off. Love it. Switch side to straddle half, perfectly horizontal. That’s got to go 9.9-plus. 9.900 on the nose.

Baumann (UGA): Pretty straddle mount. Side aerial to loso, gorgeous. Full turn initiated from the knee, my favorite. Beat jump to switch side, slightly crooked? Could be my angle. Back 1.5 landed on her toes, almost hung on for the stick but took a step. She’s laughing about it, it’s fine. 9.850

Weil (UNC): Powerful open double tuck with a large slide back. punch full to front lay, excellent.  Popa series, good position. Nailed her double pike. She is such an aggressive gymnast, just goes hard on everything (including the dance) and I LOVE it. 9.825

OK, it’s unlikely that UNC is going to close a half point gap with Georgia heading to floor (but not impossible). However, after a season high floor rotation they’re poised for a very nice away score even with a middling beam score, which will only help the Tar Heels’ postseason prospects.

Georgia looked pretty darn good on beam! They’ve officially left the early season unpleasantness in the rearview mirror, bless, and are in good shape to break 197 for the first time this season. Not a bad way to close out the regular season and send off their seniors.

Perez-Lugones (UGA): HIGH double pike, small foot slide. Whip half to front lay, very nice. Switch side to Popa, good position on both. A huge double tuck to close, opened a tad early and had to take a step forward. She truly is one of the most joyful floor workers out there. 9.925… OK

Shearer (UNC): Really pretty full turn. Bhs loso with slight softness on the latter and a tiny waver. Front toss with a large break as the crowd went nuts for APL’s score. Switch leap to switch side, good. One-armed front walkover to gainer full; slow connection, but I think will be credited. 9.675

Magee (UGA): Good FTDP, cest down. Switch half to Popa, nicely done. Back 1.5 to front lay, just a touch underrotated and steps back. Fantastic double pike to finish. 9.850

Greenlow (UNC): Love her should stand to straddle mount. Good full turn. Bhs loso with a small hip check. Cat leap to side aerial and she comes off. Too bad. Switch leap series to beat jump, good position. RO back 1.5 a little wonky on the take-off, but held on for the stick. 9.175

De Jong (UGA): Back triple twist with leg crossing, but got it all the way around. Switch side to wolf full, nice height on both. High and tidy double tuck, very secure landing. Back 1.5 to front lay, a little flat. Overall, very good routine. 9.850

Nam (UNC): Bhs loso, flawless (and I don’t use that word often). Switch leap to switch side, great. Side aerial, solid. Kicked out full turn. Drilled her RO back 1.5. Maybe the strongest beam routine of the night. 9.875 is too low.

Roberts (UGA): Front through to double pike, good control. Switch half to Popa to wolf full, big air on all three. A bit wild on her double pike, kicked her back leg up out of the landing. 9.850

Baumann (UGA): Kicks open the door, now the drum solo. Back 1.5 to front full, perfect. Switch half to straddle that practically touched her ears. Opened up early on the double pike, chest way down and took a big step forward. 9.825

Knower (UNC): Bhs loso, fantastic. Her usual great front toss. Beat to switch half, beautiful. Back 1.5, DRILLED the landing and is immediately consumed by the team. 9.900

Hawthorne (UGA): Getting to watch Hawthorne do the Rerun dance alone is worth the price of admission. Giant double pike, landing isn’t an issue today. Switch full series, nice amplitude and position. Front lay to Rudi to split jump, a bit low from the get-go. 9.900

OK, so Georgia got their 197 and the Tar Heels get a strong away score that will go a long way towards getting them over the Regionals bubble. My biggest takeaway from today is that this UNC team can consistently break 196 even without Dekanoidze.