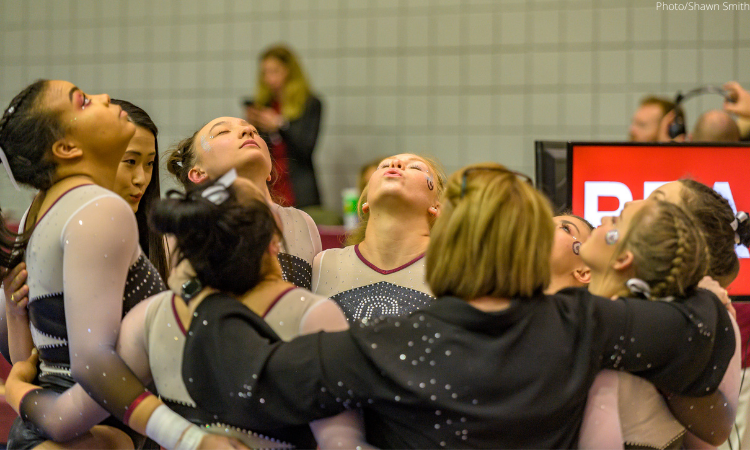 Hello everyone! I’m coming to you live from the alumni section with another MIC conference matchup. This competition is a double dose of special. Centenary will be celebrating head coach Jackie Fain’s retirement as well as dedicating the competition to alumna Sylvia Keiter. Sylvia was a member of the Ladies gymnastics team from 2012-2015 and worked as a graduate assistant coach during the 2016 season. Keiter lost her life in a tragic drunk driving accident in 2018 while assisting another motorist on the side of the road. Ever season since, Centenary has dedicated a competition in her memory to bring awareness to the dangers of drunk driving as well as to honor the strong, dedicated leader Sylvia was.

The Ladies’ 2022 season has been one riddled with injuries and inconsistency. Perhaps Centenary will be able to rise to the occasion tonight. There’s nothing that a new leotard can’t fix. Kendall Sanders had a hiccup on bars last weekend, but expect her to be back on her A game. Be on the lookout for Emma Lavelle as well. Carissa Martinez had herself a day at the TWU quad meet last weekend complete with a unique front toss to back tuck beam series. Did I mention that Leilani Johnson is on a three meet vault stick streak? Let’s see if that continues tonight. Overall, the goal of the day will be to stay on the equipment and have a good time.

SEMO is coming off a season high score at its senior night last weekend. Both Anna Kaziska and Jolie Miller posted 9.95s in their signature events. Miller even became a partial owner of the program record on bars, garnering herself an MIC Performance of the Week honor in the process. If we’ve learned anything from SEMO this season, it’s to never count the Redhawks out. This team has battled back from setback after setback to claw its way up the USAG and conference rankings. Keep your eye on Lydia Webb and Madison Greene. They are doing some seriously big gymnastics this season!

The new leotard in question:

Here’s the tentative lineups for SEMO this evening:

We’ll get started shortly. The introductions are underway.

Lavelle (CC): Yurchenko layout, very floaty with a perfect shape in the air. Just a hop back. 9.425

Maxwell (SEMO): Clear hip, Tkatchev. Some knees. Some form on the overshoot. Blind full double tuck. Several steps back before falling. Valiant effort on that save. 8.800

Johnson (CC): Yurchenko layout, good height with a medium hop back this week. 9.575

Sanders (CC): Yurchenko half, a little low but better landing this week with a small hop forward. 9.725

Miller (SEMO): Piked Tkatchev to Ezhova. Nice. A little past on the pirouette. Double layout, a small hop forward. 9.675. That was some stiff judging. OK.

SEMO was having some handstand issues in that rotation and was very low on some landings. Putting up five athletes on that event definitely hurt the Redhawks. Lydia Webb’s bars was just stunning. She really has stepped up in a major way this year. On the bright side, bars has consistently been SEMO’s lowest scoring event this year, and now the team can move on to the other events. I have noticed that Lindsay Ockler is not in a leotard today. That is slightly problematic. Meanwhile, Centenary posted its season high on vault in that first rotation. The duo of Kendall’s led the way with some lovely twisting vaults. Hopefully the Ladies can carry the momentum to bars.

Reader (SEMO): Yurchenko full, some leg separation on the table and pretty crunchy too. She pulled the rotation around just fine though. A hop back. 9.650

Maxwell (SEMO): Another stuck vault for SEMO. This time a tucked Yurchenko full. Nice one! 9.775

Lavelle (CC): Blind change…. changed her hands, swing half, tries again. Blind change, Jaeger. OK. Overshoot, drags her feet. Double layout. She let go early, may or may not have dragged her knees. 8.350

Lopez (SEMO): Yurchenko full, some leg separation but good height and distance. Just a step back. 9.650

Kaziska (SEMO): Yurchenko full, pretty piked in the air with a step back. 9.600

Greene (SEMO ex): Yurchenko layout, pretty high on the table but solid rotation and height with a step back.

Sanders (CC): Clear hip handstand, fell over, tried to cover with a swing half, but dropped down. Well that was out of character. Casted over again. Regrouping. Clear hip, Geinger, overshoot. Didn’t quite get far enough over the bar and had to tap her feet. Double layout, let go early and had to put her hands down. 7.600. Considering the circumstances… Not bad.

Wilson (CC): Toe hand, Maloney, pak. Pretty connection. Good last handstand. Stuck FTDT that she dropped down out of the rafters. So that was basically her national winning bar performance… so we’ll see what the judges say. 9.800. Appropriate.

Well that happened…I think someone jinxed the bars before everyone got here. SEMO went CRAZY on vault. So many good vaults! Considering what the four minute touch looked like, the Redhawks have nerves of steel. Taylor Ann Wilson bars was also insane. So pretty. So smooth.

Reader (SEMO): Double pike. Solid, some chest down. Get yo freak on? OK. front full, front layout. Some form on the full. Switch side, popa. Slow legs. She looks tired. Double tuck. Pretty short but pulled it around. 9.625

Maxwell (SEMO): Front double full. so pretty, solid landing. Double tuck. A little back on her heels. Back 1.5, front layout. Could’ve had more amplitude but fine. 9.650

Martinez (CC): Switch side connection. Solid. Front toss, back tuck. A leg up check then fall. Another leg up on the turn. More solid on the jump series. Piked gainer dismount with a hop forward. 8.925

Deshler (CC): Front Aerial, BHS. Connected this week, with a check. Split jump, double stag. A wobble on the tuck 3/4. Cartwheel, gainer full dismount with a small step back. 9.425

Greene (SEMO): This music choice is it! Front lay, Rudi. Nice and high on the Rudi. Nice height on the leaps. Double tuck, rolled out of it. Sad.

Lavelle (CC): BHS LOSO. Nice. Cat leap, switch side. Full turn with a chest lean. Side Aerial from a cat leap. RO back 1.5 dismount with a lunging step forward. 9.275

Kaziska (SEMO): Front double full, a little back on her heels. Back 1.5 front layout. Her normal. Rudi, chest nice and high. 9.800

Sanders (CC): BHS layout toe-feet. So solid. So confident. Cat leap, switch side. A little slow getting her legs back together on the leap. Switch leap, tuck full, beat jump. Punch front full dismount. Nearly stuck with a slide back. 9.675

SEMO will only be putting up five athletes on floor.

Molina (CC ex): Split jump, straddle half. HS BHS LOSO. An arm wave. Switch leap, tuck 3/4. A little butt kick like on the tuck shape. Front Aerial, pretty low and long but pulls it around. Gainer front full dismount as the warning bell rang. Looked like her foot slipped, sat it down today. 9.100

There were so many redeeming factors in that rotation. SEMO put up some pretty strong floor routines. Some of the scoring was a bit sporadic in my opinion, but no one asked. Centenary really brought it back together in that rotation, avoiding a fall counting in the team total. Kennedy Stephens entered her first lineup of the season with a splash. Her lines were just stunning. I couldn’t handle it.

Maxwell (SEMO): BHS LOSO. A little awkward in the air, with a check. Solid jump series. RO back 1.5 dismount. Good lead off routine! 9.700

Speller (SEMO): Front Aerial…no. She fell. Front Aerial BHS with some feet. Switch half was so pretty. Front toss to scale. Lovely. Punch front full, took it too far out with a step back. 9.050

Huff (CC): The hats are out. Double tuck, good control. The crowd is dancing with her. Love. Rudi, double stag. Wild on that jump. Switch side, wolf full to belly splat. Back 1.5, front layout. A little on her heels but good. 9.600

Webb (SEMO): Front toss to scale. Wow. Switch leap, split 1/4. Idk about that connection. It was slow. Front Aerial. Not quite around. More push please. Front Aerial, swing down. A woman after my own heart. BHS gainer full. A hop back. 9.475

Lavelle (CC): Double pike. Nice and high. Front lay, tuck full. Stayed just in bounds. Good amplitude on her leap pass. Double tuck, three steps back and a fall out of bounds. It was such a good routine until that fall. 9.000

Sanders (CC): Double pike, solid. Switch side, popa. Rudi, double stag. Better this week, more controlled. Front full, front layout with a small hop to the side. ALL FOR BIG SYL! 9.800. I’m crying. Coach Harris is pumped about it. Did a little heel click in her wedges.

They took my scores away so that’s fun. We caught SEMO on a somewhat off night. There were flashes of the Redhawks’ usual genius, but inconsistency was a struggle throughout. Putting five athletes up on two events seemed to hurt the team some. Vault was stunning, but bars and floor were forced to count falls because there wasn’t a sixth athlete. Lydia Webb was lights out on three events, going top-three and leading her to an all around victory.

Centenary’s bar rotation really drug the team total down. The other three events were relatively solid without falls counted. However, some of the mistakes made tonight were from individuals who don’t typically slip up. Some highlights were Kennedy Stephens’ beam, Taylor Ann Wilson’s bars and Kendall Sanders’ floor. Both were season highs.