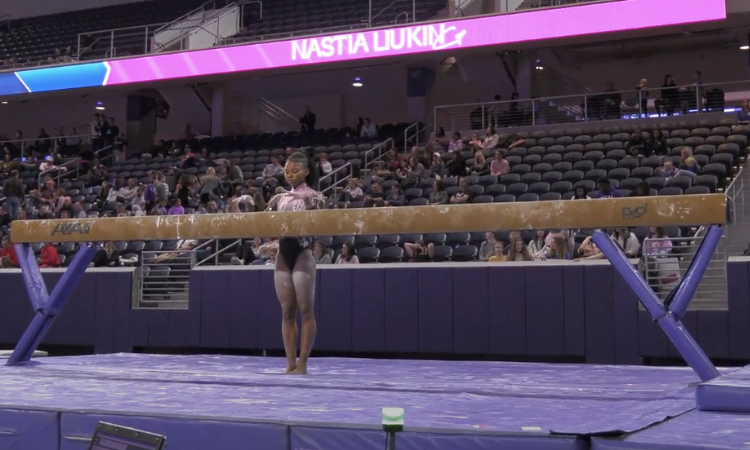 Former elite Jamison Sears won the Nastia Liukin Cup with a big 38.950, the third highest score ever posted in the 12 years of the competition. The Alabama commit, in the class of 2023, had some form issues on bars but delivered a stuck Yurchenko full on vault and solid performances on beam and floor. Right now, the latter two apparatuses are the ones that could have the greatest impact on the Crimson Tide’s lineups in two years. On beam, Sears impressed with a back handspring to layout to two feet and a stuck double tuck dismount in combination; on floor, she opened her routine with a sky-high double layout.

Michigan State signee Nikki Smith, the highest qualifier to the Cup, finished second despite tying with Sears (38.950)—although there’s still a question about whether the tie is broken or not after Liukin herself said she wouldn’t break ties after having she lost out on the gold medal on bars at the 2008 Olympics. Nevertheless, Smith had a solid performance on all events, which included her big Yurchenko 1.5 on vault and a full-in on floor. As the second five-star recruit to join the Spartans in two years, Smith will be a game changer for the rising program on all events, but especially on vault where the team will capitalize on her 10.0 start value.

Avery Neff, in the class of 2024, finished third in her senior NLC debut one year after finishing second in the junior competition (38.925). As expected, she posted the highest scores on the day on vault for a stunning Yurchenko 1.5 and on floor, but some uncharacteristic nerves on beam prevented her from claiming victory. Once she’s able to commit to college in June, Neff will likely receive offers from all the top schools in the country. Where she will commit is anyone’s guess!

UCLA signee Selena Harris, who was leading after the third rotation, finished fourth (38.750). As we’ve come to expect from her, she had a stellar all-around performance, but some lack of difficulty on floor prevented her from notching the top spot. She’s nevertheless expected to contribute to all four lineups as a Bruin next year; she will be especially useful on bars, where UCLA has been lacking depth this season.

Despite an underwhelming day on three of the four events, Oklahoma commit Hannah Scheible became a Gymternet sensation thanks to her incredible acting skills on floor.

2025 graduate Kamila Pawlak, one of the favorites to notch the top prize, won the junior competition with a big 38.775—the highest score ever posted by a junior at the NLC. She impressed with a poised all-around performance, which included a floaty full-twisting Yurchenko on vault and a big full-twisting double pike on floor. Her beam and floor routines, as well as her vault, could already interest some of the top NCAA teams.

Another favorite to win the title, 2026 graduate Presley Duke, was second with a 38.600, which is the second highest score ever posted by a junior at the NLC. She continued her streak of exceptional performances this year, topping her day with a big 9.775 on bars—she performed a Maloney to Pak salto and a full-in dismount.

Jasmine Cawley, the highest qualifier to the Cup, was third (38.250). She struggled with nerves on beam but posted the highest score of the day on floor, tied with fourth-place finisher CaMarah Williams, thanks to a delightful routine made of difficult tumbling—she opened with a full-in—and a beautiful choreography.

READ THIS NEXT: 2022 Nastia Liukin Cup Qualifiers Behind the Numbers