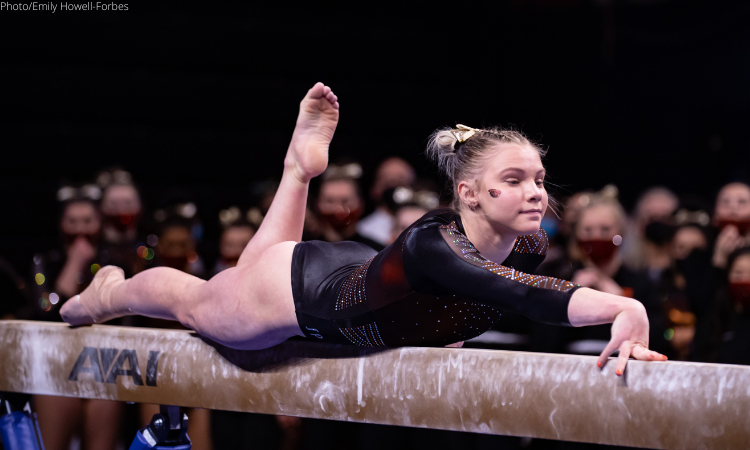 The 2022 regular season is almost over. With just two weeks of competition left before teams begin preparing for conference championships, it’s clear that a handful of teams were greatly impacted—for better or worse—by something game changing, be it a new coach, superstar freshman, stellar fifth-year class or major controversy. We rounded up 10 game changers that have set the 2022 season on its course.

Rookie head coach Jen Llewellyn—who came to Washington after seven years at the helm at Division II’s wildly successful Lindenwood and a standout career as a gymnast at Oregon State—has visibly changed the mood for the Huskies. Former head coach Elise Ray resigned before the 2021 season. Her former assistant Ralph Rosso took the helm for what was the team’s worst year since at least 1998. So far under Llewellyn, the Huskies hit their first 197 since 2020. They also brought in freshman Deiah Moody as a late commitment change and brought back fifth-year Geneva Thompson, who publicly said she wouldn’t have returned if it weren’t for the coaching change. Sophomore all-arounder Skylar Killough-Wilhelm is also living up to the potential she brought to Seattle after struggling her freshman season. Things are looking up for Washington.

UCLA: Racism and Its Fallout

It’s the elephant in the room: UCLA head coach Chris Waller and athletic director Martin Jarmond have come under fire from UCLA gymnasts—most visibly Norah Flatley, Marz Frazier and Sekai Wright—for mishandling an incidence of racism within the program, committed by Alexis Jeffrey who has since transferred midseason to LSU. Regardless of the details of the racism itself, the situation has torn UCLA apart at the seams. There is visible tension between athletes and the coaching staff, gymnasts have publicly called for Waller’s dismissal and the team performance has suffered under the weight of the situation, including UCLA’s first loss to Arizona State since 2001 last weekend. The Bruins have suffered a number of injuries, gymnasts are making uncharacteristic mistakes and the magic the public associates with UCLA is dampening. Despite that, Wright has still managed to go viral with her spectacular floor routine that ends with a Black power fist, proving UCLA may be down, but it isn’t out.

Superstar freshman and Olympian Jade Carey has been committed to the Beavers since before her elite breakout. She deferred several seasons and finally landed in Corvallis to great success. Carey has competed in the all-around every week of her rookie year, remarkably only scoring below a 9.900 twice in 24 collegiate routines so far. She has two perfect 10s, on bars and floor, and a 9.975 on every event. Carey is arguably having the best freshman season in NCAA history, and she’s lifting the Beavers as she goes. With four scores over 197 in six meets, Oregon State is not to be trifled with in 2022.

During the preseason, San Jose State’s head coach Joanne Bowers noted that people were sleeping on the Spartans. Eight weeks in, it’s abundantly clear that she was right. Consistency has been the ticket to San Jose State’s No. 32 ranking. There has been a down meet on bars and some lower beam numbers, but all in all the Spartan’s are a remarkably consistent group, regularly right in the 49.100 to 49.300 sweet spot on events. All-arounders Jada Mazury, Judai Lopes and Lauren Macpherson have led the way. Each owns a high score of 9.900 or better on a different event, contributing to the Spartans’ strong numbers across all four. Look for San Jose State to try to capitalize on its steadiness with a regionals berth.

The Redbirds’ No. 28 vault ranking is no accident. Alana Laster, Jaye Mack and Angelica Labat all compete Yurchenko 1.5s that are clean and stickable. The lineup shines and has given the Redbirds an edge against its conference foes. The Redbirds have so far bested MIC rivals Lindenwood—which has its own 10.0 start value vault threat in Gayla Griswold—twice and SEMO once. They’re on track to take the conference title in March.

The Spartans only competed twice in 2021 due to COVID issues, so the sophomore class came into 2022 with very little experience. That hasn’t dampened their talent, with Baleigh Garcia, Delanie Harkness and Giana Kalefe all putting up big numbers so far. The freshman class features star all-around duo Skyla Schulte, a former five-star recruit, and Gabi Stephen, who owns a perfect 9.950 on her Yurchenko full. The underclassmen have Michigan State on track for its highest finish in years. The Spartans secured a berth to the premier night session at the Big Ten championship meet in Columbus, and upset Minnesota for a first-place finish at their session of Big Fives last week. The icing on the cake is Spartan signee and five-star recruit Nikki Smith punching her ticket to this weekend’s Nastia Liukin Cup and scoring a perfect 10 on vault. The future is bright in East Lansing.

Former Georgia head coach Danna Durante’s name was tossed around for a lot of coaching vacancies over the past several years, and she finally landed with the Tar Heels. She immediately elevated the program, putting big road meets on the calendar—North Carolina heads to Georgia on March 12—and bringing headline meets to Carmichael Arena, including Auburn and Suni Lee. She also invited Mike Smith, LSU’s PA announcer and gymnastics community staple, to announce the Tar Heels’ preseason intrasquad. North Carolina’s recent success isn’t all down to Durante, though. Longtime assistant coach Marie Case Denick, who also served as interim head coach in 2021, did some excellent recruiting. Freshmen all-arounders Lali Dekanoidze—a former five-star recruit—and Julia Knower adjusted to college competition quickly and have been a key part of the Tar Heels’ success.

Suni Lee is a name that needs little explanation. The freshman Olympic all-around champion has drawn crowds wherever she competes in 2022. She owns high scores of 9.950 or better on each event, including a perfect 10 on bars and a 9.975 on beam. Lee has needed little time to adjust to the collegiate atmosphere and has handled the media attention gracefully. She’s not alone, though. Lee’s classmate Sophia Groth has also been excellent, topping out at a 9.950 on beam with an average of 9.904 there. Groth added bars for the first time at Georgia last week, scoring a 39.450 in her first all-around outing. Together, Groth and Lee—along with senior Derrian Gobourne— have given Auburn the big numbers it needs at the end of lineups to compete with and even beat some of the best teams in the country.

Lexy Ramler and Ona Loper’s decisions to use their extra year of eligibility to return and compete with the Gophers has been fortuitous. While Minnesota brought in a big freshman class headlined by former four-star recruit Haley Tyson, it was unclear just how the Gophers would maintain their level of success after Ramler and Loper graduated. The incoming routines just didn’t fill the holes. By returning, Ramler and Loper ensured Minnesota had one last shot to push for a national finals berth before a rebuilding phase. Beam issues have plagued Minnesota the past two weeks; if the fifth-years get things back on track, Minnesota has a competitive shot at nationals.

The Tigers have sat just outside the nationals picture for decades, with just one appearance since 1998 in 2010. 2022 has been off to a stellar start, with freshmen Jocelyn Moore and Amari Celestine adding big numbers on their events. All-arounder Sienna Schreiber is also having a breakout year. The junior has always been strong on all four but put up a new career-best total in 2022 and has been incredibly consistent, with no major misses so far this year. Her leadership plus the added punch of Moore and Celestine may just be enough to get Missouri to Fort Worth.

It’s impossible to talk about the course of the 2022 season without a nod to the situation in Denver. The Pioneers are notorious for small rosters; 2022’s is just 14 gymnasts. When fifth-year and national all-around title threat Lynnzee Brown went down with an Achilles injury, it became unclear who would fill her four lineup spots. Fellow fifth-year Mia Sundstrom was one of the gymnasts who stepped up, adding floor to her program at Metroplex for the first time since 2019. She, too, tore her Achilles, meaning Denver is now also without her steady vault and bars numbers and beam availability. We have yet to see what the Pioneers will do to fill those spots, but it’s looking increasingly likely that we won’t see Denver progress far in the postseason or repeat its upset of Oklahoma at the Big 12 championship.

READ THIS NEXT: 10 Meets That Will Define the Second Half of the Regular Season