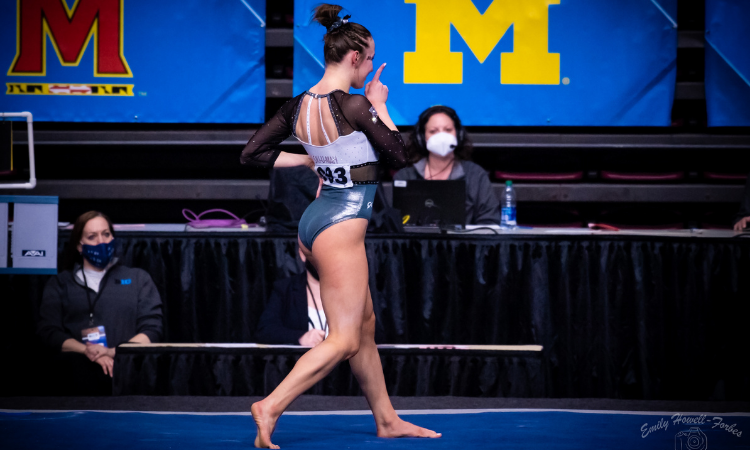 As the new year—and season—approaches, we wanted to take a moment and look back at the predictions we made before 2021. What did we get right and where were we off base? We tried to pull out any mentions we could find of strong prediction language in our previews and recaps, and did our best not to cherry pick to make ourselves look smart. You can be the final judge. How’d we do?

Our internal preseason poll had Florida taking the title, with Oklahoma, Michigan and Utah rounding out the top four.

We certainly got the winner wrong but came out with the correct final four. Our other national qualifiers were UCLA, LSU, California and Denver. While Cal and LSU were correct, Alabama and Minnesota qualified and UCLA and Denver did not.

When we’re on, we’re on. Johnson is a spectacular performer, and this one felt all but inevitable.

Reality: Florida and LSU, in their dual on Feb. 12

Oklahoma, who we had in second place, hit the mark the next day on Feb. 13.

Which Senior Will Win the AAI Award?

She’s in a league of her own, what can we say.

Which Gymnast Will Have a Breakout Year?

This one is subjective! That said, it could arguably have been Abby Heiskell who debuted in the all around and whose national final beam set clinched the title for the Wolverines. Schoenherr did also have an outstanding year, and we saw a 10.0 from Doggette at regionals.

This is also subjective, but given that Bryant took the SEC FOTY award, tied for regional gymnast of the year and tied for the NCAA vault title, we’re comfortable calling her the top of her class.

Which Non-Regionals Standby Will Make the Top 36 This Year?

Well, you can’t win ‘em all. The Spartans’ season was unfortunately only two meets due to COVID issues in the program.

Who Is the Most Underrated Coach in the Country?

Subjective and not fully a prediction either. That said, the Howells did win Pac-12 Coach of the Year, and Cal had a historic season.

Who Is the Most Underrated Gymnast in the Country?

You decide if we were right, but Webb broke out and took the national all around title, so we know how we feel about this one.

Which Team Will Outperform Its Traditional Standing in 2021?

Reality: Many teams, including Michigan

The Wolverines won their first ever title in 2021.

Stuff We Said During the Year

We had fun going back through old Mounts and Dismounts to see what we were thinking as the season wore on.

“Michigan’s total is the fourth-highest in the nation as of Saturday night and puts the Wolverines in lofty air with Oklahoma, LSU and Florida. With room for improvement on landings, wobbles and handstands, Michigan has a case as a national championship dark horse.” – recap of Ohio State at Michigan

We just had that feeling about the Wolverines from the word go. We’ve said this about more than one team over the years and been wrong, but in 2021 we were spot on.

“The Gators had yet another solid night with some unfortunate misses on beam, including the second in a row from Trinity Thomas (not a fall, but she put her hand down); it’s nothing major to worry about yet, but it’s certainly something to watch going forward.” – recap of Florida at Arkansas

Much as we had that good Michigan feeling, we felt like something was off for Florida early, despite the No. 1 ranking the Gators held at the time.

“Arkansas continues to prove itself as a prime candidate for the evening session of the SEC championship and a team on its way to a potential national championship appearance.” – recap of Akransas at Georgia

By week four we were pretty sure the Razorbacks were on track for an outstanding season. They did make the night session but missed out on nationals, so we’ll call this one 50/50.

“Despite graduating half their routines in 2020, the Lions reasserted themselves as the best team in the MIC and in USAG.” – recap of TWU at Lindenwood

Conference rival SEMO would go on to best the Lions at USAGs, but Lindenwood did indeed win the MIC title in 2021, so we were 50/50 on USAG teams halfway through, too.

“Georgia has all the potential to be a top team in the country and get back to nationals in 2021.” – recap of Alabama at Georgia

This…turned out to be not so correct. We suppose the potential was always there, but nationals—and even the regional final—was not in the cards.

“SEMO broke through as a major national championship contender at this meet, joining Lindenwood and Texas Woman’s in the exclusive 195 club with rotation scores above 49.000 on both beam and floor.” – recap of Centenary and Illinois State at SEMO

We started to see the future-USAG champs for the contenders they were in week eight.

“Don’t assume the outcome is a foregone conclusion: Iowa State and West Virginia have given Oklahoma and Denver a run for their money at several points this season, and they’re looking stronger than ever.” – Big 12 preview

We had a feeling this would be a fun one, but we really didn’t see Denver upsetting Oklahoma coming.

“If absolutely any team in this meet has even a shaky event, the other three will be poised to pounce. It is Michigan’s meet to lose, but it’s far from a sure thing.” – Big Ten Session Two preview

Ditto for Minnesota nabbing the Big Ten crown over Michigan.

“Florida is the favorite to win, but the Gators have underperformed at the meet in the past.” – SEC Session Two preview

We didn’t see Alabama coming, either. Let’s chalk conference champs up to not our most prescient week!

“The Wolfpack has a chance for one of its best finishes in recent memory,” and “Minnesota and Denver will likely face Florida and Illinois in the final.” – Athens preview

We were as aghast as anyone that N.C. State was put into a play-in meet in 2021, but we recognized that it still had a shot at greatness. Boy did the Wolfpack live up to that, qualifying to the regional final and finishing at No. 15, its best finish since 1999. As for our regional final prediction, N.C. State nabbed the last spot while the Illini finished in seventh.

“Rutgers’ Hannah Joyner can make a realistic push to qualify to nationals despite not having the benefit of competing with her team at regionals. The sophomore has an NQS above 9.850 on every event, including 9.919 on beam, making her a threat on the event and in the all around.” – Morgantown preview

Joyner did indeed head to nationals on beam!

“Audrey Barber has a strong chance of qualifying as an all arounder. The senior can score 9.900-plus on each event and has found consistency in her performance within the last few meets for the Terps.” – Tuscaloosa preview

Here’s one we missed. While Barber had a strong meet, even debuting a new Yurchenko 1.5, her 39.300 wasn’t enough to send her to Fort Worth.

“The Utes seem to be peaking at just the right time to make a run at nationals.” – Nationals team preview

We said this in the context of Utah perhaps advancing over Alabama and LSU into the national final, which did happen by the slimmest of margins.

“When looking at averages, Anastasia Webb, Ona Loper and Haleigh Bryant most consistently hit the 9.9 mark. However, Bryant’s front handspring pike half is the clear front runner; if she nails the landing, she’ll be all but impossible to beat.” – Nationals individual preview

Bryant lived up to the hype and tied with Webb to become the 2021 national vault champion.

We missed the mark on bars, where Maya Bordas and Maile O’Keefe tied for first with Luisa Blanco finishing in second.

“With Thomas questionable, [floor] is shaping up to be a battle between Kiya Johnson and Lynnzee Brown.”  – Nationals individual preview

We blew this one too! Lexi Graber, Webb and O’Keefe all tied for the crown.

READ THIS NEXT: 2022 Predictions