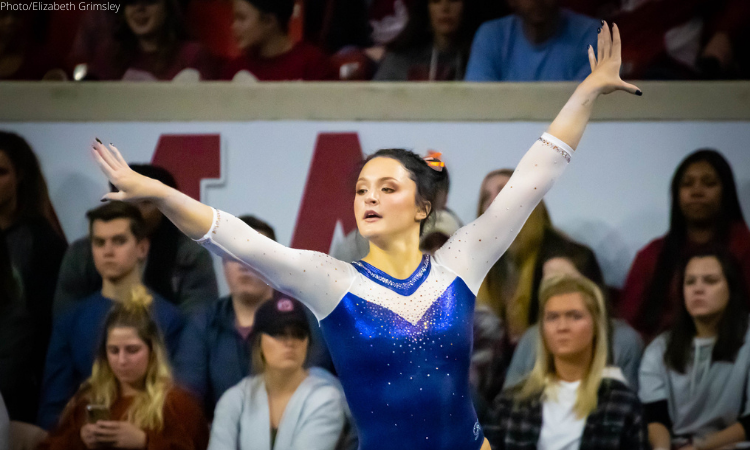 Basketball has its whole “sixth man” thing, so we thought it would be nice to recognize the gymnasts that are on the fringe of lineups but are always there to save their team’s butt when needed. So today’s prediction introduces a new term to the NCAA gym world: seventh routine. Who’s your seventh routine MVP for 2022?

Which Gymnast Will Have the Most Valuable Seventh Routine in 2022?

Elizabeth: There are so many gymnasts who are so valuable to their teams as that seventh gymnast up, so I struggled to pick my top contender. It only felt right to go with a Florida gymnast since the team is so deep on every event that even routines that would be lineup staples at other universities are forced to sit out on a weekly basis in Gainesville. That’s why I went with Savannah Schoenherr. She won’t likely be an everyday all arounder for Florida in 2022, but she has the potential to hit 9.9-plus on all four, no matter when or where she’s needed.

Carolyn: Michigan is such a talented team that even the gymnasts that provide depth can hit if the team needs them to. Jenna Mulligan did such a solid bar routine in an exhibition back in November that I can see her comfortably competing in the second or third spot in a meet this year; even if there is a warmups injury from a gymnast that makes her a last-minute substitution.

Emily M: This is such a hard question! Emily Gaskins had to step in in a big way for Alabama when Lexi Graber was out for a meet last year, and hit three back-to-back 39.300-plus all around totals. Having her 9.900 level routines in their back pocket is exactly what the Crimson Tide needs again this year.

Brandis: Like Elizabeth mentioned, depth will be at a premium for Florida this season. Payton Richards is a gymnast who has been a lineup stalwart for the Gators previously but I think may slide down into that seventh spot on a few events this season. However, she will come in clutch several times this season when giving gymnasts rest and as an injury substitution, making her a valuable asset to the team.

Rebecca: I expect UCLA’s beam drama to be a continuing story in 2022, so my pick for this question is whichever less-famous beamer can step up in a pinch when the bigger names are struggling. I’m not sure who exactly that will be, but it could be someone like Kendal Poston.

Ryan: UCLA’s lineups could look a lot different this season, so there are a couple of good choices. Chae Campbell was fantastic in 2021, but I could see her having trouble keeping her bars and beam spots. Thankfully the coaches know they can trust her on any event if they run into injury or consistency issues.

Tara: Florida has so much depth this season! Like Brandis, I’m going to go with Payton Richards. She may not have the recognition of other Florida gymnasts, but she’s quietly made a name for herself. Yet, with the depth Florida has, she may not see herself in as many lineups as she has in the past. She’s definitely proven herself as a formidable option and will be a valuable asset to the team in those times where injuries hit or gymnasts need to rest!

Talitha: I’m going to say Payton Richards, too. After showing some nerves last year, Richards looked solid in recent intrasquad videos, but the competition from the exceptional freshman class is almost suffocating… She has her Yurchenko 1.5 back, though, so she may be a lock at least on vault.

Katie W: Jena Swanson is a steady competitor for Missouri on all four events. She’s coming back from a torn ACL last spring but is a key backup routine on bars and beam especially with the impressive incoming Missouri class.