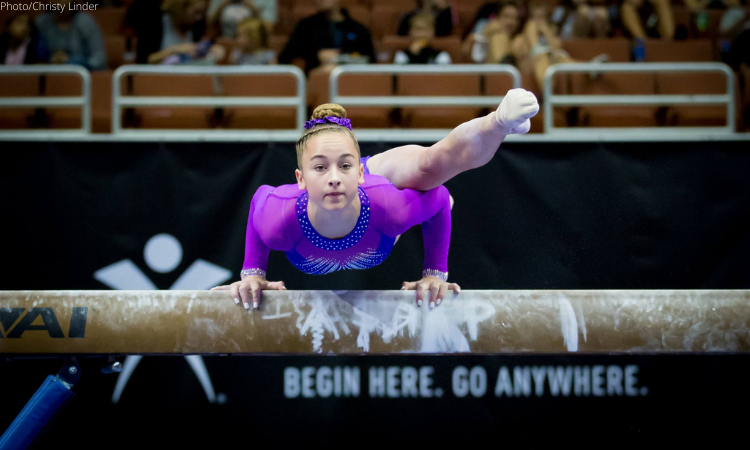 We love to see gymnasts with loads of potential finally use that talent to help their team to glory. Who will be this year’s Abby Heiskell or Savannah Schoenherr?

Which Gymnast Will Have a Breakout Year in 2022?

Elizabeth: This feels like a risky answer with all the uncertainty surrounding Stanford literally all the time, but I’m going to say ​​Kyla Bryant. She’s in her final year and is poised for something special. Plus, maybe a weird 2021 will be the rest and fuel she needs to dominate in 2022.

Carolyn: Although she hasn’t competed NCAA before due to injuries, I really, really hope Linda Zivat gets the year she deserves. After transferring to Iowa from Michigan State and seeing her Instagram story training updates, it looks like she is poised for a big debut in January.

Emily M: It’s time for Skylar Killough-Wilhelm to shine. She had a rocky freshman campaign, but with Jen Llewellyn now at the helm in Seattle, I think she’s going to rise to her potential and have a great year.

Brandis: Staying on the mostly Pac-12 trend, California’s Andi Li is primed for a great season. After some blunders early into her freshman season last year, Li found herself as a key all arounder during the Golden Bears’ seventh place run. Expect to see her name near the top of several event rankings this season.

Katie W: Kai Rivers from LSU has been hindered by injuries in her first two years of competition. Rivers brings huge all-around potential and has one of the strongest Yurchenko full vaults in the NCAA. She looked fantastic at GYM 101 and I expect things to only go-up from there.

Rebecca: I’m expecting a strong year from the Alabama juniors, several of whom have had lingering injuries over the past few years. Mati Waligora in particular was a floor superstar in level 10 and looks poised to become a leg event juggernaut.

Ryan: A lot of us swooned over Audrey Davis on bars last season, but she was a consistent part of Oklahoma’s vault and beam lineups as well. At the team’s latest intrasquad, she showed a beautiful floor routine that plays to her strengths in twisting and leaps, and she has been working on upgrades for both vault and bars. There could be some massive all around scores in her sophomore season and beyond.

Tara: Linda Zivat ​​didn’t compete due to injuries (and then Michigan State’s weird 2021 season) during her first two seasons, but there’s big potential there. She also transferred to Iowa from Michigan State, and I think the change of scenery plus finally being healthy will bode well for her.

Talitha: I’m going to go with Audrey Davis. With floor likely to be added to her repertoire, a new bar dismount and hopefully a less scary Yurchenko 1.5, this could be Davis’ year.