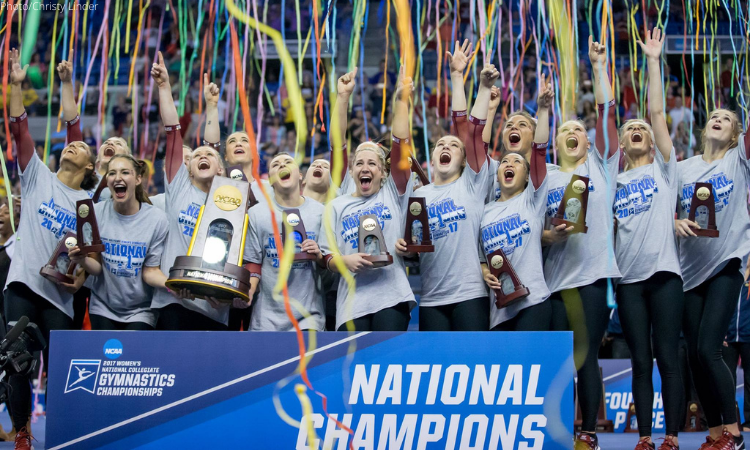 Collegiate gymnastics has continued to evolve since its first national championships in 1982. Through rule changes and increased difficulty, some of the NCAAs oldest records have continued to stand the test of time. The recent influx of Olympic and elite talent has revolutionized the sport once again, putting many records on the hotseat. This season’s freshman class alone features four Olympians and three Olympic alternates from the United States—and that’s not even including all the international talent that has made its way to the NCAA as well. With the bar continuously being raised, the clock is ticking on many college gymnastics records. We wanted to take the time to celebrate records that still stand before they are matched or overtaken by current NCAA talent.

In our last look at NCAA gym records, we looked at the most UNbreakable records. These are the records that have lasted for ages for a reason, whether changes in the code of points or judging tendencies. Our inner gym fan desperately wants those unbreakable records to come crumbling down, but realistically it will take years (if ever) for those dreams to come to fruition. However, today we wanted to take a look at the records that very likely could fall within the next season or two based on the current NCAA gym climate.

In 2017, the Sooners dominated the Super Six final to take home their second straight championship, topping second place LSU by over half a point and posting the highest winning team total in NCAA history. While any score in the 198s is impressive, this total is under threat to be broken every single year with the talent that the nation’s top teams are able to boast. Oklahoma almost beat its own record two seasons later posting a 198.3375 to win the title in 2019, and last season Michigan fell just short as well with a 198.250, good enough for third highest of all time. Keep an eye on this number come April.

With the influx of talent entering the NCAA on a yearly basis, team scoring records are constantly under threat to be broken. This season, Denver and Iowa both appear primed to post record-breaking totals with each team returning a majority of their rosters and with hopes of capitalizing on the positive momentum they generated to finish out 2021.

The Hawkeyes ended their 2021 season with their highest total of the year, falling just one tenth short of the program record 197.150 from a 2004 away meet at Maryland. The quartet of JerQuavia Henderson, Adeline Kenlin, Lauren Guerin and Clair Kaji will be an unstoppable force, particularly on floor, and will give Iowa an excellent shot of reaching the mid-197s.

Denver also fell just one tenth short of its all-time high last season, just shy of the 197.875 the Pioneers posted in the winter of 2004. The Pioneers have been on the upswing the past few seasons, steadily climbing the rankings and asserting themselves as a top contender. With the past few recruiting classes and Lynnzee Brown returning for one last season, Denver seems to have exactly what it needs to make a realistic push at not only the record, but potentially breaking the 198 barrier.

This popular yet long-standing record may finally be tied or broken within the next few seasons. Since Georgia has taken a step back nationally from when it racked up titles in the mid-2000s, other teams have started claiming titles and are inching closer to the Gymdogs’ giant total. Utah currently sits in second place with nine championships, and with the Utes as the Pac-12 favorites and a top five team heading into the season, we could see the record tied as soon as this April. UCLA currently sits in third place with seven championships, and with a freshmen class loaded with Olympians and international elites, the Bruins will have a shot at closing the gap over the next couple years.

In 2021, the NCAA gymnastics championship made its ABC debut and subsequently increased viewers by over 500% compared to the 2019 championship. 808,000 fans tuned in live to watch Michigan claim its first team championship in school history. With the recent Olympic Games and several of the Olympians we know and love finding their way onto NCAA rosters, expect the popularity of college gymnastics to only increase this season. The 2022 championship could feature names like Sunisa Lee, Jordan Chiles, Emma Malabuyo, Grace McCallum, Kara Eaker, Riley McCusker, Leanne Wong and Jade Carey—just to name a few. With the talent level that high, competition for the national title is bound to be stiff. With close competitions comes more suspense for the viewers. Here’s to hoping that the increased popularity and visibility of Olympic gymnastics in 2021 will carry over to new record viewer numbers in 2022.