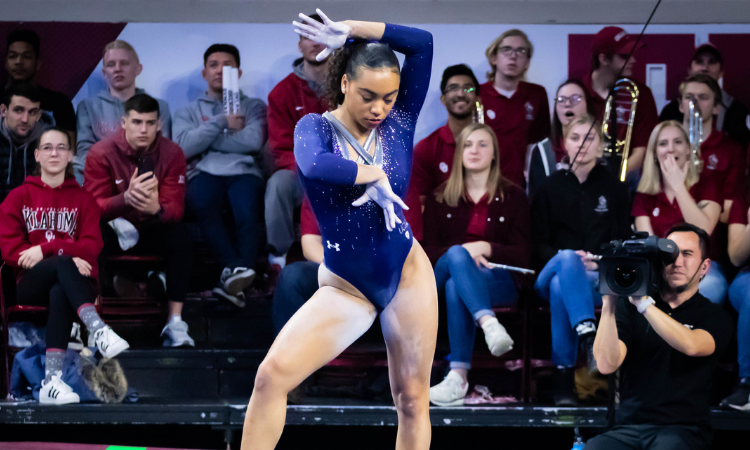 When the 2020 gymnastics season came to a halt nearly two years ago, collegiate gymnasts found themselves with more free time on their hands than they had in years. To remedy this issue, many turned to TikTok.

During those months, LSU gymnast Olivia Dunne reached celebrity status with her trending videos; however, other collegiate gymnasts have become popular on the app as well, albeit on a smaller scale. UCLA gymnast Margzetta Frazier, who goes by the username @Margzettaaa, began her own trend of commentating videos on the platform, which helped her gain followers.

“I started posting videos of me commentating my own routines and then people just kept asking for more. I guess they thought it was funny to hear about what I’m thinking,” Frazier said. “My dad gave me the commentating idea and that seemed to really take off. Everyone started adding their little spin on theirs. Like one guy does what he’s thinking when he’s modeling.”

Frazier has amassed 276,600 followers on the app throughout the past two years and over 9 million likes. Her content varies from commentating videos, to comedy and gymnastics compilations.

Similarly, Florida gymnast Savannah Schoenherr, who goes by the username @Sav.fs, began to grow her platform of 26,900 followers on TikTok and 1.5 million likes after a video of hers went viral in January of 2020. Schoenherr primarily comes up with ideas for content by what’s trending on the app.

“If I see something that’s sentimental or whatever might be popping up in my For You Page a lot, I just like to recreate those videos just because I think it’s a lot of fun, whereas my other social medias feel like it’s a little more serious,” Schoenherr said.

Keeping with the idea of having fun, Schoenherr has used the app and participated in trends as a way to bond with her teammates, most recently participating in the outfit transition trends and white lies T-shirt trend.

“I consider all my teammates like my sisters—we’re all super super close—but just doing stuff like that, especially when you’re at practice, kind of adds a little extra enjoyment to the day and just kind of makes practices more fun or makes going to the gym more fun,” Schoenherr said.

While a fun way to express themselves, TikTok fame can also lead gymnasts to possible sponsorship deals. While Schoenherr hasn’t begun a brand deal through TikTok yet, she has had brands reach out to her and appreciates having another way to get her name out. “I feel like it just really helps to kind of put your name out there for brands to notice you, so that’s kind of why I’ve been utilizing it more lately,” Schoenherr said.

Ultimately, Frazier has enjoyed the opportunity to expose new fans to gymnastics in an environment that’s more relaxed and casual. “I think it’s cool to introduce new audiences to the sport, especially from a lens that is more from a comedic side,” Frazier said.