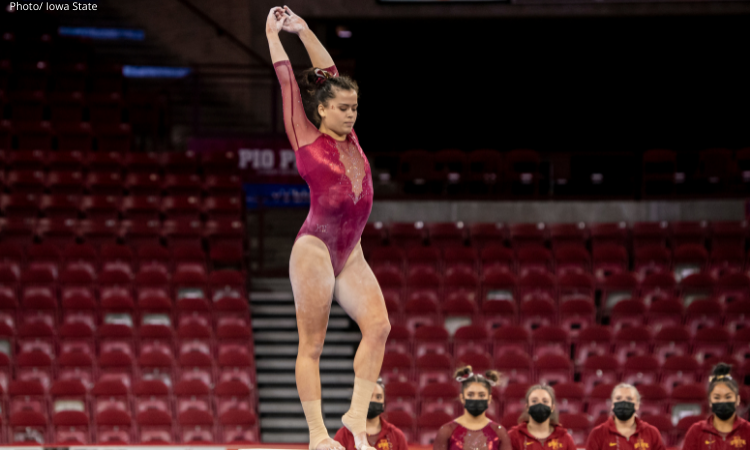 Elite gymnastics used to be the end of a career for many gymnasts. But the rise of college gymnastics has meant more and more elites have turned to compete in the NCAA rather than retirement. Peruvian national team member Ariana Orrego is one of those gymnasts having taken the leap after her first Olympic experience in 2016.

“Her Olympic experience in Rio was turning out to be her last gymnastics event of her career and then she was going to be done,” Iowa State head coach Jay Ronayne said. But the Cyclones’ assistant coach and recruiting coordinator Nilson Medeiros was present at the games and invited her to check out NCAA gymnastics as an opportunity to extend her gymnastics career a few more years.

Orrego is one of ten international athletes on the 2022 Iowa State roster, a recruiting tactic implemented by Ronayne in recent years. Prior to 2019, athletes were committing to colleges in their freshman years of high school. This made it difficult for international athletes, who often begin their recruiting process a bit later and who often need a scholarship to be able to attend, having a more difficult time finding home for college due to limited openings. Ronayne used this observation to his advantage, deciding the international space had untapped potential for recruiting.

“I didn’t have any connections outside the U.S., but I had an opening for an assistant coach and one of the applicants had all kinds of connections,” Ronayne said. “I ended up hiring [Nilson Medeiros], and it just started from there.”

Iowa State has become a hot spot not only for international elites but for those looking to train for both elite and college simultaneously.

Orrego made a return to the elite scene in 2018 at the South American Games on beam and floor. The competition inspired her to compete at the Pan American Games that year in her hometown. The series of elite competitions eventually led Orrego to qualify to her second Olympic Games in Tokyo.

Initially the Peruvian National Team member deferred her 2020 college season to train for the Games, but COVID-19 derailed those plans and postponed the Olympics a year to 2021. Orrego was left balancing four college classes, elite gymnastics training and NCAA gymnastics obligations during her junior year.

“I would come in [the gym] in the mornings and train for two hours, then go back home and do some school and then come back to train for three hours and then back home for more school and rest,” Orrego said, noting she would train twice a day three or four times a week.

While it was difficult, she showed that competing in college and continuing to pursue elite goals is a feasible option. Freshman Marina Gonzalez is coming off her first Olympic Games, where she represented Spain in Tokyo. Not only is Gonzalez still hoping to train elite, but Paris in 2024 is in the back of her mind.

“We are fortunate enough that our coaching staff is capable of assisting with elite training,” Ronayne said. In fact, the resources the university staff has to train athletes at both levels was a selling point for athletes like Andrea Maldonado and Marina Gonzalez who want the NCAA experience while continuing to pursue elite competitions as well. Plus, Gonzales was inspired to consider Iowa State after watching two former Spanish teammates, Ana Palacios and Natalie Ros Vaquer, compete for the Cyclones.

The number of international elite athlete success stories from Iowa State has created more opportunities for recruiting talent domestically and internationally, too.

“Recruiting is never easy on any level, but more doors are open for us than there were six or seven years ago,” Ronayne said.