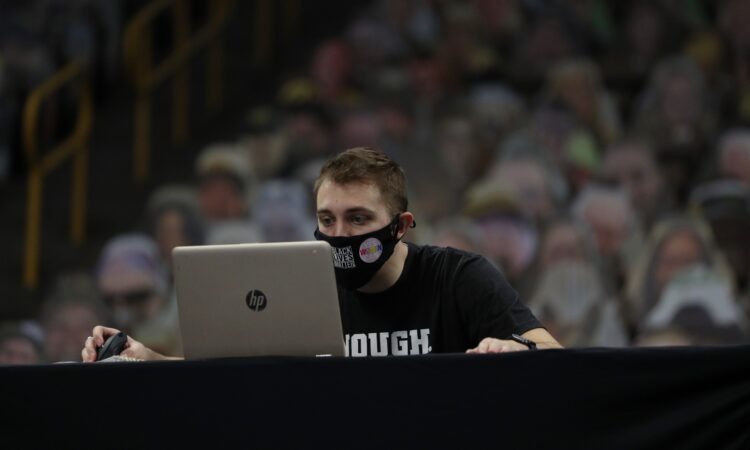 College gymnastics teams around the country have varying budgets, staff sizes and followings, but one thing they all have in common is a designated media contact responsible for promoting the team and establishing th brand.

At smaller schools, coaches take on this responsibility; some universities have graduate students take the reins. Regardless, the person in charge of this role has the potential to create a brand that is instantly recognizable and helps showcase the best of the sport and the school. For gymnastics, a sport that traditionally received less attention, this is especially important.

Kendra Willard, Auburn’s sports information director for women’s gymnastics, discussed the uniqueness of the SID role as it pertains to the sport. “People have a lot of ideas about what gymnastics is outside of the college level,” she said. “SIDs help to show how cool college gymnastics can be. Having Olympians enter the sport over the past few years has put gymnastics on the map, and being in the SEC, it’s cool to help promote that.”

Willard works primarily with gymnastics and the equestrian team, so she can devote considerable time to promoting the sport. Auburn head coach Jeff Graba spoke to the importance of an SID who fully understands the sport they’re covering, especially gymnastics.

“The good SIDs have expanded their role into knowledge of our sport,” Graba said. “For every SID we’ve had, we try to bring them to the gym and have them see what to show. Our goal is to show our gymnasts in the best light possible.”

Graba said he and the rest of his coaching staff have weekly meetings with Willard and other media staff members at the school to ensure everyone is on the same page about the team’s message. Much of that message is spread through social media.

“With social media, you have access to every kind of gymnastics fan, from teenage girls to adult superfans,” he acknowledged. “All their expectations are different but important.”

Across the country in Iowa City, Ryan Ruckdaschel handles media for the Iowa gymnastics team. Ruckdaschel’s title is director of operations, not sports information director, but he still plays a huge role in the team’s social media and public image. He has been the mastermind behind some of the most fun moments in gymnastics social media at the helm of the @IowaGymnastics handles on Twitter and Instagram.

Iowa head coach Larissa Libby chalks up this fun-loving energy to a combination of Ruckdaschel’s expertise and Iowa’s natural camaraderie as a team. “It seems authentic because it’s real,” she said. “It’s almost like reality TV. You get used to having the cameras in there the whole time, so you have it looking like it’s not fixed and put together. Ryan has been around us for so long that he’s made those connections.”

Part of this success, Ruckdaschel acknowledges, is being acquainted with everyone on the team as individuals, which he’s done over the past few years in various roles. “I know everyone on the team very well. Most SIDs have to divide their time among multiple teams, but I get to give all my attention to them, so I can really connect with them. I know which caption will work with which people, and I know which content will help each of them shine.”

One of sports information professionals’ key goals is creating eye-catching content that resonates beyond niche social media channels. Some of these viral moments come years in the making. This summer, Willard used social media to capitalize on the success of incoming freshman Sunisa Lee, who broke out as one of the biggest names at the Tokyo Olympics. Auburn social media accounts were blanketed with all things Suni, from Olympic trials to the closing ceremony. While her moment came this summer, Graba had been anticipating it since her verbal commitment to Auburn in 2017.

“Jeff put it on our radar early on,” Willard recalled. “He made sure we kept an eye on her so that we were ready for the Olympics.”

The pandemic delaying the Olympics played a big role in ensuring this could happen. Had Lee competed in the Olympics when they were originally scheduled in 2020, she would have done so prior to signing her National Letter of Intent, meaning that Auburn could only acknowledge her in a limited capacity. By the time the Olympic process had begun for 2021, though, she had officially signed with the Tigers, so the school could fully promote her.

Graba credits not just the media team at Auburn but the university as a whole for exposing Lee amidst the “international chaos” that has ensued as a result of her Olympic success. “Thankfully, Auburn is a big institution that has bought into trying to get this thing right—not just for Suni, but for us as a team.”

Willard discussed the residual effects of this, and how it created additional media exposure for the rest of the team, too. “Suni is awesome, but our whole team deserves the attention,” she said. “We’re now getting media requests from all over Alabama and Georgia to cover Suni, which means the entire team will be getting the attention, too.”

Other viral moments are the product of the moment. Iowa turned heads last season when it published a three-minute video called “Enough.” The compilation video represented the Iowa team standing up to social injustice, featuring refrains such as “Strength lies in our unity…we are enough, we’ve had enough.”

A team effort, the video came as an ongoing response to the George Floyd protests and subsequent social justice moment. For sports information professionals at that time, “a lot of content had to be produced that wasn’t related to the sport itself,” Ruckdaschel said. “It was a difficult time, and we didn’t want to just check the box of making a post acknowledging what was going on.”

Coming out months after these events, the video was Iowa’s way of “not leaving that content back in June,” he explained. The team considered using it as its introduction video, but decided it was best to promote it mid-season to continue the conversation.

Completely unrelated to gymnastics, the video, which “emotionally changed the team,” was one of Iowa’s most successful social media posts ever.

Libby praised Ruckdaschel’s ability to look beyond gymnastics in working on the project. “A big part of Ryan’s job is reading the room,” noted Libby. “To be able to go big picture is difficult at such a young age; the fact that he could understand the effect of the video, not just in terms of his job but in terms of…the young women we are charged with leading at all times, is so important.”

It’s clear that the role of sports communications professionals goes beyond sports. With the advent of NIL legislation and the opportunity for student-athletes to profit off of their brands, SIDs are facing unique new responsibilities related to marketing.

Now, in addition to responding to media requests, Willard now fields various offers for sponsorships that she legally has to direct to student-athletes themselves. While she has to be careful, she’s enjoyed the opportunity to further promote student-athletes. “We’re able to provide our athletes access to assets like our photos and videos so they can put them on their social channels to promote themselves,” she said.

Whether it’s managing global superstars’ images or promoting important messages, sports information professionals have recently expanded their reach far beyond sports. Willard admits she’s come a long way from working in the sports information office in undergrad, where she reported statistics to local news stations. “A lot has changed,” she said, “but promoting athletes and representing the school remains at the forefront of the job.”