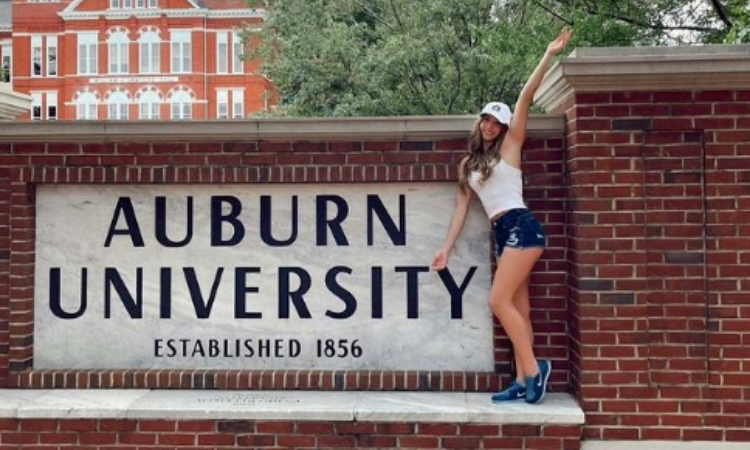 At the U.S. championships in the summer of 2019, Olivia Greaves, a junior training at MG Elite, had the competition of a lifetime, winning gold on the uneven bars and bronze in the all around. As her career was taking off, the next obvious step seemed to be the 2020 Olympics.

The next two years, however, didn’t turn out to be what Greaves expected. In the fall of 2019 her long-time coach Maggie Haney was suspended for five years for verbally and emotionally abusing gymnasts. And a few months later the COVID pandemic hit, leading to the postponement of the Tokyo Olympic Games.

During the time of the first lockdown, Greaves also started being plagued by injuries. In April she was temporarily training at her mother’s gym in New York when her knee started bothering her. She soon found out she tore her meniscus. “Originally I didn’t think it was an issue because it only prevented me from doing squat turns, but during quarantine I noticed it would randomly pop,” she said. “So I got it checked out, and that led me to immediate knee meniscus repair [surgery].”

Surgery seemed to be successful, and Greaves was soon back training again, this time in Texas alongside Simone Biles and Jordan Chiles. “I chose the World Champions Centre because I felt like Cécile and Laurent [Landi] had the most similar technique to what I was already used to, and I felt like it would be an easier transition and adjustment,” Greaves explained.

Moving across the country on her own took a bigger toll on her than she expected, though. “Living away from my family unplanned is probably one of the hardest things to do,” she said. “It was a venture I had never taken and had unexpected challenges that I had to deal with. But I was in a great place with a great team and super supportive coaches.”

In Biles and Chiles she found an especially important support system, which helped her push through the hardest moments. “I’m so grateful to have been able to train alongside Simone and Jordan,” she said. “They’re so supportive, and if I ever need help or am struggling in the gym, they’re there to help me out.”

By the time the postponed Olympic year came about in 2021, Greaves felt she had a shot at the Games, too. Recovery from her meniscus tear had gone well and training was going even better. Her old injury, however, was about to come back to haunt her.

In early April Greaves was squatting down to perform her wolf turns when her knee got stuck, preventing her from either straightening or bending it. A thorough medical examination revealed that her meniscus hadn’t repaired properly and that she needed a second surgery. “Right before the re-injury in April, I had gotten all my routines together and I was finally starting to feel like myself again, doing all my skills and finally upgrading—I was gaining my confidence back,” she said. “So having that injury so close to season really messed with me, and it was hard picking myself up again.”

Despite the disappointment, she managed to recover her positivity quickly, in part thanks to the new surgery itself, which went smoothly and allowed her to resume full training after only three weeks.

The hits kept coming, though, and another new injury was waiting for Greaves. One month later, her elbow suddenly started bothering her, leading to a bone fracture diagnosis. “Mentally it was even harder because that was the end of my season, and I couldn’t do anything about it,” she said. Greaves was so disappointed that she decided to leave Texas and fly home for a couple of weeks. When she came back, she discovered that her elbow injury had been misdiagnosed: It was a mere bone bruise rather than a fracture.

At that point, though, the U.S. championships, which selected the Olympic Trials competitors, were only two weeks away—too little time for Greaves to get competition ready. Her Olympic season was officially over. “I was so frustrated because I couldn’t get into routine shape in time, so I had to sit out this season,” she said. “All these injuries definitely tested me, but I think I’ve matured enough to realize sometimes it’s just not your time, and I just have to keep working hard until it is. That’s exactly what I plan on continuing to do.”

Greaves’ bad luck, however, was not over yet. Her positive mindset was challenged once more this summer, when the University of Florida pulled her verbal offer for a college scholarship for the 2023 season, leaving her to find a new team to call home. “I was completely devastated because I was committed there for three years and I thought it would be my home, so when I was told I had to find a new one, I didn’t want to,” she said.

“At the moment, it felt like I wasn’t wanted, but it was literally the next day when other colleges started reaching out and wanted to talk to me—I didn’t expect that,” she added. “This was very encouraging for me. I feel blessed that I ultimately found a home in Auburn.”

The person who first put her in touch with Auburn head coach Jeff Graba was Olympic champion and incoming Tiger Sunisa Lee. “The day I lost my scholarship to Florida, [Suni] texted me right away and said she gave my number to the Auburn coaches,” Greaves explained. “She had been a true friend first and was so supportive to me throughout this whole process. I’m so incredibly proud of her for winning the Olympics, and I can’t wait to be teammates in college.”

As Greaves visited Auburn, she knew from the beginning that she belonged there. “The coaches were different—they all want me to succeed not only with gymnastics but in life, too,” she said. “They were very welcoming on every level, and that made me feel like this is where I was meant to be.”

At Auburn, Greaves mostly looks forward to being a member of the gymnastics team and sharing her college experience with her teammates. “When I visited, I got to know the girls and I could tell that they are all such hard workers and all of them want to win. I really want to be a part of that,” she said. “They push each other and are there for each other and all want the same things in the end.”

Before starting the next chapter of her life in college, though, Greaves hasn’t closed the door on elite yet. She’s “very ready to get back out” again, and she hopes her first big comeback meet will be the world championships in Japan in October.

Whether or not her dream will come true, this time she knows she’ll be fine no matter the outcome. The bad experiences she had to endure have made her stronger, and with the support of her family and friends she’ll be able to face any future challenges. “In the past two years I have grown up a lot—I’m proud to say that,” Greaves said. “The experiences and injuries I’ve gone through were very hard for me …  [but] with the help of my coaches, family and teammates, I found my way and I’m happy again.”

READ THIS NEXT: After Almost Quitting Gymnastics, Konnor McClain Commits to LSU and 2024 Olympics