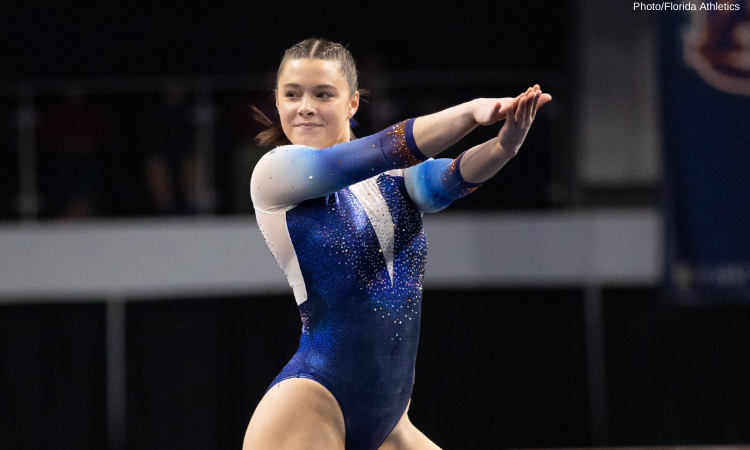 For Megan Skaggs, taking a fifth year has been on her mind ever since the NCAA announced that all winter sport athletes would be eligible for extra eligibility.

“I think I was the first of our current senior class to talk to [head coach] Jenny [Rowland] and express my interest,” Skaggs said. “I wasn’t ready to make any official decisions back in the fall semester, but I definitely had a lot of conversations with her and some conversations with the current team just to see their thoughts on it. But it was a personal decision at the same time.”

The 2021 season was Skaggs’ best one yet. She had been a strong contributor in her first three seasons, but she took her gymnastics to the next level as a senior, competing in the all around all but two meets and recording all around scores of 39.500 or better all but one time. Skaggs said that much of that success can be credited to her health.

“A lot of it had to do with just being healthier and stronger,” Skaggs said. “I was able to come off of last season and rest through quarantine and heal a lot of injuries that I had struggled with in the past.”

While the Gators had a strong year, staying in first place for most of the season, mistakes in the national final prevented them from winning the title.

“A big thing that could have helped us have a different end result is just believing in ourselves,” Skaggs said. “We did that all through regular season, and when you get to postseason, it’s easier to let doubt creep in. I still believe that we were the best team out there. We just didn’t show up and show who we were on that night.”

The Gators have a strong freshman class coming in, including College Gym News 5-star recruits Riley McCusker, Leanne Wong and Morgan Hurd. Skaggs is excited for the incoming freshmen because they’ll push the team to be even stronger.

“We have crazy talented gymnasts coming in, so we’re really excited,” Skaggs said. “We’re going to have a big team, which is going to be exciting, but new and also challenging for us. They’re going to come in and really push us all to be better. So that’s going to be great for us upperclassmen.”

Despite more competition for lineup spots, Rowland still sees Skaggs as someone who can contribute on all four events. She said that if Skaggs continues with her approach to training every day in the gym and keeps her body and mind healthy, she’ll be in the all around. However, her leadership skills might be even more of an important asset.

“She’s such a valuable part of this team,” Rowland said. “Not just gymnastically, but her presence amongst all the team members and her qualities that she brings as far as work ethic and leading by example.”

Even though the season has only been over for a few weeks, Skaggs already has goals in mind for 2022.

“First, I want to enjoy it, and second, I want to walk away with no regrets,” Skaggs said. “I’m really proud of how we all came together this year and overcame a lot of adversity. I really want to see us continue that and get even closer and even stronger and build off of what we learned this year and really pick up where we left off.”

In the end, the main reason why Skaggs decided to stay an extra year is for the love of the sport.

“The biggest [reason] is just enjoying the sport. If I [wasn’t] enjoying the sport so much, that might have changed my decision, but I really am not ready to let it go,” she said. “I love my teammates. I love the university. It just made sense for me to stick around, and I’m so happy that I have that opportunity.”

READ THIS NEXT: Perfect 10 a Long Time in the Making for Florida’s Leah Clapper 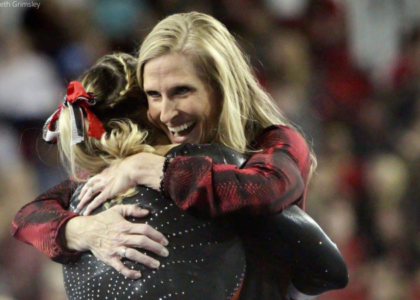