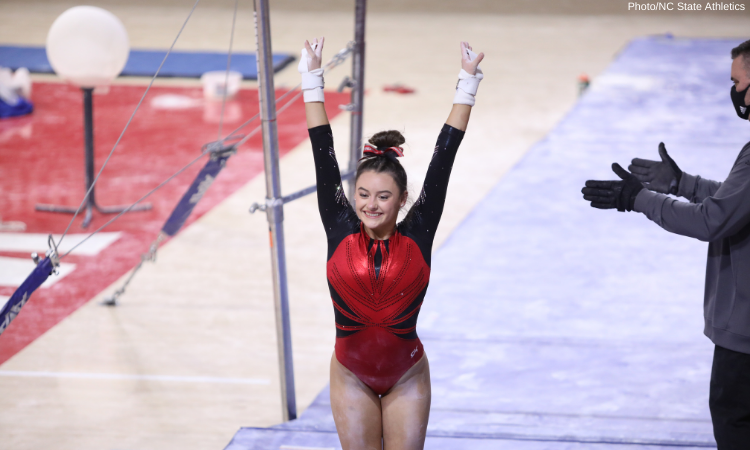 It’s the last rotation of day two of the regional championships, and sophomore Emily Shepard is set to go on floor for N.C. State. If she does what she is capable of, she could send the team to the regional final. A score of 9.750 or better will push the Wolfpack ahead of Illinois. With the pressure on, she hits her final double tuck to the cheers of her teammates. The score comes up, and it’s a 9.925—a personal best for Shepard and enough to send N.C. State to its third day in a row of competition—something that many did not think was possible a few days prior.

N.C. State had a strong regular season—becoming the EAGL regular season champions and putting up some of the best marks in school history. Going into the conference championship, it was the favorite to take the title. Despite putting up a respectable 196.050 in the first session, the Wolfpack was ultimately beat out by a record breaking performance from Temple in the second session.

Two days later, the team gathered together to watch the selection show to find out where it would be placed for regionals. With a No. 26 ranking, it assumed it would likely have a first round bye and jump directly to round two on Friday.

Instead, the news was not what they had hoped.

“I did a double take,” head coach Kim Landrus said. “It was not the news that we were expecting when we were watching the selection show.”

Despite the shock of finding out they were potentially facing three straight days of competition, the team quickly regrouped and came up with a game plan.

“We had to hit reset really quickly,” Landrus said. “We talked all year about controlling the controllables, and we could not control where we were placed or what round we were placed in. What we could control was how we handled it, how we responded and what we were going to do from that moment on to make sure that we represented N.C. State well.”

While N.C. State’s goal from the beginning had been to receive a first round bye at regionals, the team had been preparing for the possibility of having to compete in round one before the season even started.

“We would have three days of practice in a row and on that third day of practice, [the coaches] would say, ‘I know you’re tired today, but if we’re at the third day of regionals, that’s not going to matter,’” Shepard said. “It was always an idea, even from the beginning of season. If we have to do that, then we’re going to be prepared for it.”

At the same time, the coaches tried to strike a balance between training for the possibility of three days in a row and getting the team the proper rest needed to succeed.

“We worked to try to prepare them mentally and physically, but also to give their bodies rest so that they could go three days in a row,” assistant coach Phil Ogletree said.

When asked what motivated the team to be able to peak at the right time, Shepard said that the disappointment of not winning the EAGL championship motivated them to focus on the details, particularly stuck landings.

“[The loss] was a turning point for this team because we all went back and [worked on] the little details,” Shepard said. “It sucks to lose, especially when we knew we were capable of winning. I think it humbled us a little bit and made us hungry, and we trusted our training out there those three days.”

Shepard’s 9.925 on floor on day two not only clinched N.C. State’s spot in the final, but it also qualified her to nationals on that event—the Wolfpack’s first national qualifier since 2015. While Shepard knew there was a chance her score would be enough to qualify, she didn’t really think about it and instead focused on helping her team. When she did find out that she was advancing as an individual, she was excited.

“I could not believe it because that wasn’t a specific goal I had,” Shepard said. “I was more focused on regionals and conference championships.”

While she is sad that the rest of the team won’t be competing with her, she is not putting any pressure on herself for nationals and is just excited to be able to represent N.C. State one more time this season.

Because Shepard is only a sophomore, she will be able to bring to the team the experience of competing at nationals in a way that a graduating senior would not. That experience, as well as N.C. State’s Cinderella performance at regionals, will hopefully serve the team well in the future.

“After two rotations on day three, we realized we are in this,” Shepard said. “It’s not like we were just there to compete. We were hanging in, and we were proud of that because it showed us we are good. I don’t think we’re going to lose that next year; it’s going to help us grow.”

The Wolfpack’s performance on day three helped the team to a final ranking of No. 15—its highest since 1999. Shepard said that one of the reasons she came to N.C. State in the first place was because she saw the potential and wanted to help the team rise in the rankings. When she saw the team’s 2021 result, she was ecstatic.

“When I saw we ended ranked 15th, I almost cried because it’s one of those things that you work so hard for,” Shepard said. “I was really proud of myself and my team for that, because especially after losing conference, we went into the gym and put so much work in. It felt so good.”

Shepard is set to rotate with Utah in the second semifinal on Friday. The competition is set to begin at 6 p.m. ET, and her performance will come in the second rotation on floor.