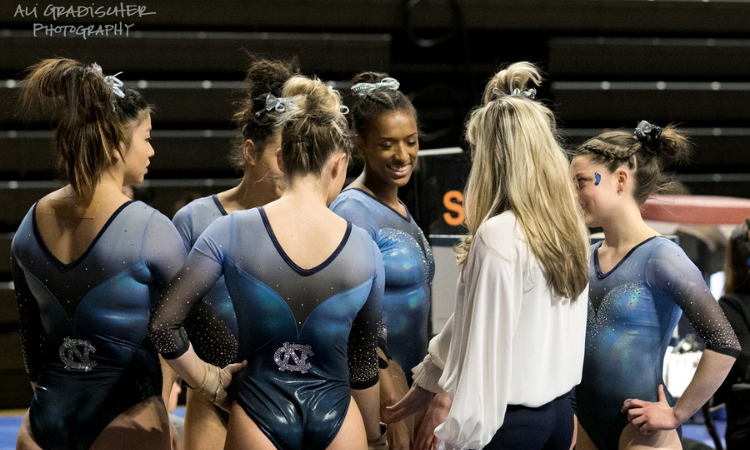 With New Hampshire having to pull out of the EAGL championship due to COVID-19 protocols, N.C. State becomes the absolute favorite to win the title after the Pack lost to the Wildcats in 2019. The Pack’s confidence will be high after scoring a huge 196.900 last week, though they will have to prove that they can compete as consistently on the road as they do at home. North Carolina impressed this season with very consistent performances on a weekly basis. The Tar Heels will not enter this meet as the favorites, but don’t count them out. George Washington had a very late start to its season and is unlikely to be in contention for the title, yet keep an eye on its standout gymnasts Kendall Whitman and Deja Chambliss on vault and floor.

Whitman (GW): here’s the Whitman, beautifully performed (front handspring onto the table, front pike half out). 9.775

Negrete (NCSU): front aerial to BHS, tiny balance check, switch leap to switch leap half to beat jump, second leap was short, straddle jump half on the side of the beam, double twist dismount, tiny hop. 9.850

Webb (NCSU): full turn, BHS + LOSO, switch leap to leap jump, front aerial, double twist dismount, hop back. Every skill was fought for but it was a hit routine. 9.850

Both teams have brought their A game today. NC State had a great beam rotation on its worst apparatus, North Carolina survived floor, its own worst event, while George Washington had a great start on vault, its top-ranked event. The highlight of the first rotation was GW’s Deja Chambliss’ flared Yurchenko full.

NC State started its second rotation with a fall but managed to hit the following five routine and leads the competition at the half-way point. North Carolina had a great vault rotation with four practically stuck vaults. George Washington did well on bars and sits behind the Tar Heels by only 0.025 points. The highlight of this second rotation was GW’s Anneliese Silverman’s bar routine, which by comparison was heavily underscored.

Shearer (UNC): blind half to Jaeger, bail to what probably was supposed to be a handstand (very low), double layout dismount, almost stuck. 9.725

Summey (UNC): blind half to straddled Jaeger, far from the bar but she catches it, bail to handstand, blind full a tad messy to double tuck dismount, it looked low and the coach touched her, it will be a deduction. 9.000

Hunter O. (NCSU): Yurchenko half, not the greatest amplitude but almost stuck landing. 9.775

Hunter G. (NCSU): Yurchenko half, she went for the stick but her knees buckled and one knee touched the ground. 9.475

Silverman (GW): full turn, side aerial, split half on the side of the beam, switch leap to wolf jump full, front aerial to BHS, tiny hesitation in between, side aerial to back full dismount, nearly stuck, very good routine! 9.825

Shek (GW): switch leap to switch leap half, short on the second one, full turn, BHS + LOSO, cat leap to side aerial, side aerial to full twist dismount, hop back, another solid rotation for GW! 9.825

Barring disasters in the final rotation, NC State will likely win this first session of the EAGL championship. The Pack are not having their best meet, but they are looking solid and superior to their opponents. North Carolina had a rough rotation on bars, ending its chances of victory. George Washington is probably the most impressive team here today. After a difficult season, the Colonials are having a great meet, it’s very nice to see. The highlight of the rotation was Carolina’s Elizabeth Culton’s bar routine, which scored a 9.925, the first 9.9+ of the meet.

NC State won the first session of the EAGL championship. It wasn’t a perfect meet for the Pack but they did enough to edge the rest of the field. George Washington impressed with a 195.800, less than three tenths behind the leader. It was its best score of the season. Carolina’s bar rotation but the Tar Heels out of contention, but they finished strong on beam with two 9.900s by Thompson and Culton. The highlight of the final rotation was GW’sKendall Whitman’s floor routine, which included three E tumbling passes and scored a 9.900.