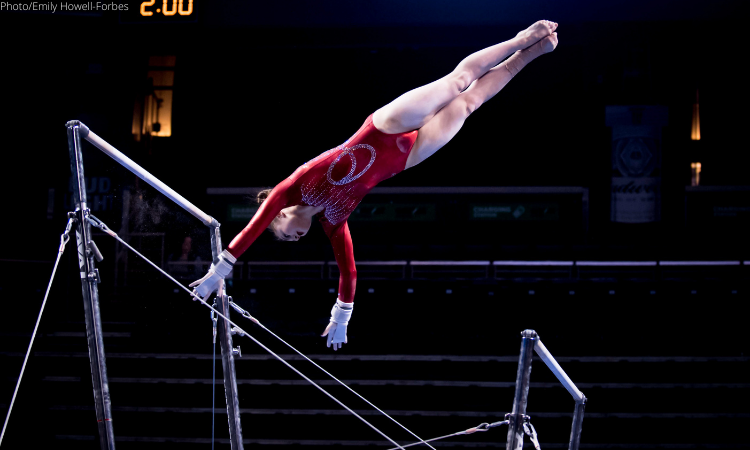 This is going to be a wild one. These teams have a pretty wide spread in NQS, but their highs range from 195.975 to 196.400—that’s just a 0.425 spread in score potential. It’s important to remember that any team from this session—and any individual—is capable of winning the title. It all depends what happens in session two tonight. That said, the night session teams are all a pace ahead of this group. It would take big mistakes from the top and a stellar meet from a team here for that kind of upset.

We’ll have one bye here, after vault.

Before we roll here’s a message from the conference:

Hey folks, my Wifi is acting up a bit today. Seems resolved now, but if it goes down again I’ll use data to keep watching and keep notes, so if I disappear hang with me for a few minutes and I’ll be back and update in a big batch.

Chesney in the background, hit her first two tumbling passes.

LeBlanc (UMD): Blind 1/1 to Gienger, foot form and a bit of a close catch. Bail hand short. Blidn 1/1 lat double tuck stuck, feet from all the way through.

Ferguson (RU): FTY, feet, chest down and a hop.

Verdeflor (PSU): Wolf turn 1/1, smooth. Front aerial small check bhs swingdown. She kept that connection despite being a touch off balance. Side aerial, great. Split to double stag, great. Side some tuck 1/1 stuck.

Edwards (tOSU): BIG double pike, hopped back some before the lunge. RO 3/2 front lay, excellent body position on the lay. Apparently the theme of this routine is “empowering women”. Switch side Popa, little overrotated on the switch but great splits. Double tuck, opened a bit early and had to step forward.

Huang (RU): FTY, little hop, some knees on the table.

Barber (UMD): Clean through her first half. Short last handstand. DLO, step back.

Cross (PSU): Bhs loso, knees on both and a fall. Split to sheep, could use more head release. Front toss to beat, good. RO 3/2, stuck but hips in the air.

Joyner (RU): FTY, beautiful in the air, step back.

Warga (tOSU): 5/2 to punch front stuck. Excellent. Leaps were solid. She’s a really excellent performer. Her finish on everything is great. FHS 2/1! Wow what a last pass. Some soft knees but otherwise great. How fun for her, she’s so happy.

Remember when I said this would be close? Mhmmm. Rutgers will be thrilled with that vault number. Maryland and Penn State were both on weak events, so they’ll mostly be glad this rotation is over. What an excellent surprise Warga was for Ohio State! She tallied a 9.600 which to me says a SV issue, because I didn’t see that many execution deductions.

Burgess (UMD): Front toss small check bhs, I think they’ll give her that connection. Split to straddle 1/4, good. She gets great height on those. Beat to side somi, arm swing to keep her balance. Gainer front 1/1, hop forward.

Lowe (tOSU): FTY, great body position, scooted back a touch. Feet were a bit far but she was able to bring her heels together.

Swartzentruber (tOSU): FTY, piked down and a hop back.

Allen (PSU): DLO, good. Love that cut in the music to Kendrick Lamar heyo. Switch side popa, some rotation issues but great splits. Front through double tuck, no deductions on that landing. Wow great set. 9.525, pretty sure she’s missing a value part in there. Just needs one more valued skill.

Weir (UMD): Bhs loso, small check and loose knees on the bhs. Beat to loso, chest down check. Switch to straddle 1/4, good. Cat to switch side, short on the split and some knee form. Bhs 3/2 step forward.

Jennings (tOSU): FTY, great in the air, bit step back.

Rouse (UMD): Standing loso to beat, excellent. She’s got a take no prisoners look about her here, so confident. Bhs loso, great. Split to straddle 1/4, touch shy on both 180s and chest a bit forward on the 1/4. RO 3/2 hop.

Johnston (PSU): A new event for her I believe. We have fun surprises in these anchor spots on floor. RO 3/2 front lay. Really had to arch the lay down. Switch ring 1/1 to tuck 1/1, wow! You can tell she hasn’t been doing this routine all year, little unsure on dance. Double pike feet, and chest down on the landing.

Barber (UMD): Long wait for her. Front aerial, stepped right out of it to avoid a bobble, great. Bhs loso, good. Front toss, little off to beat, really saved that well. Switch to split, steady. RO 2/1, stuck just leaned a little into the salute.

A rough start for Nebraska, and we didn’t get to see much of it. PSU made up some ground with a solid floor rotation. Maryland had a rough time as well, with those uncharacteristic mistakes from McClure after some other sub-par numbers.

Lorange (UNL): She’s so expressive on this event. She moves with great purpose down to the little details. Bhs loso, good. Switch to split, low back leg on both. Hitch to side aerial. Transverse split 1/2, better 180. RO 3/2 hop.

Bladon (PSU): FTY, some form on the table, little hop.

Davis (UNL): Switch to straddle 1/4, soft knees on both. Bhs loso, great landing. Cat to side aerial two feet, she was so happy with that landing. Side aerial tuck 1/1 stuck. Great!

Johnston (PSU): FTY, deep knees on the landing but didn’t move her feet. Little crooked on the table too.

Cross (PSU): FTY, some hips and a slide back.

Karolewski (RU): She can be so beautiful here. Clear hip hand to Ray, not a ton of turnover. Bail, short. DLO, step.

Roby (UNL): Front aerial, good. Pressure, after her bars set and fall from Curtis. Bhs loso, very steady. Split to double stag, medium check, chest with a turn to the side and chest down. Side aerial 1/1 stuck.

LeBlanc (UMD): Double pike, low chest. Switch 1/2 to wolf 3/2, lost some height and shape on the last 1/2 twist in the wolf but pulled out the rotation. FHS front 1/1 front lay, good landing but a bit low on both saltos.

Maryland will be happy to be back on track after a great floor rotation. It is excellent on vault, and will be looking to close out strong before ending on a bye to watch and wait. Penn State is the only team to hit a 49 so far with that vault rotation, and is sitting in a comfortable spot to head to the bye and then do battle with Ohio State in the last rotation.

Gilbert (UMD): Yhalf, not great distance but a good landing.

There is a man in the stands in a Nittany Lion suit, white and covered in the blue logo. Very impressive, sir.

Joyner (RU): Bhs loso, really floated the loso, steady landing. Switch to Split 1/2, one of the few switch 1/2s I like on beam. Actually hits 180. Side aerial 1/1 stuck. Excellent.

Huang (RU): Cat to side aerial front aerial, some soft knees in there. Beat to split 3/4. RO 2/1, low chest but holds her feet.

Lorange (UNL): She’s about to get the arena to herself here. She choreographed her routine herself! That’s fun, it’s a lovely routine, really elegant. Double pike, low chest and lunged forward. Front lay front 1/1, stepped forward and OOB. Phew lotta those for Nebraska, curse of the podium. Switch ring to switch 1/2, good. RO 3/2 front lay, arched the lay down some.

Rutgers! Those Joyner and Huang 9.900s to close the rotation catapulted the Scarlet Knights past Penn State. This last rotation will be fascinating. The Nittany Lions are on their best event. Ohio State can be stellar on beam, but beam is beam. Rutgers gets floor to close it out. This is fun. Everyone is chasing Maryland, whose day is done. That’s just a 48.500 for the Buckeyes, which should be easy. It’s a 48.850 for Rutgers, a taller ask, and 49.225 for Penn State. The Nittany Lions are capable of that on bars. Nebraska has been left behind a pace, but it’s anyone else’s game.

Higgins (UNL): FTY, soft knees and a small step back.

Miller (tOSU): Bhs loso, very steady. Cat to side aerial beat, no wobbles. Straddle to straddle 1/4. Gainer tuck 1/1 stuck, feet were a bit far apart but that was a great set for Miller.

Davis (UNL): FTY, foot scoot back, some form on the block.

Bonsall (PSU): Transitions were lovely. DLO, very deep knees, about 8 steps back in a squat, but stays on her feet.

Pritchard (tOSU): Cat to side aerial small check. Bhs loso, another little check. Switch to straddle 1/4, little offline in the air on the 1/4 RO 2/1, good.

Huang (RU): She gets the arena all to herself. FHS 2/1, soft knees but good landing. FHS rudi loso. Switch side wolf 1/1, front leg a bit low in the wolf. FHS rudi, great landing.

Meet back here at 6:30 p.m. ET for session two, live blogged by the one and only Katie Walsh! I’ll be back in action at 8 p.m. ET for the MRGC meet. As an aside, our photographer Emily Howell-Forbes was able to travel for the first time this season and is in Minnesota shooting both sessions, so be on the lookout for her photos next week!