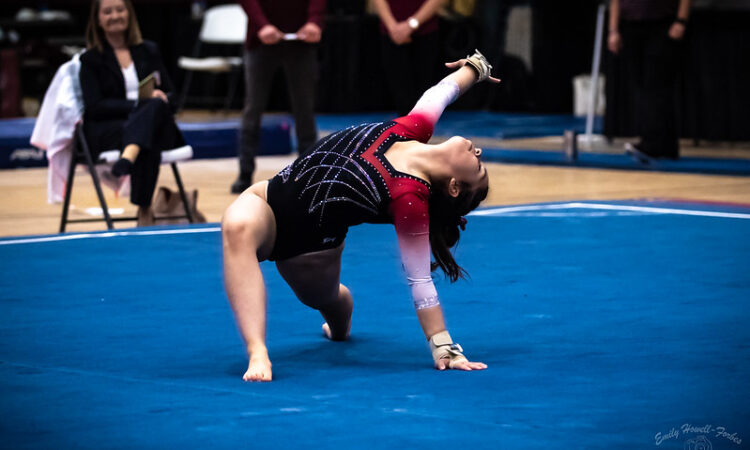 Welcome to perhaps the year’s most competitive conference championship. The four top teams in this meet are only six spots apart in the rankings, between Illinois State at No. 43 and SEMO at No. 48. Division III Centenary is the only team without a very realistic chance of winning this title: All four others have top scores in the 195 range. Illinois State has the highest peak score, but both Lindenwood and Texas Woman’s haven’t put together a complete meet yet. If the Redbirds don’t take advantage of their top seed and the home environment to pull out a win, the Lions likely have the next best chance at the title. Expect Illinois State to make up some ground on floor, which is a major strength. Lindenwood, meanwhile, is nationally ranked on vault.

This will be a five-rotation meet with a bye following vault. At the time of writing we don’t know the full rotation order, but we know that SEMO will begin on bye and we can reasonably assume that host and No. 1 seed Illinois State will start on vault and get Olympic order.

Also, note that the meet will take place in Illinois State’s Redbird Arena, which typically hosts basketball. Gymnastics typically competes in a smaller arena, so it’s exciting to have access to a bigger facility for the conference championship.

Huff (CC): Rudi back tuck, commentator described that as a “little bit of a low chest” but I’m pretty sure her head made impact with the floor. One and a half front lay. 8.9

Quigg (ISU): Kickover front BHS, little bit of finesse and a big smile, split tuck full beat. Side somi with a fall. Shaky as she continues, round off 1.5 twist. 9.225

Griffith (TWU): Great FTY with a small hop back.

Woodring (TWU): FTY, piked down a touch but well controlled, bounce on her toes.

Daniels (LU): Imperfect first handstand, Tkachev, bail to toe shoot solid. Cast to handstands not quite making it, blind full double back with a hop.

Stiff (CC): Fall back on her double pike. Tour jete full. One and a half and runs out of it.

Mitchell (LU): Blind to Jaeger, clear hip to bail, cut away before her dismount.

Labat (ISU): Front aerial, BHS LOSO lovely. Full turn, switch switch half with a bend check, one and a half twist stuck. Great!

Harris (CC): Slightly overrotated double back. Nice presence, one and a half front lay done well. 9.625

No one’s taken themselves out of contention with this performance, but Texas Woman’s should be particularly proud of this great start. Heading into the bye in a very strong position. For Lindenwood the make or break event is coming up now, while Illinois State can hit the gas in this rotation too.

Moffitt (SEMO): Good bial, missed a handstand, blind full open double back with a hop back.

Fox (ISU): Front lay to Rudi, a touch whippy but very well controlled on the landing. Great panache on the double pike,

Maxwell (SEMO): Fall on the release, missed a handstand, low bail with a substantial leg break. Blind full double back with a big step back.

Labat (ISU): Front double full, big step. Split to tour jete full actually fully rotated, get it. One and a half front lay great. Lovely Rudi. Her technique is fantastic.

Wojcik (LU): Switch to split a bit short. Missed some stuff as we cut around the arena, dismount stuck.

Fischer (SEMO): Joined for a double lay, close to stuck, she looks thrilled.

Bates (SEMO): Watched a blind full double back with three steps back.

Mitchell (LU): BHS LOSO lovely, split split 3/4. Full turn. Aleah Leman and Jordan Boogerd are having a moment in the background there. Switch side, gainer full off the time really good. 9.875

Miller (SEMO): Maybe we’ll actually see a full bars routine here. Piked Tkachev, swing forward and comes back with an Ezhova. One of my favorite routines. Double lay pretty with a hop back. 9.825

Quigg (ISU): Overrotated double pike but makes it work. One and a half front lay. She’s got a very fun presence, even her hands in lunges are super high-energy. Lindenwood hit the gas here on an event that’s been a weakness.

Baars (LU): Fall on her series but it’s fine with five strong routines ahead of her.

Pretty much my thoughts on that. Lindenwood has its A game. Pressure now on SEMO and TWU to back up their great first rotations and fight with Lindenwood.

Fischer (SEMO): Side aerial to split, fall on her double turn. Cat leap side aerial back full stuck. 9.275

Bandy (ISU): Low on her FTY, feet pretty close to the table, step.

Lopez (LU): Great double back. She’s got Soloski’s 2020 music and the energy to pull it off. Front full front pike.

Bonzagni (TWU): Full turn, feet apart, goes over the bar and falls. Same fall on the same blind full again. She’s smiling as she goes down, which is something.

Roberts (LU): Solid double back to start, double pike, we cut away and missed the end.

Maxwell (SEMO): Missed a split quite badly early on, switch side, one and a half twist with a big hop.

Neely (ISU): Yurchenko Arabian with soft knees and an ambiguous landing, couple steps back. 9.7 will likely be the drop score here for a very good rotation.

Labat (ISU): Yurchenko one and a half, baby leg separation on the table and a big hop forward.

Johnson (TWU): Clear hip, arch but gets it back, Tkachev with foot form. Bail with a form break, half turn with a fall. Dang that fall will count for TWU 🙁 This isn’t looking like a meet with the margin for mistakes like that. Got her double back.

Miller (SEMO): Split split 3/4, pretty, I think that was a side aerial to split, one and a half with leg form but stuck.

Goyco (TWU): GREAT Gienger to overshoot with slight break, blind full double back with a hop. 9.875

Baze (LU): Double pike, slightly overcooked. Big amplitude on her double back, ambiguous rotation on Popas, one and a half front lay great. 9.85

Griffith (TWU): Bail good, FTDB with a hop back.

Kaziska (SEMO): Front aerial to split lovely, full turn, BHS LOSO with a touch of arm finesse. Switch to split 1/4, wobbly but still a pretty fast connection, one and a half stuck dead. 9.65, nope, they took the leap connection.

It’s all Lindenwood today with a huge 49.150 on floor. The modest-looking gap between the Lions and the Redbirds is exacerbated by the fact that Lindenwood’s best event by far is coming up in the fourth rotation, while Illinois State is under pressure finishing on bars. With two counted falls on bars Texas Woman’s has taken itself out of contention, while SEMO was fine but not spectacular on beam.

The ISU commentators think that TWU AC Stephen Hood’s energy level is awesome and they are absolutely correct.

Woodring (TWU): BHS LOSO very secure, switch switch split flat-footed but with good splits. Full turn, kickover front with a check, one and a half twist.

Sander (SEMO): Double pike, awkward. Hoppy combo pass, switch side and turns back the other way with her Popa which I love.

Baze (LU): FTY, leg separation on the table but big with a small hop back.

Bonzagni (TWU): Cat leap switch side, BHS LOSO, falls. Big check on a switch, back tuck to split, check. Side aerial, tuck one and a half with a cross step.

Griswold (LU): FTY, foot flicker, the same small hop the others have done.

Mitchell (LU): The first of the two Arabians. The rotation lives and dies by these. Mitchell’s is absolutely gorgeous as usual, fake stuck up on her toes and steps to salute. 9.85

Kunzman (TWU): Fell on her triple series. Bend check on a side aerial. Split issues especially on her switch leap, one and a half twist with a hop back.

Solorzano-Caruso (SEM): Double pike huge and overrotated, front full front lay. Great Rudi. Not the most precise landings she can summon but tons of panache. 9.775

Baumgartner (CC): Just saw a double back but she landed crying. Not sure what’s up but it looks like Jenny Jackson is taking care of her.

Kaziska (SEMO): Lovely front double full, switch side Popa rotated perfectly and stuck. No quicker way to my heart than actually sticking a leap pass. Little hop back on her Rudi.

This is very likely Lindenwood’s title. Illinois State can take it away, but it would take a 49.200 to tie, which would be the second-best bars score in program history. Falls took Texas Woman’s out of this one and SEMO just didn’t control landings well enough on floor to stay in the fight.

DeCroo (ISU): Stuck for a second on her bail but makes it, blind full double back. 9.725

Maxwell (SEMO): Yurchenko tuck full with a hop to the side.

Test (SEMO): Pretty FTY with a big hop back.

Ponder (CC): Tic toc, full turn, BHS LOSO with leg form but landed well. Beat to sheep, that was not a sheep but here we go. Beat to LOSO deep. Switch tuck 3/4, gainer pike low with a big step.

Fox (ISU): Full turn to bail to toe shoot, great, goes straight for the double lay. No Deltchev today so she won’t start from a 10.

Johnson (TWU): Double pike, one and a half front full. Rudi overrotated and a big scoot back.

Solorzano-Caruso (SEMO): Great body position on her FTY with a little hop.

Doctor (SEMO): Double lay, closes her hips in the second salto but stuck. This stream really loves to show us nothing but dismounts on bars.

Woodring (TWU): Overrotates her double pike, right on the line, whoa she lost her balance and turned and put her hand down out of bounds. Frustrating on a landing that ultimately wasn’t that bad. Front full front lay stuck, gripped with the toes there. Lifted the front foot on her double back.

Labat (ISU): Ray to overshoot, FTDB with a hop back. Great.

Knaps (CC): BHS LOSO, leg form and falls. Switch to tuck 3/4. Second fall, I didn’t see what skill because I was distracted by being rickrolled, stuck the gainer lay but limping off.

This meet was Lindenwood’s from the second rotation. Illinois State should be proud of another huge total, but the Redbirds needed a great floor rotation to take advantage of Lindenwood’s weak event, and when the two finished that rotation tied, it was clear what would happen given the relative strengths of the remaining two events. Centenary and SEMO both produced meet totals comparable with their good meets from earlier in the season, while Texas Woman’s will hope it got all the falls out of the way before USAGs.