[UPDATED 2/11/21 11:51 ET] Florida photographer Erin Long stated that Sydney Johnson-Scarpf agitated her hip flexor and will be likely out this weekend and possibly vs. Kentucky.

[UPDATED 2/11/21 10:14 ET] Iowa State has paused athletic activities and will not compete at Metroplex.

Michigan comes out of its mandatory athletics pause this week, and will pick things back up hosting Nebraska on Monday, Feb. 15.

It’s notable that your definition of a “fantasy week” may make your byes and doubles shift the BYU and UCLA meet on Wednesday, Feb. 10. BYU competes again on Friday, Feb. 12 and UCLA on Sunday, Feb. 14. The MAC doubles are all standard Friday/Sunday affairs.

Vault: Nika Takagi might bring out a 10.0 vault for LIU. We saw Allison Zuhlke debut a brand new 10.0 start (FHS onto the board, Tsuk tucked full) for Towson this week. She scored a 9.675, but there is obvious room for improvement there. Payton Bellows was missing from this lineup last week; we don’t know why, but proceed with caution. We’d be cautious with Talia Folino in lineups for now; it appears that she had a bit of a journey getting to the States and arrived on campus late, so it’s hard to know her gymnastics status at the moment.

Bars: With LIU kicking off, that means it’s Mara Titarsolej time! Sarah Clark has two back-to-back 9.9s here for Arizona State. Get her in your lineup! Rachel Borden, former beam specialist, has been stronger on bars this year, with a slew of 9.825s. Abbey Miner Alder stepped back into bars in Haley Pitou’s absence. We have to imagine Pitou will be quarantining a second week, and Miner Alder will back in this lineup.

Beam: We’ve seen Anna Kaziska in a knee brace, which might explain her beam-only meets. We’d keep her here only if you don’t have space for potential zeroes on the other three. Alisson Lapp is your LIU beamer to reinvigorate your lineup. Looking for a really reliable 9.8ish beamer? Your answer is Air Force’s Briona Carswell. Belle Huang and Hannah Joyner both went 9.9 on beam this week for Rutgers; beam scores were generous, but both are exquisite on the event.

Floor: Cairo Leonard-Baker has been a bit of a lineup roulette situation this year. We’d imagine she’ll remain a vault, bars and floor worker for the duration, but floor is probably the place she’ll be pulled if ankle troubles rear their head. Hannah Demers was pulled from beam and floor versus Bowling Green, and we’re not sure why. If you can’t afford zeros, we’d keep her on bars and be cautious on leg events. Of course, chances are she was just rested! Kendra Combs has been rolling on floor so far this year and hit a 9.9 last week, as did Ball State’s Claudia Goyco.

Starts, Sits and Pickups for Week 6

Vault: Kiya Johnson vaulted her Yurchenko double last week and gave herself a good ankle crunch. Never what you want to see on a sore Achilles! Still, the Florida meet is the most important on LSU’s docket until the postseason. If she’s feeling at all able, we imagine she’ll vault and then rest her ankles until the conference meet. Consider her a game-time decision everywhere but bars, where she’s a lock. We’re not sure where Sarah Edwards was; perhaps resting. If she’s able, she’s certainly going to be back on vault and floor.

Bars: Aria Brusch made her return for Auburn last week for a 9.900. She’s coming back from a shoulder issue, so we’d imagine she’ll be limited for a bit longer, especially since Auburn’s lineups looked secure. Several weeks ago, KJ Kindler targeted a Metroplex return for Olivia Trautman, mentioning bars to start.

Beam: Cassie Stevens is back and put in a great all around effort against LSU. She seems like she’ll stay on all four. Let’s talk about Cal lineups. Namely: “??”. Gabby Perea did an exhibition beam set, so if you’ve been holding onto her and hoping, this might be your week. Vanessa Deniz debuted on beam for the Sooners for a 9.900; she might just be the answer to their “who is the sixth routine?” question there.

Floor: Elena Arenas got one of LSU’s floating floor spots and put in a solid 9.875. It’s one of the better numbers we’ve seen from the folks in and out of the top six, so we could see her keeping that spot. What about Florida, though? Alyssa Baumann missed two floor outings in a row, and Sydney Johnson-Scharpf wasn’t in the lineup versus Missouri. Given the previous rest week, and the importance of the LSU matchup, we’d imagine both will be back; Halley Taylor is likely out.

Keep in mind that we don’t know the specifics around the seven Denver absences—significantly for fantasy, Rylie Mundell, Amoree Lockhart, Jessica Hutchinson, Rose Casali and Mia Sundstrom—and it’s possible one or more of them will miss another week. However, do note that Sundstrom was seen at this past weekend’s meet while the others were missing completely—as far as we could tell from the stream.

Article by Emily Minehart with additional reporting from Rebecca Scally 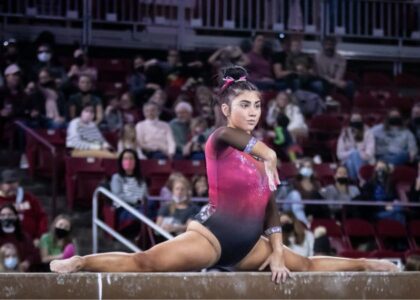