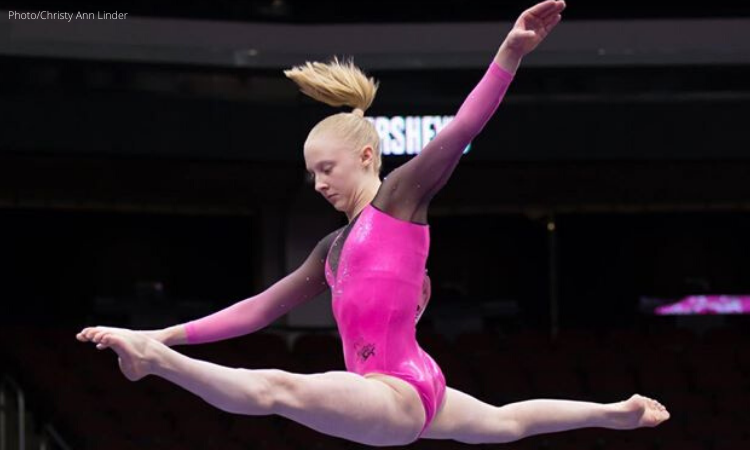 The most anticipated series is back! We looked at the data for each incoming J.O. freshman on each event to see which gymnasts are at the top of their class across the apparatuses and in the all around. This week we’re looking at the top 10 beam routines for 2021.

Magnelli competes a solid set, which includes a front aerial, a triple series (BHS + LOSO + LOSO) and a 1.5 twist dismount. Kentucky graduated two of its beam workers this year—Mollie Korth and Hailey Poland—so Magnelli will be expected to fill one of the two vacant spots in the lineup.

Perea performs a difficult routine, reminiscent of her elite days. Her skills include a standing full, a BHS +two-foot layout, a side somi, a switch leap to switch half and a double twist dismount. She will want to keep her nerves at bay and hit each skill without major breaks. Co-head coaches Justin Howell and Liz Crandall-Howell will likely decide to have her compete her standing full only sporadically in order to increase consistency, but this routine will score well.

Lopez performs a dynamic set, which includes a front toss, a BHS + LOSO series and a front full dismount. Given that Boise State has graduated two of its best senior gymnasts on beam, Isabella Amado and Courtney McGregor, Lopez will be a welcome addition to the lineup.

Soza’s form is excellent on this event. She competes a complex routine: front tuck, front aerial to BHS series, full turn with the leg held horizontal, illusion turn, BHS + LOSO + full twist dismount. Utah’s beam rotation will be the most competitive in the country to crack next year, but Soza is capable of doing it.

The 2019 J.O. national champion (junior F) is another gymnast with impeccable form on beam. She performs a triple series (BHS + LOSO + LOSO), a front aerial and a double tuck dismount. With a career high of 9.925, she seems Rachel Gowey’s perfect replacement. Head coach Jenny Rowland may want to replace her dismount with an easier element to avoid deductions.

The 2018 J.O. national silver medalist (senior A) on beam is a consistent beam worker. She performs a BHS + LOSO series, a full turn with the leg held horizontal, a front toss and a side aerial to 1.5 twist dismount. Some connections are perhaps a bit slow, but Killough-Wilhelm will be an asset for Washington, especially given that its three best beam workers—Evanni Roberson, Maya Washington and Madison Copiak—have graduated.

The 2018 J.O. national champion (senior B) on beam has a difficult routine: side aerial to LOSO series, side somi and a 2.5 twist dismount. Denver may want to polish her form on some of her skills, but she presents herself as a solid replacement for Maddie Karr.

A multiple J.O. medalist on beam, Li performs a solid set that includes a front aerial, a BHS + LOSO series, a sheep jump and a double twist dismount. She is known for her consistency on this event, which is exactly what California needs.

Davis brings her elite experience to Norman, where, given Maggie Nichols’ graduation, she will be needed. She has beautiful lines and competes a front aerial, an Onodi, a BHS + LOSO and a double twist dismount. She could anchor one of the top beam lineups in the country, even as a freshman.

Bauman has impeccable form on beam. She performs a side somi with straight legs, a BHS + LOSO series and a double tuck dismount. She will compete with Natalie Wojcik for the Wolverines’ anchor spot.