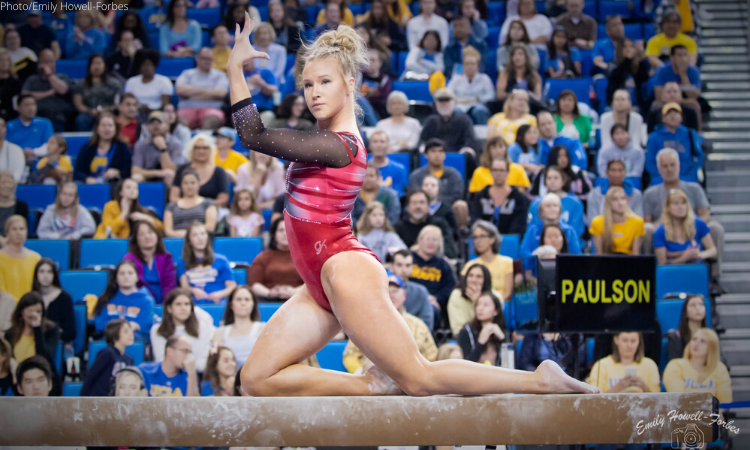 We read a lot of roster bios. A LOT of them. It’s part of the gig. You’d be surprised how many goofy nuggets are out there in the wild. We pulled together some of our favorites for your amusement. Some of it is funny, some fascinating and some is downright impressive.

“She was also a Junior Olympic National Champion who earned the S.A.A.U.’s Outstanding Gymnast award. By virtue of her accomplishments Breaux qualified as one of the top-15 athletes in the country to compete at the World Games Trials and was set to compete at the 1972 Olympic Trials before a career-ending knee injury forced her to retire.”

“Not only a gifted gymnast and coach, Solorio has found much success performing in local theater, musicals, commercials and in modeling. In addition, Solorio toured nationally with The Muppet Show on Tour, and Show Your Spirit.”

“Prior to her time at Bridgeport, Nassi was a member of the Spanish National Team that finished fifth at both the 2004 Olympics in Athens and the 2003 World Championships in Anaheim.”

“During her time at UNC, Coach Jernigan helped raise the awareness of Tar Heels gymnastics.  Within a few months the UNC gymnastics Facebook page became one of the top four most popular collegiate gymnastics fan pages in the nation behind only UCLA, Alabama and Utah.  As a result, UNC’s home meet attendance doubled in 2011 (No. 16) and doubled again in 2012 (No. 11).”

“Farden began his coaching career at age 18 when he opened the Spectrum Training Center in his home state of Minnesota immediately upon graduating from high school.”

“Dockendorf took up pole vaulting as a sophomore, earning All-America honors with her sixth-place finish at the 2005 NCAA Championships. She placed 11th at the 2006 NCAA Track & Field Championships.”

“His first career as a professional opera singer and classical musician proved highly successful as he traveled the globe, singing in front of crowds as large as 80,000 people in the most prestigious halls such as the Kennedy Center, La Scala and Lincoln Center and cities such as Bologna, Chicago, San Francisco, Seattle and Tel Aviv.”

“During her time at UK, Fain was named Most Valuable Gymnast, helped guide the team to three NCAA Regional berths and was an individual qualifier in the all-around competition. She was UK’s first nationally ranked gymnast (16th).”

“In 2001, Garrison coached Rachel Tidd to the World Championships in Ghent, Belgium, where she captured a team bronze medal and finished eighth on beam. A year prior, Garrison coached Tidd to a 10th-place showing in the 2000 U.S. Olympic Trials.”

“A native of Dublin, Ireland, Galvin moved to Arlington, Va., with his family when he was 10 years old.”

“Bauman was initially involved in aerial ski jumping for nine years, creating an interest in gymnastics.”

“Used to play baseball on an all-boys team because she was too competitive to play on the softball team.”

“Appeared as a specialist in the Kellogg’s Tour of Champions in 2016.”

“Has also lived in Argentina and Brazil.”

“Was born with Klippel-Trenaunay Syndrome, a rare congenital vascular disorder that affects the development of blood vessels, skin, muscles and bones…Had corrective surgery at age 13 after her right leg grew more rapidly than her left as a result of her syndrome, but continued to train and compete in gymnastics.”

“Enjoys horseback riding and competing with horses and is majoring in animal science.”

“If she could play another sport, she would choose football because she wants to tackle people.”

“Will remain at Oregon State to attend graduate school in pharmacy beginning in the fall of 2020.”

“Born in Shanghai and moved to Canada at age 6.”

“First-ever Arkansas gymnast to be from Missouri.”

All three have twin siblings.

“Father was a 1996 Olympic silver medalist in Greco-Roman wrestling.”

Parents are named Matt and Lynette.

Only a few teams list the other schools their athletes were recruited by, but more should do it because it’s fascinating. It’s unclear from the descriptions whether these are schools from which each athlete had an offer or whether it just refers to less formal correspondence.

Side note: There are a SHOCKING number of bios that still laud folks for having worked at SCATS or under the Karolyis. Maybe don’t, yeah? Also, some of you still don’t know how to spell Liukin and it shows.