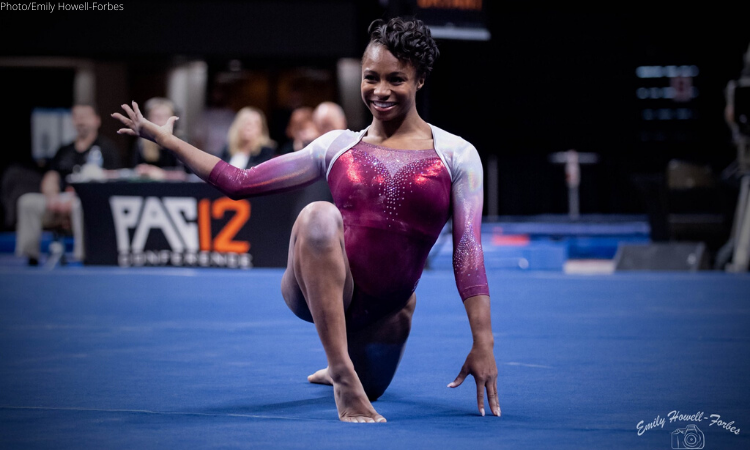 There wasn’t a ton of movement on this list, which is becoming quite solidified. A few teams— Utah State and Penn State—dropped into regional play-in status, and their individual gymnasts joined the list. Nyah Smith saw a surge after dropping a 38.575, and Belle Huang jumped into the list of qualifiers who would advance if season ended today by dropping a 38.550.

MAC foes Hannah DeMers and Rachel Decavitch each have a big upside, with two quite low scores to drop; if both hit in their final two meets, they can absolutely qualify. Another to keep an eye on is Deja Chambliss, who does not yet have enough scores for an NQS—with two more meets to get one score, she will almost certainly join the qualifying ranks with a hit meet.

Kaitlyn Hall dropped a 9.800 to rocket up the list into third place. Alecia Petrikis also made a significant move after dropping a 9.775; she has a second identical score and two remaining meets to drop it, meaning she can climb even higher. Marissa Nychyk dropped a 9.775 of her own, climbing 0.200 in NQS.

Meanwhile, Abbie Pierson ascended from losing a tie break to comfortably in the qualification mix, and Daisy Woodring joined the 9.8200 club, where she would win the tie break for the final spot if season ended today. Woodring still has a 9.750 to drop.

Samantha Marion and Deven Herbine debut on the list in qualifying position.

The biggest story on this list is Jazmyn Estrella, who managed to drop one of her nightmare scores to debut in a position that nearly guarantees her qualification to postseason. Emma Milne’s season high of 9.925 on bars shot her into qualifying position, too, but for now she would lose a tiebreak with Tatum Bruden and Angelica Labat. Boise State’s Emily Muhlenhaupt continues to dominate on bars and isn’t particularly threatened by having no more road score opportunities. The other Boise State and Ohio State gymnasts on this list, too, have fairly comparable home and road scores and shouldn’t worry about the impact of their schedules.

Anna Salamone, a senior at Air Force who has qualified to regionals on bars all three years of her career so far, is currently on the outside looking in and needs a strong finish to make it a full set of four. Watch Mei Li Costa from Brown, who has a low score still to drop and a double-meet weekend coming up.

Taylor Chan dropped out of all around qualification standing and immediately into the race for a floor regional spot, and with five 9.900-plus scores this season she’s a force. Division II Maya Reimers continues to top the list, and fellows Darian Burns from Seattle Pacific and Isabel Goyco from Texas Woman’s join her, with Bria Northrop barely on the outside. Autumn DeHarde’s massive 9.950 season high this past week rocketed her up the standings. Michaela Burton also joins the list this week after dropping an early season 9.650 road score.

Also just on the outside are a crew with exactly one 9.900-plus score this year, including Jade Brown, Cydney Crasa and Emili Dobronics. If they can score another one in the final weeks, they stand to gain.

Stanford (bye) and Arizona (at Boise State) are in serious danger of falling out of the top 28, which could cause a big shake up in the individual qualifiers race due to the amount of strong individuals both teams have. Stanford only has one more meet, the Pac-12 championship, to hang onto its position while Arizona has two, both away, but losing arguably its best gymnast in senior Maddi Leydin will hurt immensely.

Last year we saw what having Arizona and Iowa in the play-in teams did to individual qualifiers. We’re sure a lot of teams with strong gymnasts outside the top 36 even are hoping those teams make a push for higher placement in these last couple remaining meets.

Note: Maddi Leydin of Arizona is ranked in some events, but was not included since she recently suffered a season-ending injury.