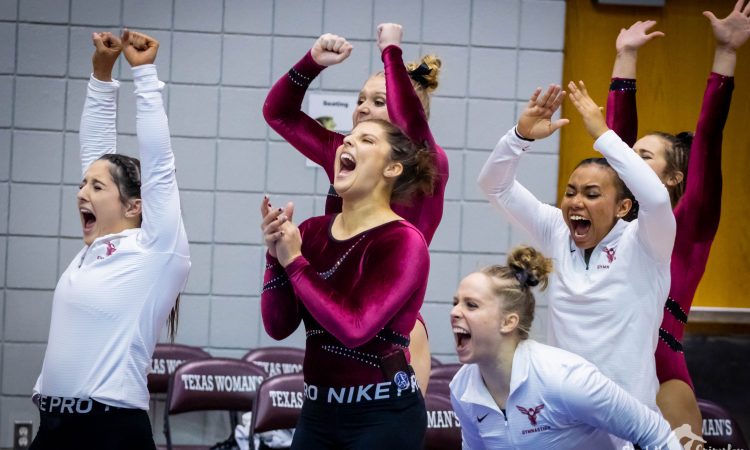 We’ve entered the portion of the USAG season where teams have mostly survived the opening bumps and can begin to build on their scores week-to-week. Seven of the 13 teams we’ll discuss here set season highs this weekend, and a new outright highest score of the USAG season was set by Bridgeport. The landmark performances of the week came from the MIC, with Texas Woman’s beating its previous season high by just short of three points and Centenary exceeding its own by almost SEVEN points.

Davis had knee surgery over the offseason, so it would be reasonable to expect her to take time to work into the floor lineup and find her full form this year. But—nah.

Leon is a very late addition for the Owls, arriving in New Haven for her freshman year only last week. But the Puerto Rican elite’s talent and gymnastics credentials overrode any beginner nerves when she delivered this beauty of a debut beam routine.

Return of the Week

Milliet is a fan favorite due to her style and polish on beam, but she’s been missing from training updates and lineups for a while. She competed in the exhibition spot at Texas Woman’s on Saturday and will very likely be in the main lineup next week.

Emotions of the Week

Southern Connecticut State held a meet in honor of teammate Melanie Coleman, who passed away in the fall. The team left a place for her in its march-out lineup.

The Big Storyline: This meet was a revelation for Texas Woman’s, which finally put together a clean rotation on bars as well as excelling on floor to crush its season high and upset Lindenwood. Paige Stuyniski registered a 9.800 in her 2020 bars debut, substituting for one of the Pioneers’ less consistent routines. Bria Northrop set a season high in the all around, coming in just short of a 39.0. Lindenwood couldn’t recover from an opening rotation bars meltdown, but a messy beam rotation that included an injury to Breanna Franklin didn’t help matters.

Implications: All of Lindenwood’s rankings remain basically untouched—while this loss didn’t feel great with so many missed routines, the final score actually wasn’t too low. Texas Woman’s jumped up a few spots nationally and passed SEMO to lie third in the MIC.

The Big Storyline: It’s full steam ahead for West Chester, putting up a score only a few tenths below 2019’s final NQS. There is work to be done as more teams put up 193s, but West Chester still looks very competitive with the best in the division.

Implications: In the national rankings, the Golden Rams remain just barely behind Lindenwood. A ranking in the high 40s is incredibly impressive compared to last year’s final mark of No. 62. West Chester is also first in the ECAC-II conference and ranks ahead of every Division I ECAC team as well.

The Big Storyline: It was an all right day for the Quakers, though a season low is never anything to be excited about. Floor has deteriorated since the beginning of the season, and bars was a challenge versus Rutgers as well. Luckily, key beamer Natalie Yang recovered from last week’s fall and tied her career high of 9.875.

Implications: Penn is tied with Temple for first place in ECAC-I.

Controversies: All arounder Sydney Kraez was pulled from the floor lineup at the last second for unknown reasons after putting up strong scores on her first three events.

The Big Storyline: Bridgeport had another sparkling day on the road at Brown, beating its own season high and top USAG score of the year. While bars had issues, the other three events improved and delivered scores over 48.500. While numerous USAG teams have the potential to score 195 or higher this year, Bridgeport’s path to that top level is by far the clearest. Even more excitingly, the Purple Knights didn’t count a fall on beam after a rocky start to the season on their most challenging event. Brown also set a season high with the help of an amazing 48.600 bars rotation and a 9.900 from Mei Li Costa. The Bears seem to have put last year’s inconsistency behind them and look very competitive with the rest of the Ivy League.

Implications: Bridgeport snuck up a few spots in the national rankings, still hindered by the Week 1 meltdown.

The Big Storyline: Yale produced an emphatic season high at home on Saturday, with a particularly successful beam rotation. Lindsay Chia debuted a new one and a half twist dismount on bars. The Bulldogs are still without sophomores Kendal Toy and Seina Cho, both of whom are injured, and freshman Raegan Walker was missing this week.

Implications: Yale is succeeding and staying competitive in the rankings, but it’s hard to see from where the growth that will be necessary to keep pace with its Division II rivals through the season will come.

Controversies: The male commentator for this meet was infuriatingly but consistently certain that each team could only put up five exhibition routines and that the sixth was an exhibition.

The Big Storyline: SEMO registered a season high in the final meet of its opening road stretch. Anna Kaziska and Dahlia Solorzano-Caruso continue to lead the team, each scoring above 39.000 in the all around. The Redhawks will finally open their home season next Friday.

Implications: SEMO is still looking like a strong contender to qualify to USAG nationals as a team, which would be remarkable.

The Big Storyline: Air Force opened its home season with a very similar result to last week, though its star upperclassmen continue to improve. Anna Salamone and Tyler Davis both scoring 9.900+ on their key events is a hint that there’s more to come from this team. Interestingly, in all three meets so far, the ordering of events from strongest to weakest has been the same—the team is best on floor with vault following close behind, while beam is consistently the lowest.

Implications: Air Force crept up one spot in the MPSF after a bad week from Alaska saw the Seawolves tumble.

The Big Storyline: A great day on bars and floor allowed Seattle Pacific to register a season high. Freshman Alixandra Pierce continues to be a landmark addition for the Falcons, contributing two scores over 9.700.

Implications: At the end of last season, Seattle Pacific was last in Division II, but the Falcons are staying ahead of Southern Connecticut this year.

The Big Storyline: This was an unmitigated disaster for Cornell, which could easily have been beaten had the other teams not had issues of their own. The Big Red now has two scores under 190 after not missing the 190 mark a single time between the middle of 2015 and this month. Southern Connecticut slid back as a result of a tough showing on bars but had bright spots, including an all around title for Hannah Stahlbrodt and a successful debut for freshman Bianca Leon.

Implications: Cornell’s average is over a point behind Seattle Pacific, so don’t imagine that it will be easy for the Big Red to fight back into qualifying position for USAG nationals.

Controversies: At the beginning of the meet, Cornell tweeted that there would be an equipment-related delay. We discovered later that the bars had collapsed during the warm up period.

The Big Storyline: Centenary picked up its first win of the season and set a season high by a huge margin, registering one of the highest scores of the Division III season. Cami Bea Austin picked up the vault title and Kendall Sanders won the all around.

Implications: This result helps Centenary’s national ranking and its standing within Division III, even if it is still on the outside from a USAG perspective.