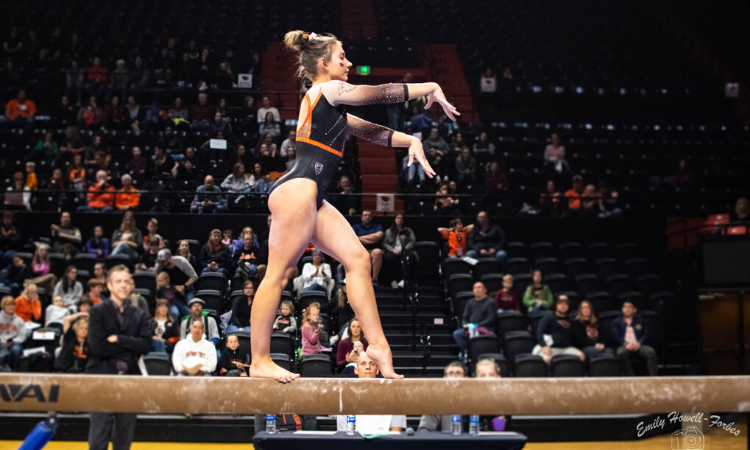 Here we are, in the midst of Serious Intrasquad Season, which officially kicked off around Thanksgiving. This is the time of year that we start getting really juicy hints about who is and isn’t healthy, who had a breakthrough offseason and which gymnasts might really make those lineups. Just in time for your fantasy drafts (lineup submission is open, people!) we’ve collected notes and updates for likely lineups in each conference. Note that while we do our best to be thorough, we may not have updates for every team.

Check out the entire potential lineups series where we walk through teams conference by conference for a refresher.

Mia Townes has been in a boot and may not be available early in the season. Mallory Mizuki appears healthy, but we’ve only seen her on bars and beam so far.

We didn’t see much of the December 5 friendly versus Illinois State, but we know Rae Balthazor didn’t dress. Freshmen Waight and Simons showed a new event in vault, and Takekawa competed in the all around, including a 9.950 on beam.

Iowa has had some big roster changes since we last visited the Hawkeyes. Jax Kranitz and Charlotte Sullivan are no longer with the team. Kranitz was an important bars set, and Sullivan was a capable all arounder. The bars situation in Iowa City just got dicier.

In better news, we’ve seen a lot of freshman JerQuavia Henderson, including with some spectacular floor choreography. Expect her on vault and floor, with the possibility of beam.

Collea Burgess has been shown consistently training a double-twisting Yurchenko, including to hard landings. Expect her to be a big factor in that lineup, even if we never see the upgrade.

Linda Zivat was in a boot for a fairly long stretch of preseason. She seems to be out of it now and has been shown training gymnastics again, but we won’t be surprised if she isn’t at 100 percent by January 4. Look for her on bars, at least.

We’ve had two Gopher intrasquads so far. Notably, transfer redshirt freshman Maddie Quarles put up her Yurchenko one and a half at the latest showcase; she’s almost certainly going to be featured late in that lineup. Lexy Ramler has also showed her Ramler bar skill (a toe-on Shaposhnikova with a full twist; think a van Leeuwen plus one half twist) at Meet the Gophers.

Quarles was spotted in a hospital gown on her Instagram Story on December 6. As of publishing, there’s no word on whether or not she has a recent injury.

Sarah Hargrove had ankle surgery (she called it “small” on her Instagram Story) in October and has remained absent from training updates. Her injury has a big impact on bars.

We’ve seen Kaylee Quinn and Anika Dujakovic on beam frequently; neither appeared on the event in 2019.

Of the freshmen, Kat Thaler (bars, beam) and Clara Colombo (bars, beam) have been featured most often. Kylie Piringer (recovering from an injury last year) has been shown working her double layout on floor, her best event. If she’s competition-ready by January, expect her to appear there first.

Elexis Edwards has been featured heavily in the Buckeyes’ training updates, especially on bars, beam and floor. She appears healthy. Expect her to be an important factor.

Transfer Carleigh Stillwagon, expected to contribute on floor, has retired.

Victoria Fitts graduated early and will join the Pioneers this season. Senior Courtney Loper is now listed as a student coach.

Junior Mia Sundstrom has been showing an upgraded Yurchenko one and a half on vault. We previously listed Alexis Vasquez and Emma Brown as options on bars. Both of them are now listed as VT/BB/FX on Denver’s roster.

Grace Woolfolk, a beam staple in her freshman season, was removed from Iowa State’s roster. The Cyclones also added freshman Maya Ford and two international freshmen are expected to join the Cyclones in January: Jade Vella-Wright and Laura-Rose Cooke.

Both Jade Degouveia and Jordan Draper have shown potential bars routines; both performed at the team’s most recent intrasquad. We’ve also seen a lot of freshmen Ragan Smith, Vanessa Deniz and Brooke Weins in training updates.

Sophomore Olivia Trautman and senior Brehanna Showers were notably absent at the Sooners’ most recent intrasquad. According to head coach K.J. Kindler, Trautman tweaked her foot in warm ups on a leap and it wasn’t worth risking it. Showers’ status is unclear. Junior Evy Schoepfer also debuted a tucked Yurchenko one and a half on vault.

Freshman Jacy Whitehead, who we had listed as a potential contributor on vault, bars and floor, competed only bars and beam at the Wildcats’ most recent intrasquad. Sophomore Hannah Baddick, a staple in the beam lineup, had offseason surgery and did not compete at the intrasquad.

Rylie Dewhurst, who had the highest returning NQS on bars, was removed from the roster.

Senior Megan Tripp, who we had listed as a potential contributor on bars and beam, was removed from the roster, and expected incoming freshman Karla Frank was never added.

Redshirt senior Katrina Coca will miss the 2020 season with a torn achilles.

Freshman Alexis Fuller was removed from the roster, and Sarah Brownstein, a previously unknown-to-us freshman, was added.

Sophomore Emerson Hurst has been showing an upgraded handspring front pike half vault, which has a 10.0 start.

Freshman Kiley Schaefer, who we had identified as a three-event contender, was removed from the roster. Floor star Claire Haklik and Madison Smith did not compete in a recent intrasquad for unknown reasons, though Amy Shen made her ACL return, thus far appearing only on bars but looking strong.

Senior Maya Reimers, who briefly competed a floor routine with two E passes in 2019, is continuing to train both and intends to use the double layout and full-in in her regular routine in 2020. Underclassmen Amanda Loo and Crystal Gwinn are also working E passes on floor.

Junior Melanie Coleman passed away in early November. Cadi Borsellino, another junior who competed three events early in the 2019 season, including a bars season high of 9.850 before a presumed injury, was removed from the roster, as was senior Melena Ristenbatt.

Mary Graceyn Gordon, who missed the 2019 season due to injury, competed in the all around at the Green and Gold intrasquad. Expect her to factor into several lineups.

Freshman Taylor Waldo made an appearance on vault, beam and floor during the intrasquad held on November 25th, so we may be seeing more of her in the lineup than previously predicted.

All three Lindenwood freshmen look like weekly lineup prospects in 2020, with plenty of social media hype for the whole group. However, critical returners Courtney Mitchell and Emily Milliet may not have competed at the last intrasquad, and Mitchell seems to have been limited to bars all preseason.

Mackenzie Slee and UIC transfer Ashley Albrecht were missing from the last intrasquad.

Domi Bonzagni, who was a strong freshman prospect in 2019 and then did not appear in lineups, looks strong in training this year. Freshman Kyla Podges, who we expected to make an immediate impact, will miss the season after a major knee injury.

Reigning USAG national floor champ Tyler Davis looks to be on the comeback trail from her knee surgery but was not yet in routine shape for the last intrasquad.

Alaska will face a depth crunch on vault this year, but the return of Louisa Marie Knapp on that event could help to alleviate it. Knapp, along with Mackenzie Robinson and occasionally Tere Alonso, have been working Yurchenko fulls, though the safer layouts are more likely.

Winter Osborne, who was a possible contributor on bars, beam and floor, is currently out with an ankle injury. No word on if or when she’ll return to training.

We predicted that the Hornets would be able to dramatically improve their difficulty on vault this year. With only two vaults starting from a 9.95 at the last intrasquad, that improvement has not yet materialized.

Mariah York is out for the foreseeable future after ankle surgery.

Ciello Magsanide, who missed the 2019 season with a presumed knee injury, has been training bars this year.

Last year’s most exciting freshman prospect, Liah Bosworth, did not compete in 2019 and now has been removed from the roster. Luckily, the 2020 freshmen have been featured extensively in training updates.

Maia Fishwick is joining the Aggies in January.

Sophomore Abi Solari, who was only able to compete once in her freshman season before a mystery injury, has appeared regularly in training updates all preseason and showed both a front handspring front pike half and a front handspring front tuck full on vault. Another injury returner, Victoria Salem, looks strong on bars though we have not yet seen a dismount from her. Senior Cassidy Keelen has not been seen practicing in months and frequently attends practice in street clothes, so an injury or retirement is possible.

Freshman Jane Poniewaz is injured and will not compete in 2020.

Freshmen Kalyany Steele and Emma Andres each competed a few events at UCLA’s intrasquad. Transfer Samantha Sakti is becoming a real lineup contender on beam, though we haven’t seen floor yet. Kyla Ross has an upgraded bars set that includes a Pak salto.

Freshman Jaedyn Rucker and sophomore Hunter Dula did not appear at the most recent intrasquad. Rucker is recovering from an injury that ruled her out of her last J.O. season, and has not been seen training in Salt Lake City yet.

Geneva Thompson has appeared regularly on beam through the preseason and could compete the all around this year. Fellow three-eventer, senior Maya Washington, has been training a Yurchenko half on, tuck off on vault. Brenna Brooks has regained her Omelianchik on vault and learned a double front, a new E skill, on floor. Amara Cunningham has shown a new full-in on floor.

Mikayla Magee has gotten her Yurchenko one and a half—an upgrade she worked for the 2019 season but never competed—onto a hard surface, but other critical UGA 10.0 vaulters, like Haley de Jong, have not featured in training clips.

Sophomore Arianna Patterson vaulted a front handspring front pike half at Kentucky’s intrasquad. She used to compete a Yurchenko one and a half in J.O., but seems to be trying a different 10.0 start since missing last season.

At the Gymnastics 101 showcase, senior Ruby Harrold competed only on bars due to a “hip injury.” The only freshman in the class to make major contributions was Kiya Johnson; Kai Rivers competed only bars (due to an ankle injury), and Lexie Nibbs showed a Yurchenko full on vault. We also got a first look at Rebecca D’Antonio on vault and in the alternate spot on beam, and of Olivia Gunter on floor.

Only three of Missouri’s freshmen appeared at its recent intrasquad. Those who did made big contributions, with Helen Hu and Sienna Schreiber doing the all around.