Nebraska freshman Adnerys De Jesus is working a double layout. She competed a triple full in J.O., so this is the second E pass in her repertoire.

Nebraska Gets to Work

Official practices are underway in Lincoln, and the Huskers are sharing some updates. Notable in this video is Mykayla Curtis working a switch leap + switch leap series on beam. Curtis only appeared in the vault lineup in 2018.

Anastasia Webb Adding Another Vault to Her Repertoire

Oklahoma sophomore Anastasia Webb is training a Yurchenko one and a half to a soft landing. The Sooner competed an Omelianchik her freshman year, making that two possible 10.0 start value vaults for her.

Hailey Poland Has Herself a Day

Kentucky senior Katie Stuart is also training an upgrade of a Yurchenko 1.5.

The Razorbacks intrasquad this week showed off a number of exciting things for the coming season. Freshman Amanda Elswick is back training with a giant full on vault and a great leap series on beam after being out with an injury her last JO season. Sophomore Sophia Carter previewed her floor routine for the 2019 season set to Phantom of the Opera music and showcasing gorgeous dance, as well as a new back 1.5 to front full tumbling pass. Sophomore Kailey Gillings showed off a great triple series on beam.

Florida sophomore Alyssa Baumann posted a video this past week of her training the onodi to back handspring to layout stepout series that we saw her train last preseason but didn’t ever become a regular part of her routine. Hopefully we see that materialize this year. She also posted a video of a Yurchenko 1.5, which if she were to add that and bars in would make her a very serious all-around threat for Florida.

The Florida freshman posted a video of her training the Double layout ½ this week.

The redshirt junior who is coming back from an Achilles injury last season posted a video of a double layout.

Georgia was busy this week with showcases on all vault, bars, beam, and floor resulting in the first lineup rankings of the year.

Georgia freshman Sami Davis was shown training a switch leap to switch half.

Nebraska sophomore Evan Hymanson is working on an upgraded tumbling pass on floor. He posted a video of himself training a double front half-out pike, an F-rated skill.

Michigan freshman Maddie Mariani was injured during the J.O. season, and just threw her first Yurchenko vault since getting back in the gym.

Bowling Green senior Julia Beyer is training a backhandspring to layout two feet. She competed the series last year, but it is unique enough to highlight anyway!

Ohio State’s Morgan Lowe and Olivia Aepli are training Yurchenko one and a half vaults; Ohio State lost its only 10.0 when Alexis Mattern and her front handspring pike half graduated.

Ohio State senior Jamie Stone continues to work bars, an event she hasn’t competed in college. This week, she showed a Jaeger.

UCLA at Work in the Gym

The Bruins have treated us to many training videos this past week. Redshirt junior Macy Toronjo showed off her double layout on floor, and we certainly hope to see her again in competition this season, and junior Gracie Kramer is back to training a laid out Yurchenko one and a half vault. The freshmen are bringing it, with Norah Flatley looking beautiful on bars with her straddled Jaeger release, Sekai Wright tumbling a double layout, and Margzetta Frazier gave us a peek of her floor choreography which includes voguing, where it sounds like she’s using the same floor music as Brittany McCullough in 2011. Legacy routine in the works?

Arizona State senior Kaitlyn Szafranski is training a full in.

Maya Bordas is training a new combo on uneven bars, a straddled Jaeger to overshoot to the low bar.

Senior Lacy Dagen is working on a double layout on floor, an event she has not yet competed in college. Sophomore Savanna Force is training a full in, while fellow sophomore Colette Yamaoka is practicing a Shaposhnikova to bail handstand on uneven bars. Finally, senior Mary Jacobsen is playing around with a double front half out dismount on uneven bars. She was dismounting with a double front the last few seasons.

UC Davis sophomore and reigning MPSF Gymnast of the Year Hebert has been spotted trying out two new E skills this week: a double layout on floor and a pike Jaeger on bars. Neither is routine-ready just yet, but there’s plenty of time to refine them before January.

Illinois hosted an intrasquad on Sunday, showing upgrades across all four. Rae Balthazor and Haylee Roe vaulted Yurchenko one and halfs. Mary Jane Otto is back on bars, and transfer Morgan Bixler showed a Deltchev. On beam, Julia Hutcherson continues to show solid routines, making it look as though she may break that lineup this year. Balthazor’s new full twisting double tuck is also looking strong.

Denver junior Maddie Karr has been working a hop full over the course of the offseason. She posted an update on her Instagram Story this week and it is looking good.

Oklahoma juniors Maggie Nichols and Brehanna Showers are working some unique beam skills, including a front toss to scale and a back tuck swing down, respectively.

Illinois senior Haylee Roe is training a double Arabian. She’s working into the pit for now, but the pass would be a huge addition to the Illini floor lineup.

Illinois junior Karen Howell is training a double layout, and upgrade from a double pike. 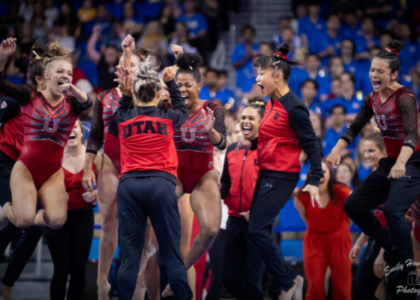