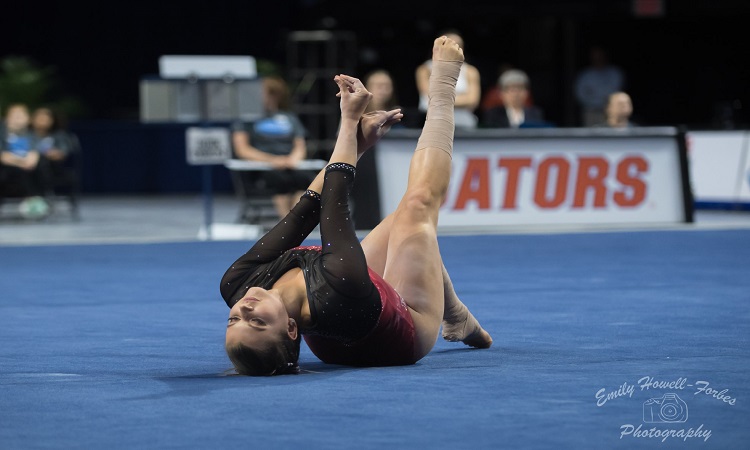 Championship weekend has arrived! I’m here at the State Farm Center in Champaign with the lovely (other) Emily to bring you all of the action. Look for her excellent photos from both sessions in the next few days.

Nebraska, Penn State, Michigan State and Rutgers are competing in the early session. These four teams landed here because they finished in fourth or fifth in their respective Big Five meets last weekend. It is surprising to see Nebraska and Penn State here, but keep in mind that a team from the early session can still win the championship—Michigan has done so before. Scoring tends to be a little tighter early, but Nebraska is known to be one of the strongest teams in the conference and could benefit from a little name recognition bump here. That said, Big Ten scoring has been on the stricter side all year, so don’t expect huge totals from anyone.

If last weekend’s Big Fives are any indication, nerves are running high throughout the conference. Beam was a difference maker for teams in both meets, so keep a close eye on that event today. Nebraska counted falls on bars and beam, and eliminating those mistakes will be key. The Huskers did not seem mentally prepared: Mistakes from veterans snowballed and morale was low. A better meet here will require them to step up the mental game. Nebraska could very well outscore Michigan—the Huskers won the regular season matchup against the Wolverines—but it will take perfected vault landings, eliminating falls and a lot of focus for the Huskers to challenge from the early session.

Penn State also has the ability to make many of the teams in the later session nervous. The Nittany Lions are ranked higher than both Maryland and Iowa and just behind Illinois. They could easily place above all three teams with a hit. The mental game is also key for this team. Briannah Tsang had a tough night at Big Fives, and if she is off again, the rest of the team needs to step up. Penn State landed the ideal rotation draw here, starting on vault and finishing on floor, so look to see if it can capitalize on the home order feel.

This is the end of the season for Michigan State and Rutgers. The Spartans and Scarlet Knights will not advance to regionals, so this championship is about hitting a strong final meet. MSU has battled injuries throughout the year and relied on many freshmen, which has led to a tumultuous season. However, the Spartans are capable of some very strong routines; keep an eye on Lea Mitchell in the all around, as well as Hailee Westney on bars. Rutgers has also battled some injuries and inconsistency all season. The Knights’ season high is a 194.800, so look for them to push for a 195 here. Makenzey Shank was out of lineups last week: She is a senior, so expect her to be back in for her final meet if she is physically able. Her bars and beam are highlights.

An exciting note: For the second time ever, the championship is on podium! Rutgers started the trend last year, and Illinois is carrying it on here. The last time Illinois hosted, in 2009, the meet was held in Huff Hall, the smaller venue in Champaign. Moving to the State Farm Center and adding a podium shows a lot of progress for the conference over the past decade.

March in is underway! Here we go!

Your Spartans will begin the Big Ten Championships on uneven bars! Here is the lineup! #GoGreen #Inspire pic.twitter.com/CUEXDRD3b9

The live score page still has men’s scores up from last year, so we’ll see when that gets going. I’ll update with in-arena scores if I can get them in the meantime!

Alright friends, I have an EXCELLENT view of vault, and…sort of nothing else. Bars view is okay, but I can’t see much of floor. Excuse me if floor and beam notes are brief! I will have a LOT to say about vault amplitude, though.

Michelle Amoresano (RU): Bhs loso, leg up but stays on.

The Nebraska fans here are LOUD.

Lauren Bridgens (PSU): Y1.5, she pulled it out! big step to the side, maybe two.

Jennie Laeng, a Nebraska alumna, is right behind me cheering her head off. Stuck gainer full off the side.

Nebraska looks much more confident than last week. Good but not GREAT start. MSU was great on bars, hitting handstands and landings. PSU had some problems with steps, but vault was clean otherwise. Rutgers is off to a solid start and will be happy if every event goes this well.

Libby Groden (RU): Missed this one!

Williams (Neb.): FTY, hands forward on table and not great distance, but she makes it around.

Epperson (Neb.): FTY, good height and distance, I think they’ll give her a stick.

Tsang (PSU): Hect mount. Big Jaeger + bail. Dlo went straight up and she had a low chest on the landing. Otherwise nice routine.

Huang (RU): FHS 2/1, not quite around. I don’t think they’ll give it to her after the great ones we saw from Nebraska. Switch ring + tour jete, not a lot of height on the tour jete, but good splits. Fhs rudi, better rotation.

Nebraska is looking much better tonight. Rutgers looks good on floor. Some tough landings but overall the Scarlet Knights look prepared as a team. MSU had some wobbles on beam but Westney is an absolute highlight. Penn State struggled on bars. That is usually a great event for the Nittany Lions, and coming back will be tough, especially on beam which is hit or miss for the team.

Groden (RU): FTY, good height, just a bit of a low chest. Her team loves it!

Rizkalla (RU): Ilg! Love love love. Stays on her feet! She sat it in the touch. Just a hop forward.

Huang (RU): FTY piked down, but stuck. Team jumps on the podium for hugs.

Nebraska looks much better this week than last week. The Husker social media squad sitting next to me and mentioned that it was the team’s best bars outing this season. PSU continues to struggle. The Nittany Lions look sluggish. Rutgers is having a great day, and is on track for a season high. MSU was decent on floor, but just didn’t have the amplitude or landings to notch a huge total.

Roby (Neb.): Hit series. Side aerial + full, nice landing. Better than she warmed that up.

Jaranowski (MSU): Handspring pike, big step to the side and off the landing mat.

Rachel Ley (RU): Missed  a skill and had to re=cast. Nice DLO.

Anna Gamelo (MSU): FTY, good landing, just hops to the side. Hands were very far back on the table.

Mitchell (MSU): FTY, nice, just a step to the side.

Nebraska will be pleased with that recovery from last week. The Huskers looked much improved all around. Depending on how scores go in the next session, a 196.95 could put some pressure on Michigan. PSU came back strong on floor, and benefitted from some last-rotation gifts, though overall scores weren’t absurd. Rutgers had some struggles on bars, but had a strong meet overall, and though MSU had struggles on beam, the Spartans should be pleased with their showing here. I believe this is the first meet that they haven’t vaulted a Yurchenko layout in quite awhile, which is a win in and of itself.

Stay tuned tonight to see if Nebraska’s score can hold up agains the Session II teams!