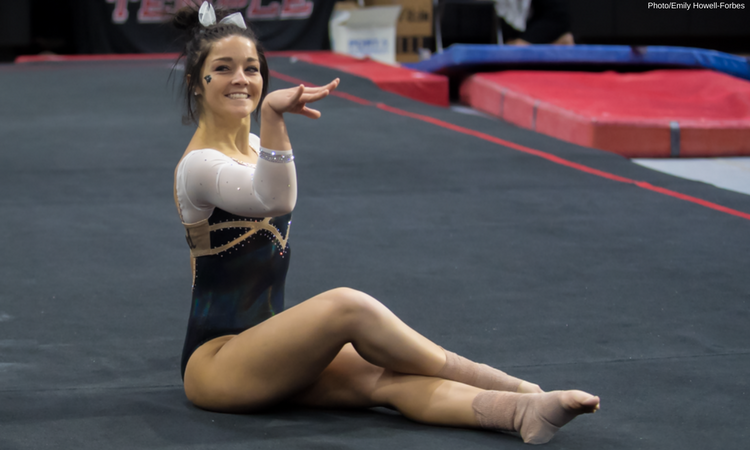 The second half of the NCGA nationals field was set this weekend as Ithaca, Cortland and Brockport qualified out of the NCGA-East Championship. Ithaca set a program record score for an astounding third time this season; the Bombers just keep improving and increasingly have the scoring capacity to make a run at the NCGA title.

In DII action, Lindenwood was the first to break the 196 mark in the 2018 season—the first of its kind in the program’s six-year history. But with the way momentum has been building throughout the USAG season for the Lions, it felt like it was only a matter of time. Lindenwood and Texas Woman’s have been continually rising to each other’s challenges throughout 2018, so expect fireworks as TWU hosts Oklahoma for its senior night this weekend.

Ithaca had yet another program-best day to easily qualify to NCGA nationals for the first time since 2014, claiming its first regionals win since 2006. The team began on beam, typically its best event, and was led by eventual beam champion Emily Szembrot with a 9.675. It also registered the highest bars score with the help of the eventual 2-3-4 finishers Elyse Ryden, Baylie Trammell and Courtney Christoforo. Victoria Gery won the floor title with her fourth 9.800+ of the season on that event.

Cortland scored its third consecutive 190+ mark to qualify in second, led by a program-best bars score from Sidney McConnell. Seven Cortland gymnasts ranked in the top six in apparatus rankings, but the story for the Red Dragons is their consistency; they ranked third on every apparatus. Freshman Emma Schulz, who has scored 9.800+ on floor repeatedly throughout the year, was awarded a NCGA Rookie of the Year recognition.

Brockport was the first seed heading into regionals, and the Golden Eagles showed their pedigree by breaking 190 and qualifying despite a challenging day on bars and beam. Brockport is ranked at the top in DIII standings on vault and floor and was able to win those two events securely to carry itself through. Stephanie Mager and Candis Kowalik went 1-2 on vault, and the five counting floor routines all ranked in the top 11 in the meet.

Lindenwood broke its team record by a margin of over half a point on Sunday to pick up three Division I wins over similarly ranked opponents. The Lions also broke their school records on bars and beam, where they scored an astounding 49.425 that included three marks of 9.900+. Senior Kierstin Sokolowski scored over 9.850 on all three of her apparatus, including a 9.950 on beam that tied her own program record. Ryan Henry also scored 9.850+ on every routine; the sophomore seems poised to become a team leader next year. Beam specialist Emily Milliet completed the trio of 9.900s, tying Henry for second in the event standings. Henry also picked up second place on floor with a 9.875 and tied with Sokolowski for third on bars.