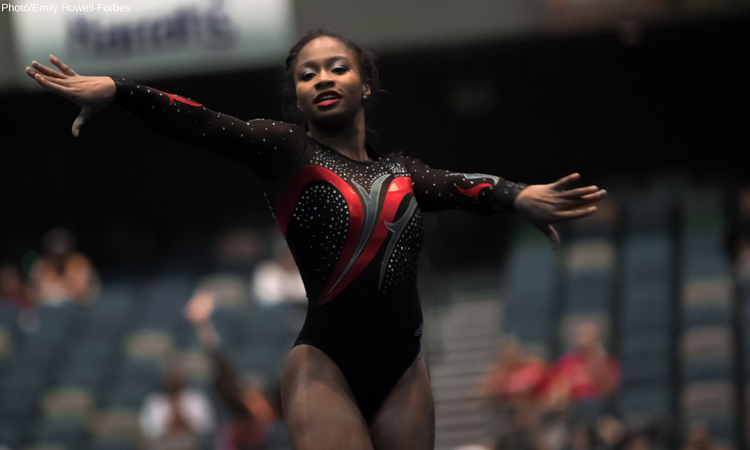 Stanford’s regular season wraps up with its senior night on Saturday, and it would be shocking—and downright wrong—for Elizabeth Price not to walk away with at least one 10. Price has scored under 9.800 only once this season and is as close to a sure thing as it gets in gymnastics. The question marks are more with the rest of the team, who have been too 9.7-y to have a strong shot against UCLA for most of the season. That said, don’t expect scoring to be too tight in Maples Pavilion on senior night; a strong 196 is a plausible result for a hit. UCLA’s drop score is currently a home score, so it’s not hurting for road results, but against a conference rival on a big day, it has a good chance of getting one anyway. It’s always worth keeping an eye on the Bruins’ lineups, especially on vault where they’ve been trying out different ways to accommodate the inconsistency of some of their 10.0 starts, but at their last regular season road meet it’s unlikely there will be too much depth exploration.

UCLA looks fairly full-strength. Putting up 23 is always good news for Stanford, too!

COLE – STAN: FTY, piked down a bit with a small hop back and a bit of leg sep.

DENNIS – UCLA: Off timing on her Maloney, off her swing, can’t connect and has to hop off. Restarting the routine, great this time. Good bail, double layout stuck. She looks

NAVARRO – STAN: Twisting onto the table but good on the air, not crazy amplitude but controlled and stuck.

FLAM – STAN: Omeli, big step forward. Her block is so straight, she landed slightly off line.

HONEST – UCLA: Flies on the Tkachev, blind change to straddle back maybe a bit arched but fine. Full in with a scoot back.

BRYANT – STAN: Big FTY, tried to hold the stick, momentum was moving back and had to step to salute.

A. GLENN – UCLA: Working much more patiently than the first time we saw her, great  blind change to Jaeger, loses swing out of Pak and could have put her feet down but pushes and casts out of it, full turn to double back stuck.

PRICE – STAN: DTY! Off direction and the tiniest bit of legs but stuck dead. I’m not mad at 9.975 there.

LEE – UCLA: Huge Ray, perfect handstand into the Bhardwaj great, leg flicker on an Leeuwen, bounce on her toes into salute but stays planted! 10!!

FITZGERALD – STAN: Crunchy and off line on FTY, but hey, a sixth is a sixth.

ROSS – UCLA: Perfect opening handstand, Maloney to bail, ever so slightly soft in double back there, toe shoot is great, double layout stuck as usual. Okay, that’s like the fifth best routine she’s done this season so it’s funny that’s the one that went 10 but hey, in balance of the season it was time.

Things definitely accelerated at the end there….. Good experience for Anna Glenn to work under pressure, too. Tens are definitely coming for Ebee Price.

Other important information, Felicia Hano has her hair in pigtails.

LAWSON – STAN: Leg sep on shap, bail to toe shoot is okay, messy legs on full turn to double back but stuck.

A. GLENN – UCLA: Never the most height, but better distance than before, and stuck DEAD. Twisted late and it really showed off the block.

NAVARRO – STAN: Nice Tkachev, bit low on a handstand, leg sep on Pak but I’ve seen it worse, full in dismount right on top of the bar with a step back.

TRATZ – UCLA: Powerful FTY, tiny bounce to the side. She was a little forward onto the table, so the block wasn’t the best she could do but it was still good.

FLAM – STAN: Love watching her think through her routine with her hands before she starts. Misses first handstand, very awkward catch on her Jaeger, bars coach accidentally catches her foot because it’s coming towards his face but she hangs on and casts out of it. The rest of the routine happens while we’re processing what happened there. Full in dismount with a hop.

ROSS – UCLA: FTY DRILLED. Beautiful landing on that, flares out and spots and it’ was great. That was the first time I’ve really seen Miss Val jump in to celebrate with a gymnast.

BRYANT – STAN: Over on her first handstand, works out of it. Great Tkachev, Pak is beautiful. Speeding through and just missing a couple handstands but her technique is so beautiful, double layout with a hop forward – randomly flexed one foot in the air, that’s not like her.

HANO – UCLA: Beautiful 3/2, little hop up onto her toes. Doesn’t need to risk it and try to stick, that was a good one.

PRICE – STAN: Maloney to clear hip, Church to bail is awesome, drills double layout. Usual feet on that, but let’s be honest, no one ever takes that. 9.95, why though?

HALL – UCLA: Pressure off now with five good ones down. Usual legs on the air, little shuffle forward but good one!

So weird, things are so cushy at the top of the Stanford bar lineup and then Ebee just can’t get a 10. Why? I don’t understand. UCLA was also scored pretty tightly for the vault rotation they had, I would have had both 10.0 starts at 9.9+ and Kyla could have gone higher than that. But we did sort of expect chaos, Maples can be like this.

KOCIAN – UCLA: Great control on the 2/1 landing, front combo pass is awesome and dances out of it – she’s really started to get the feel of how to control these landings this year. Rudi maybe the tiniest bit crunchy to great straddle – that’s a really good leadoff routine, I wouldn’t be shocked if she stayed there.

TAI – STAN: Triple series, leg up and falls. Off line on her front aerial and falls again. Switch leap to straddle 3/4 is good, staggered on 3/2 twist but lands it.

ROSS – UCLA: Great control on whip double back, leap series always so fab, front pass straight towards Miss Val who throws her arms up and screams, hop forward on double pike – she always has to slightly underrotate one pass. I’ve thought about a two pass routine for her? She obviously has the leap difficulty.

DENNIS – UCLA: Oooh, underrotated on pike full in with a lunge forward. Front full front lay is NAILED, I’m such a sucker for the writing her name choreo. Beautiful double tuck, great college landing – just can’t figure out her strategy on that first pass.

PRICE – STAN: Nailed front aerial, her game face is so awesome. BHS-layout 2ft with a tiny check, full turn is great, switch to split. Double pike with a step back.

TRATZ – UCLA: Full in, right in the corner and hops forward to stay in, 3/2 front full is great. Double back with a little scoot back.

BRYANT – STAN: Full turn, flic layout is my favorite thing. Beat jump to switch that’s more like a beat split than anything – the coolest, punch front and the beam cap popped off from the impact. Double back with a step back.

OHASHI – UCLA: Good double layout, momentum weird in the middle of the combo pass but manages to pull it back on the punch front. Miss Val dancing along. Third pass is great, switch drop, many hugs, the usual.

So we’ve lost our grip on reality.

G. GLENN – UCLA: Elephant nonsense, flic loso off line but basically ignores it. Front aerial – split, again she just ignores that it’s imperfect and it works out fine. Switch switch, oh she changed back to the old dance series! Stick on gainer full.

COLE – STAN: 2.5 punch front was great, Rudi was overrotated and she stumbles backward, front combo pass she’s not prepared to land it at ALL and lunges forward aggressively.

KOCIAN – UCLA: Great acro series, full turn, side aerial is great, she’s so steady. 2/1 with a hop back.

NAVARRO – STAN:  I love this routine. Great control on 3/2 – front lay, double tuck with a bounce in place. That was pretty awesome, very possibly an AA season high for her today!

FLAM – STAN: Gave her the wrong music, Tabitha is not super leased, double arabian STUCK. Front full front pike is great, never very much amplitude on leap series, double pike with scoot back and it’s borderline whether she stepped out. Amanda didn’t see a flag.

OHASHI – UCLA: Aerial flic loso is great, has to step into beat jump out of switch ring, flic loso back full stuck.

LAWSON – STAN: Pivot out of tour jete 1/1, 3/2 thru double back is low but she makes it around with a step forward. Tabitha dancing along is my life. Stick-ish on double pike, just a shuffle.

BRYANT – STAN: Overpowered double layout, okay but has to pick front foot up in lunge. Big stumble back on second pass, awesome open double back to close. Where’s that WE JUST HAD TOO MUCH POWER gif from Beijing?

LEE – UCLA: Amazing Homma, acro series nailed, dance series basically the best I’ve ever seen it, didn’t even fling her leg out on the double, stuck dismount. Yeah, 10 for that is right.

PRICE – STAN: Nailed the double lay, UCLA is dancing along because they’re the best, just the tiniest shift of her front foot on the double back combo pass but I’d be shocked if they take it, nailed the leap series. Perfect college landing on double pike, she couldn’t have done more. There’s the ten. Thank you very much.

UCLA bowing down to that, led by Peng. Aww.

Hmm, guys, who do you think is getting gymnast and specialist of the week this week??? #uncertain

Stanford did not particularly feel like a season high – scores were all around just chaos – but back to back 10s from Peng and Ebee is such a great way to close that one out. With UCLA having literally no RQS stakes (already locked into #1 in the Pc-12, can’t overtake LSU) it wasn’t a bad day for some craziness, either. 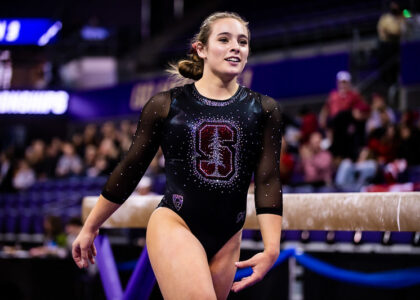 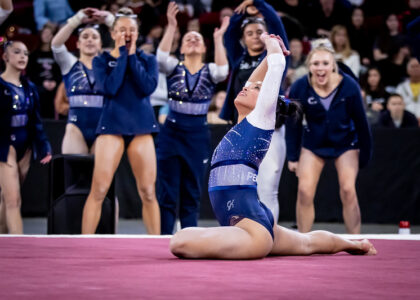