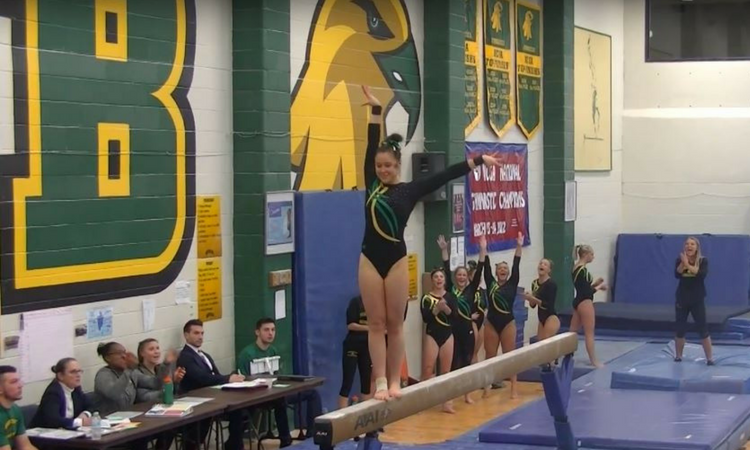 Week four of DII/III gymnastics action wrapped up with both division leaders from week three—Lindenwood and UW-La Crosse—retaining their top spots. Southern Connecticut and Brockport State both recorded their first 190+ scores of the season, and numerous gymnasts, including NCGA-East Specialist of the Week Bailey Gildemeyer of Cortland State, set career highs.

DII Southern Connecticut and DIII Brockport State both recorded season highs to defeat DI Brown. SCSU was led by 9.775s on floor from Alexandra Avendano and Kylyn Dawkins, as well as a runner-up all around performance from Cadi Borsellino. With this performance, all six DII programs have recorded a 190+ this season.

Brockport State set a season high by two and a half points, recording the second 190+ score by a DIII team this season. It also earned a season high on floor with a 48.575, led by senior Brittany Vasile, who has recorded a 9.825 and a 9.850 in her two appearances so far. Springfield College also set a season high by two points in its home opener, producing a program record score on floor in the process. Junior Jess Clemens recorded a career high in the all around, and the Pride was led with a pair of strong floor routines from her and Ali Rushlow, good for 9.775.

Lindenwood defeated host and DII rival Seattle Pacific, as well as UW-Eau Claire in Seattle Friday. The Lions also swept the individual titles with the combined efforts of senior Kierstin Sokolowski and junior Andy Alexander. Lindenwood’s standout event was floor on which it scored a season high of 48.775 with three scores of 9.800+.

Seattle Pacific recorded a season high vault score that included individual career marks from four gymnasts, including vault runner-up Lena Wirth, who received a 9.775 for her difficult front handspring double twist. It also showed a season high floor rotation with a 48.400 that included three 9.750s. UW-Eau Claire’s Tori Erickson set a new career high and school record in the all around. She also tied her career high on vault and set season highs on vault and floor. The Blugolds had four other individual career highs en route to their third place finish.