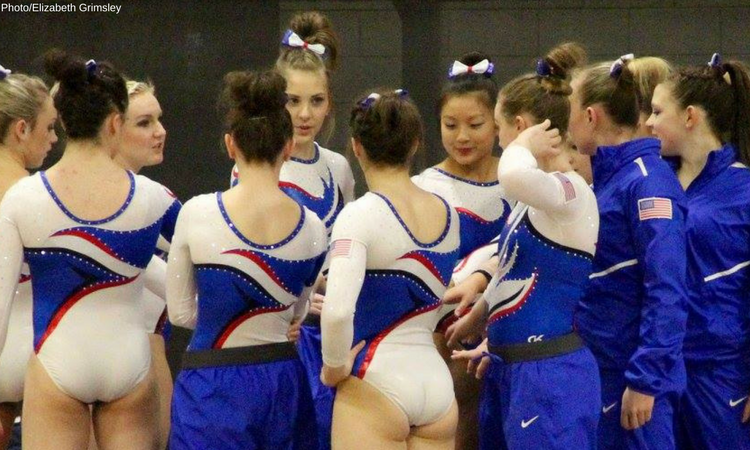 The Denver Pioneers host the Air Force Falcons in their 2018 home opener! The Pioneers look to build upon their start last week against Arizona where, despite maintaining a No. 8 ranking, they scored just a 195.775 after counting a fall on bars. Meanwhile, the Falcons set a team record for opening score under head coach Doug Day last week. Gymnasts to watch for are Lynnzee Brown and Maddie Karr for the Pioneers and Jessica Kirkpatrick and Tyler Davis for the Falcons.

Tara here! I’m coming at you live from Magness Arena for the meet! You can also find me on our Instagram Story at @ncaagymnews.

For today's competition we'll be wearing our "HUA" leos in honor of Military Appreciation day at DU! Competition will begin here shortly so stay tuned for live updates! pic.twitter.com/ZBSULahI6o

Chesnok VT: yfull; overall good. Leg sep on entry and hop back. Not at a good position to judge distance. 9.825

Karr VT: only 5 vaulters again for the Pioneers; best vault of the day so far; nearly stuck 1.5 with a small hop in place. 9.9

Great start for both teams. Thoroughly impressed with Air Force on bars with both difficulty and they all hit with solid scores for the most part! The Pioneers had some very nice vaults as well, they’ll look to hone in on landings later but great for this point in the season! They also will look to get Emily Glynn back vaulting with her 10.0SV tsuk layout full.

Glynn UB: nice first handstand. clear hip to geinger caught! she missed that last week. beautiful bail to hs; and she sticks her full in! The Pios are on fireee with these landings. 9.9

Davis VT: uf. her yfull looked good but she put her hands down. 9.1

Brown UB: maloney to pak, shap half, just some leg form but much improved from her JO form. small hop on double layout

Sundstrom UB: nice opening handstand; clear hip to tkatchev caught this time, but she falls on her bail; stuck double layout to close! fixed her problem from last week, but fell on a different skill. 9.125

Chesnok UB: again nice first handstand; beautiful tkatchevs; has nailed every handstand including bail to hs; ftdt stuck. Gets the Pioneers back on track! 9.925

Karr UB: nice first hs; uf. just a little too far on her geinger and falls. Pioneers counting a bars fall now just like last week; repeats skill gorgeously. stuck dlo. would be a great score had she not fallen. 9.325

Despite counting a fall on bars, the Pioneers remain on 196 pace. The Falcons continued to post solid 9.7 scores and look to best their opening week score.

Bruder FX: each routine has a cue for “Let’s go Air Force” in it. front punch through to double tuck solid but oob. tour jete 1/2 wolf full good. nice and extended; front full front lay short but she saves it. 9.55

Brown BB: love her mount. front aerial front toss check bhs wolf jump. she’s supposed to connect all of that; little tentative full turn; split leap straddle jump good; stuck gainer full; she got more secure and confident as that went on. I *think* she should be ok on SV, not positive. 9.8 so obviously fine there.

Bell FX: short double pike but to her feet; I really want to know if there’s a theme to this choreo here…double tuck good; switch side popa nice; solid combo pass to close. 9.775

Denver showed some very secure, confident beam routines today! No falls and 5 routines over 9.8. Air Force also showed some solid routines, and I’m continued to be impressed by some of the difficulty they have for a team like them. The Falcons had some errors but overall didn’t count a fall.

Uf. Glynn just landed funny in floor warmups and is limping. Headed to training room. Hopefully not too serious, but not what this team needs after losing Ogden and also the tentativeness of Hammen (she has a scooter so it’s not good).

Schou’s 9.95 on beam is a career high and also ties for 5th highest in team history.

Schou FX: fhs double full beautiful! she’s such a nice twister; I’ve loved her choreo ever since I first saw it; 1.5 to lay solid; ring leap to switch side nice; new this year, a spot for the team to yell “Let’s go DU”. last pass solid, close to oob but stays in. Nice leadoff. 9.85

Davis BB: straddle jump to split 3/4 good; fhs to front aerial, what a unique series! straddle 1/4, good; double full with a hop back. Gets the Falcons back on track. 9.7

Andddd Glynn is now gone. 5 up 5 count for the Pioneers.

Glynn has her knee wrapped in ice.

Hill BB: off on series; good full turn; solid on leaps; and off again on straddle jump to straddle 3/4. Looks like she’s hurt. her right foot/ankle. or something. Or maybe it’s a cut? Towel on floor. No clue. 7.2

Brown FX: she’s one to watch for years to come. HUGE dlo to open with nice control! nice combo pass; she has such fun choreo to; ring jump to swtich 1/2 good; short double tuck to close. 9.8

Adidson FX: her music is so dramatic; HUGE dlo to open! 1.5 to lay secure; switch side to popa good; love her her routine is both dramatic and fun! huge double pike to close! she’s so dynamic on floor. 9.925

Jad exo BB: secure on leap series; saves front aerial, not even a check; bhs loso little arm check but good; secure full turn; sissone to gainer full hop; I wouldn’t be surprised if this goes in their lineup soon. 9.625

The DU girls are chanting the fight song now! So cute.

It's official, we just set a record for the highest attended meet in program history with 4,634! Thank you, fans! #DU1NATION

Denver went out with a bang on floor. The Pioneers have many solidfloor routines, highlighted by Addison and Brown of course. Even with counting a fall on bars they manage a 196.8 total score! That was not the way Air Force wanted to end, however. That was not a pretty beam rotation. So many falls. They had a solid meet until beam. In the end, the Pioneers take this one.