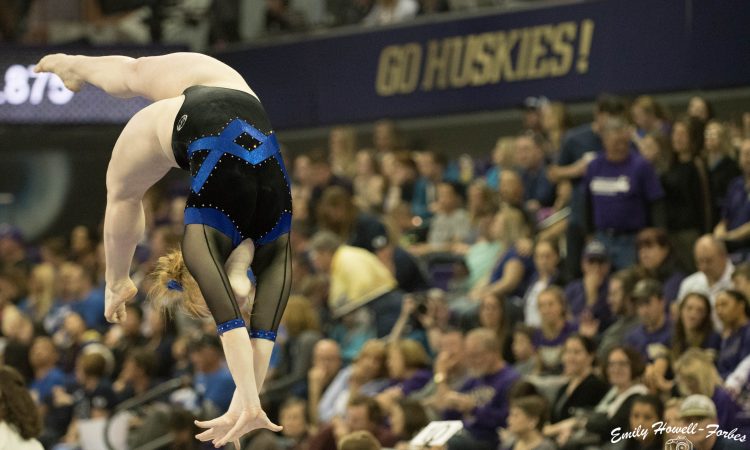 The Colonials of George Washington, Cardinals of Ball State and Redhawks of SEMO are all paying a visit to the Wildcats of Kentucky to open up their 2018 seasons. Following last season, Ball State and George Washington both lost a strong group of senior gymnasts. But that doesn’t look like it will cause many problems for them as they both also return top all around competitors from 2017, as well as welcome a handful of fresh faces to their rosters. For SEMO and Kentucky, they also welcome a handful of freshmen to their squads. The main difference for these two teams is that they are returning the majority of the routines showed a year ago. Between the strong upperclassmen presence and the six to seven freshmen joining each of these four teams, it looks like they are all in great shape to pick up right where they left off last season.

Alex Hyland (Kentucky): FTY to start Kentucky’s season. Good vault in the air, comes up a bit short on landing. 9.725.

Katrina Coca (Kentucky): Another FTY, a bit of form issues in the air but a strong landing. Just a small step to the side on the landing. 9.750.

Sidney Dukes (Kentucky): Big Yurchenko 1/2 in the air! Unfortunately had a bit too much power and bounced forward on her landing. 9.750.

Danaea Davis (Kentucky): Strong FTY, bit of bent knees in the air and pikes it down a bit. But nearly sticks the landing with just a lit bit of pogo stick action. 9.850.

Aubree Rosa (Kentucky): HUGEEEE FTY, great distance! Lands nearly at the back of the mat. 9.775.

Mollie Korth (Kentucky): The star sophomore is back with the sole 10.0 SV vault for the Kentucky team. A hop on landing but overall strong. 9.850.

Julia McLaughlin (GWU): Some little issues on her handstands and a low double tuck dismount. But had great rhythm overall. 9.650.

Jordyn Penny: (Ball State) beautiful straddle jump, so highhhh and toes pointed! Started off beautiful but winds up falling. Doesn’t seem to fully recover from the fall, wobbly throughout the rest of the routine. Steps to the side on her RO 1.5 dismount. 8.900.

McKinzie Jones (SEMO): -only showed the end of her routine- Chest down on the rudi to end her routine. 9.750.

Alexis Brawner (SEMO): Last years SEMO star is back anchoring floor for the Redhawks. Sticks her double tuck no problem. Looks like she is having lots of fun out there! Ends her routine with a sky high double tuck. Should be a great score. 9.800.

Having some major connection issues, sorry if the updates are slow or if bits of info are missing. Working to fix it!

Kentucky looked good on vault considering it’s only the first meet of the season. Some form issues in the air and they didn’t stick landings but those are things that are easy to fix as the season progresses. Stream is mostly following Kentucky.

Katie Carlisle (Kentucky): High and beautiful straddle Jaeger. Mostly strong handstands, a bit over on the last one. Great height on her full-in dismount. Great leadoff for the Wildcats. 9.775.

Ella Warren (Kentucky): Originally a 2018-19 signee, she graduated early and is already in Kentucky’s lineup. Another high Jaeger for Kentucky. Beautiful toe point throughout this routine. Really stands out! DLO dismount, has to pikes down significantly in the air to get it around. 9.800.

Alaina Kwan (Kentucky): One of the highest Jaegers from the Kentucky team thus far. Leg issues on the bail but otherwise a great routine. 9.650.

Korth (Kentucky): Ouch, face plants her piked Jaeger. Gets back up and finishes strong with a difficult FTDLO dismount and just a small hop back. 9.100.

Jillian Winstanley (GWU): First we are seeing from this GW senior. Takes a while to prepare for her flight series. Goes for her front aerial, and falls off. Trying hard to pick it back up. High RO 2/1 dismount to finish off strong. 8.600.

Hannah Cohen (GWU): BHS-BHS-LOSO to start for this GW freshman. Looks like she had it but wobbles and ultimately falls off the side. Another wobble on her leap series. Comes back strong with a stuck front aerial and gainer full dismount off the side. 9.050.

Rachel Benoit (Ball State): -only showed last pass- But it was a great double tuck for this exhibition routine! Wish we got to see more out of Ball State, SEMO, GWU in this stream. Looks like they are all having some great routines.

Scores after the second rotation:

Katie Stuart (Kentucky): Off to a bit of a wobbly start. No problem on her BHS-LOSO series. Has beautiful flexibility! Sticks her RO tuck full dismount. Solid lead off. 9.750.

Korth (Kentucky): Unique one arm BHS-LOSO and sticks it cold. Cat leap-switch leap-back tuck completed with no problem. SHE IS ON. High and flighty RO 2/1 dismount with just a small hop on the landing. Great comeback from her bars mishap! 9.800.

Hailey Poland (Kentucky): First routine of the night for the sophomore. Starts off with her BHS-BHS-LOSO series. Not bad in the air but bends at the hips on landing. Stuck gainer pike off the end of the beam. 9.725.

Hyland (Kentucky): Cat leap-front aerial a little off and opts to not connect into her BHS. No problems after that little mishap. Tiniest of shuffles on her cat leap-side aerial-full dismount. 9.850.

Warren (Kentucky): -exhibition- side aerial-BHS. Hands completely miss the beam and she is off the side of the beam. Regains her composure quickly. Goes for a RO 1.5 dismount major stutter steps on the landing.

Aside from Kwan’s fall, Kentucky had a very strong showing on the beam. Looks like their beam team is picking up right where they left off in 2017. Expect big things from them as the season goes on.

Scores heading into the last rotation:

Stuart (Kentucky): Sticks her double pike to begin her routine. Lots of energy in this arena! 1.5-punch front layout (so floaty!) in the middle. Ends with a rudi, chest down on the landing. Not a bad start for the Wildcats. 9.675.

Poland (Kentucky): First competitive floor routine for the sophomore starts with an unusual front tuck through to a rudi. Great to see something a little different. A little crossed legs on her front 2/1 second and last pass. 9.825.

Cori Rechenmacher (Kentucky): Starts with a whip through to stuck double tuck. Another Kentucky gymnast who only competes two passes on the floor. The second one is a double pike. Great to see a little bit of uniqueness out of a team! 9.825.

Hyland (Kentucky): Sassy routine from the junior. Starts off with a stuck double pike. Finishes with a 1.5- punch front layout. Big leg separation on the layout but otherwise clean. 9.875.

Korth (Kentucky): High double tuck as her first pass. Bounces out of her landing a bit and nearly goes out of bounds. FHS-Rudi-LOSO some leg form issues on her middle pass. Finishes with a double pike, again some small leg issues in the air but overall another strong showing for the star sophomore. 9.850.

Dukes (Kentucky): Smiling from the second she steps on the floor. Chest a little down on her double pike. Front layout-front full with beautiful leg form! Sticks her double tuck to finish the meet for Kentucky. Her form and attention to detail really stands out throughout this routine. 9.900. Well deserved.

Kentucky had a strong showing for their first meet. Some minor issues peeked through but starting the season with a 196.075 says a lot. Kentucky looks ready for another record breaking season. The coverage did not really show full routines from any of the other three teams but based on scores, Ball State had a great start to their season, watch out for them this season. George Washington struggled significantly on beam with 3 scores below a 9.100, but they will work out those issues as the season progresses.

Unofficially, the Ball State Cardinals LOCK IN SECOND PLACE OVERALL with a total team score of 194.475!!!