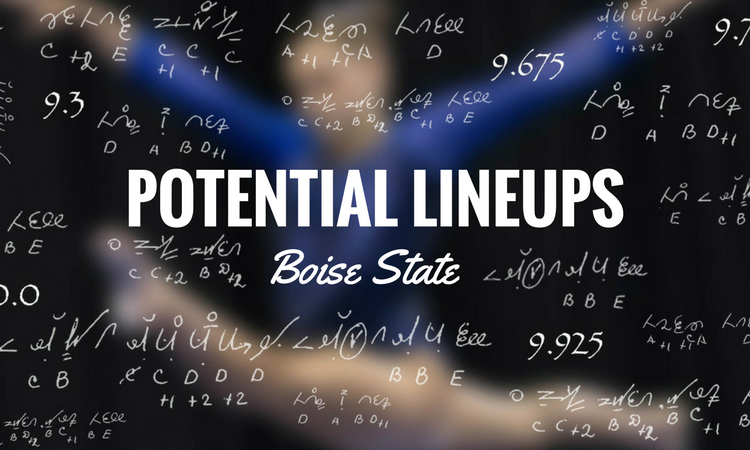 Our first of three bonus analyses this season will take a look at Boise State. Falling just short of a national championship berth in 2017, the Broncos bring in a solid new class of freshmen and return a few from injuries as well.

The Broncos are actually in good shape on vault, with a wide arsenal of returning 10.0 start values. But the freshmen can add to this as Rachel Obmann is training a Yurchenko one and a half. Emily Muhlenhaupt and Tatum Bruden are also strong vaulters, with Muhlenhaupt competing a strong full and Bruden a Yurchenko half. Tessa Otuafi has also worked a lovely Yurchenko half, but her scores aren’t as consistent as some of her classmates. With all the talent in the vault lineup, we don’t expect to see these latter two regularly, but they will make good alternates if someone needs a rest.

The real story here is the strength of the Broncos’ existing lineup. Ranked No. 14 at the end of last season, Boise State has four returning 10.0 vaults. Courtney McGregor, Sarah Means and Ann Stockwell all compete Yurchenko one and a halfs—all earning 9.9s at different points last season. However, each had issues with consistency, but McGregor is the only one of the three without a fall to her record. Mary Frances Bir competes a handspring pike half and has been incredibly consistent with it, making her a likely choice for lead off. Star all arounder Shani Remme was a steady scorer most of the season, save one fall, so though she only has a full, she’ll likely be given a spot. And Sandra Collantes will hopefully make a return to the all around this season after dropping down to just bars and floor last season following a minor injury. We haven’t seen her training vault this preseason, but floor looks up to full strength. All things considered, here’s the vault lineup we’d propose for Boise State this year.

Like usual, bars was easily the best event for the Broncos in 2017, finishing the season ranked No. 5. But losing two of its best routines in Mackenzie Bennion and Diana Mejia is a blow that won’t be easy to mitigate. They’ll need significant contributions from freshmen to keep pace. Luckily, Muhlenhaupt’s strongest event is bars, and with her floaty releases and clean lines, she should be able to score well—even as a freshman. Gabriela Bouza is another option. Her routine has a natural swing and good handstands, though her Tkachev could use a little more amplitude. Both of these routines will need new dismounts or connections to be up to the level, though.

The bars veterans will also need to step up, but that shouldn’t be too tall an order, considering just how many bar routines the team returns. McGregor, Remme and Collantes are all capable of scoring 9.9s on a regular basis. Stockwell’s ceiling may not be quite that high, but she’s a consistent scorer, making her a great choice to lead things off. Means and Maddi Nilson competed bars a handful of occasions last season but look good in training and could provide solid depth with their competition experience. Here’s who we’d consider to be in the top six for Boise State’s squad this year.

Beam was another strength for Boise State in 2017, finishing the year ranked No. 13, a position higher than the likes of Iowa, Georgia and California. The freshmen should continue this trend, as Bruden and Bouza both make cases for their inclusion in the top six. Bruden’s consistency is a welcome addition, considering most of the returning gymnasts aren’t solid enough to lead. Bouza is all lines and pointed toes yet inconsistent compared to her fellow newcomers. Obmann is another option, though despite her nice lines, she’s probably too prone to falling to be considered an option for the top six.

As far as the veterans go, Means and Alex Esmerian are the strongest. Means didn’t have a single score under 9.825 all season, and Esmerian hit 9.925 at the end of 2017. The latter is a bit more inconsistent—half her scores were under 9.8 and half were above—but she now has competition experience and is expected to be a contender in 2018. Remme is also a strong beamer, capable of 9.9s despite having a few miscues here and there last season. Beam is not McGregor’s strongest suit, but it’s likely she’ll still earn a spot based on her fight; she didn’t have any falls in her freshman campaign. Collantes and Isabella Amado are both expected to return to beam this season, but with little evidence, it’s hard to put them anywhere but as alternates. Below you’ll find the rest of our proposed beam team for the Broncos.

Floor was the weakest event for Boise State last season if you can call 17th weak. Losing Bennion means losing one of the team’s strongest floor sets, but Obmann should be a more than capable replacement. Her strong full in, unique Rudi to back tuck combination and playful showmanship make her a great candidate for the Bronco’s floor squad. Bruden and Bouza are also good candidates, with different strengths to their routine. Bouza’s tumbling isn’t the most powerful and she could use some work on her stamina, but her musicality is excellent. Bruden has great pop in her tumbling, and her whip to double pike looks upgradeable. She also seems to have a knack for playing to the crowd, which will serve her well in NCAA.

The veterans, too, show promise, with four E passes likely returning to the lineup. Remme, Stockwell and McGregor all contributed excellent routines last season, with the former two competing front double fulls and McGregor a piked full-in. Collantes is also expected to return to full form and bring back her own full-in, as she has shown in training videos. Means has the standard double pike routine that should be a great lead-off while Abby Webb came in as a late-season option with a routine that has nice pop in her double pike and even scored a 9.9 despite having a few falls. Here’s our proposed lineup for Boise State in 2018.

Two-time NCAA qualifier Remme should have no problem returning to the all around. She finished her year ranked No. 17—the top gymnast from a non-Big Four conference team. McGregor is another likely choice, though she may be in and out of beam due to consistency. Collantes is also a possibility if she is fully healthy, but vault and beam will be harder lineups for her to crack with all the new talent. Overall, Boise State’s outlook for the season is siilar to 2017—strong and a definite contender for nationals qualification.