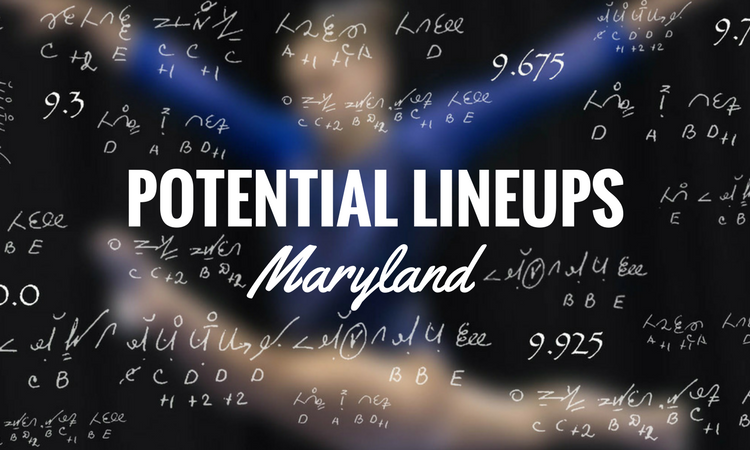 Today we’ll tackle Maryland’s potential lineups. They may not have made regionals last year, but the Terps did have an important season in making strides toward becoming a more competitive team—an important showing after losing two of its best gymnasts to transfers. In 2018, Maryland will look to capitalize on the continued improvement of its veterans, as well as a few key new freshmen.

Vault is not the team’s strongest event, but the potential is there for it to be. Incoming freshmen Audrey Barber and Karrie Thomas both have strong Yurchenko fulls that could score well in college competition. Sabriyya Rouse also competes a full, but we can’t find any recent footage, so counting her as a choice for the Terps is difficult. Collea Burgess and Emilie LeBlanc both only vault layouts, but they’re clean enough that, in a pinch, they could be called upon to join the lineup for scores in the 9.6 range.

However, Maryland’s group of returning Yurchenko fulls is far from weak. Morgan Bixler led the pack, scoring higher than 9.75 most weeks and even notching a 9.9 on one occassion. Alecia Farina also had a strong showing in her freshman season, frequently scoring 9.75 or better. Kirsten Peterman had middling success with her full, but she’s also training a pretty viable one and a half that could give Maryland its first 10.0 start since the devaluation of the full. Other returning Yurchenko full options include Deanna Magro and possibly Emma Johnson, though no footage could be found to confirm, which vault she performs. Below you’ll find our proposed lineup for the Terps for the coming year.

Bars was a weaker event for Maryland last year, and the loss of senior Sarah Faller won’t be easy to overcome. However, Thomas and Barber will again look to contribute to improve the team’s outlook. Thomas shows some excellent stalder work and height on her Jaeger, while Barber has a difficult Hindorff to overshoot combination. Both had promising scores in J.O. to help further their case for a lineup spot. None of the returning bar workers are particularly consistent, so we’d actually pick Barber to lead. LeBlanc is also a decent option, with good power in her Jaeger, but she’s not the strongest scorer.

The Terps have a few excellent returning options, including Farina who reached 9.9 once last season and frequently sat in the 9.8s. As the only returning competitor with this kind of scoring potential, she’s the easy choice for anchor. Peterman is another a higher-scoring option, tallying a season high of 9.85 but staying more in the 9.75 range on a given week. Shynelle Agaran and Evelyn Nee are both decent scorers, hitting in the 9.75 to 9.85 range most weeks but had some issues hitting here and there. Megan McClelland and Amanda Bertorello also competed bars a handful of times in 2017 but were more sporadic in scores and appearances. Here’s a look at who we’d put in Maryland’s bar lineup this year.

Beam and Maryland didn’t get along last season as the team ended the year ranked No. 46, about 10 places down from any other event ranking. Stability and consistency issues plagued the team, so the Terps will look to their freshmen to provide much-needed steadiness in 2018. Barber and Thomas were the standouts, with high-scoring, dependable sets that make them almost interchangeable in the lead and anchor positions. Stylistically, Barber has the more unusually composed routine, showing off a press handstand mount and a double tuck dismount. Thomas actually has the higher ceiling between the two but by a small margin. LeBlanc set is gorgeous, with confident, aggressive choreography and great extension throughout both acro and dance elements. Expect Maryland to make full use of her on this event as it’s her strongest.

The veterans fall a bit flat compared to the newcomers. But three strong freshmen don’t fill a full lineup. Peterman is a likely contributor, spending most of the season at 9.7 or higher. Her consistency isn’t confidence-inspiring, but now that she’s had a year to adjust, things should come more easily. Nee hit a few scores above 9.8, and her seniority makes her a good candidate for lineup leadership. Dominiquea Trotter was a beam specialist for the Terps last season, staying consistent in her scores but only reaching a high of 9.75. She’ll provide good stability, though. Farina competed beam a few times last season, but with only a 3:6 hit ratio, she may not make the lineup now that there are more consistent options. Agaran had a few scores above 9.8 but didn’t compete often and still fell twice while Magro competed more consistently but had a lower average score around 9.65. They’ll do for alternate options but are not top-six worthy right now. Here’s what we’d propose for the Terps’ beam lineup in 2018.

Floor was Maryland’s best event last season, finishing the year ranked at No. 37. While a number of returning Terps can provide decent-scoring routines, we fully expect the freshmen to steal the show with their big tumbling and showmanship. Barber and Thomas are again the standouts, with the former’s scores lower but incredibly consistent and the latter sporting a couple of impressive titles, including the current Florida state championship. Both also compete full-ins, which would give Maryland two much-needed E passes. Another strong freshman contender is Rouse, who hasn’t competed since 2016 but showed excellent scores in 2016. Her high double pike, musicality and excellent shaping in both choreography and dance elements would make her a fabulous asset to her new team. LeBlanc is also an option, but her floor scores in club were much more inconsistent, and she didn’t even compete floor every meet. While she may end up as more of an alternate, it’s definitely a class of floor workers

That’s not to say the the veterans will be completely pushed out by freshmen. Farina and Bertorello both crossed the 9.9 mark at least once in 2017 and each only had one fall. Both compete the typical double pike routine, but Farina could have enough power to upgrade in the future. She’s also quite the engaging performer, so expect to see her late lineup, even if a freshman secures the anchor spot. Peterman had her ups and downs, with a couple of falls but a season high of 9.85. However, floor was one of her best events in elite, so if she can recapture some of that greatness, she’ll easily improve her college scores. McClelland was a fairly consistent performer last season but often got stuck in the 9.6 to 9.7 range, making her more likely an alternate now that there are better options. Trotter is the final veteran option—only competing floor twice last year but more often in 2015 for steady 9.75s. Though she hasn’t shown that kind of work in years, she may be called upon to step into the lineup if needed. Below you’ll find our proposed floor team for Maryland’s 2018 squad.

In the all around, Barber and Thomas are no-brainers, both placing the top 20 of their divisions at nationals despite having issues on beam. Their fairly balanced sets and competitive skill vocabularies will boost Maryland’s competitiveness. Peterman and Farina will be the best hopes for the veterans, though don’t be surprised to see Farina bumped from beam purely due to her inconsistency. Overall, Maryland’s outlook improves significantly thanks to its incoming class. It may actually be able to make regionals should the team remain healthy.