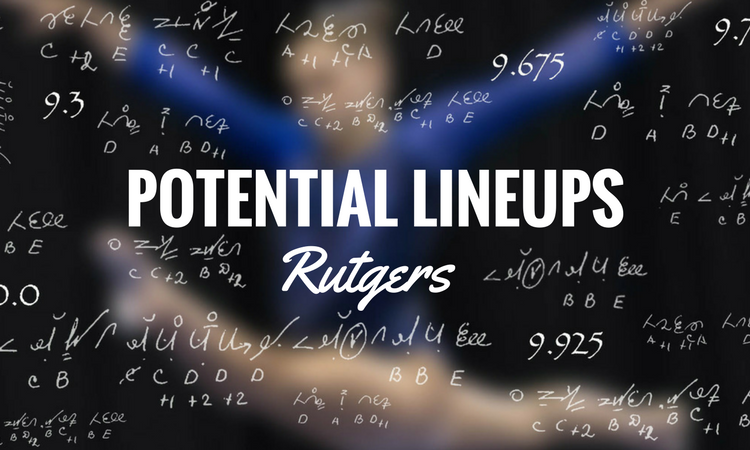 The newest member of the conference, the Scarlet Knights struggled some last year, failing to make regionals—one of only four Big Four conference teams to do so and—and finished 2017 ranked no. 49, the lowest of anny Big 4 conference team. But with some strong incoming freshmen, a few promising transfers and veterans returning from injury, Rutgers just might be able to make regionals for the first time in four years.

Vault has been grim for the Scarlet Knights, especially in comparison to the rest of the Big 10. Luckily, the freshmen should be able to help that situation. Belle Huang is expected to be the star of this class. She competes a solid Yurchenko full that does have some leg form and is inconsistent in her landings, but a 9.55 high score in J.O. is something the team will appreciate. The standout newcomer on vault, though, should be Toni Williams, whose Yurchenko full is as high, clean and stickable as almost any vault you’ll find in the NCAA. Sophia Atienza has a Tsuk tuck full, which only starts from a 9.9, so she may have trouble cracking the lineup until she can perform it nearly perfectly. Emily Drauss vaults a very clean Yurchenko layout, but the skill only starts from a 9.8. However, if she’s the cleanest option, head coach Louis Levine may put her in over messier, more difficult vaults to minimize deductions.

Of the veterans, the strongest vaulter is unfortunately out for the season as Riahanah Ali was seen with a knee injury and on crutches in early preseason. This will hurt Rutgers more than just on vault; she was a good backup beamer and one of the team’s best on floor as well. Chloe DeVries will look to pick up the slack, competing a solid full that scored 9.75 or higher in innn five of eight attempts. Michelle Amoresano vaults a Yurchenko layout half. Her high is a team-best 9.875, but more often than not, she was stuck at or just under the 9.8 mark. Vault isn’t the best event for all arounder Libby Groden, but we still expect to see her in the lineup, thanks to her consistency. After starting the season with a layout, Erin McLachlan later upgraded to a full, scoring as high as 9.85. And Jenna Rizkalla has a handspring front pike, which starts from a 9.9. Her scores were wildly inconsistent in 2017, which will likely force her into an alternate position, but she does have the experience to step in if needed. Take a look below at our proposed vault squad for Rutgers this year.

Bars was Rutgers’ worst event last year, finishing the season ranked No. 59, lower than even some Division II teams. It’s going to need a major change of pace and will look to the freshmen to make that happen. Drauss has two solid D transitions to put her up to the level. Williams has some rough leg form and is often short on her handstands, but her releases get great air and her dismount is much more convincing than Drauss’. Huang’s set is short and to the point, completing all of her routine requirements in just two combinations while still being up to the NCAA level. She has some leg form on her bail and her dismount but should still see time in the lineup.

As for the veterans, Groden and Makenzy Shank were the only two to reach 9.8 last season. Shank anchored, and as a senior and one of the team’s highest scorers so she’ll likely keep the role. The lead-off spot is another discussion entirely, but based on recent training videos, Kaitlyn Hall is a strong choice. With three solid scores, each better than the last at the end of last season, she’s poised to be a solid competitor on the event for Rutgers. Amoresano was also a bars regular in 2017, but midway through the year, she fell and couldn’t seem to recover, falling every other week from then on.

Two gymnasts we could also see contributing to bars are Emma Karas and Shannon Farrell. Karas spent last season injured but has been featured in preseason training videos and seems to be fully healed. She may be vying for a spot in the lineup, but without any scores to go on, we’ll keep her as an alternate for the moment. Shannon Farrell, a transfer from Arizona, didn’t make any competition appearances in her freshman season but has shown readiness in training videos. Bars is her strongest event, and Rutgers needs every routine it can get, so she earns an alternate spot as well. Check out the rest of our proposed bar lineup for the Knights below.

Beam was the strongest event for Rutgers in 2017, and it’s the only event where it returns any 9.9s. The freshmen will look to add to this trend. Drauss’ strengths are in her form: Her extension in her legs, her perfect shapes in her leaps and jumps and her toe point are polished throughout her routine. Huang’s unique combinations, such as her wolf hop to side aerial, should earn her excellent scores in college competition, but she’ll have to become more consistent. Atienza has clean form and is able to make adjustments like a veteran, but her lack of attack and outward confidence keeps her from shining on beam. Hannah Prieto is the opposite of Atienza; she has a lot of attack and confidence, but her form, particularly in her dance elements, is lacking. However, if the Rutgers coaching staff can figure out a better routine, she may prove to be more reliable than some of the veterans who competed last year.

Of the returning beamers, Shank is by far the strongest, hitting routines for 9.8+ and reaching an elusive 9.9 once. While Shank will certainly anchor, Groden will likely lead off as one of the few gymnasts who had no falls inn 2017. Polina Poliakova also showed promising work on four inches, as her scores steadily improved week by week up until she fell was taken out of the lineup for the remainder of the season. Eriel Santagado only competed beam once last season for only a 9.225, but in 2016, she was one of the team’s better performers. If she can return to that kind of performance, she’ll make the top six, but for now, we’ll keep her as an alternate.

As far as those who didn’t compete in 2017, Hall looks like an excellent choice. From various training videos and her inclusion on both beam and floor in the most recent intrasquad (the first competitor on beam at 55 seconds), it seems she’s making a push for the all around by developing her weaker events. Based on her performance in training, we would be willing to give her an early lineup berth, especially when compared to previous results from many of her peers. Rizkalla also looks promising but less confident overall than Hall, so we’ve opted to put her in the first alternate position. Find the rest of our proposed beam lineup below.

Floor will be one of Rutgers’ weaker events, especially with Ali out with injury. Huang and Williams have very similar sets: Both compete double backs, Rudis in combination and two and a halfs with solid landings. Huang and Williams, as well as Drauss, who is a great twister, have club scores that indicate they’ll be at least decent scorers in college. Atienza and Prieto might also be options, but they were less consistent across the board. Atienza has moments of dance greatness, hitting subtle marks in her music really nicely. And Prieto has large amounts of confidence and personality, but her tumbling lacks pop. Both could step in if necessary, and based on past experience, it’ll be good for Rutgers to have as many viable alternates as possible.

Rizkalla and DeVries are the only veterans returning with scores of 9.85. Each also has an E passes, with a front double full and double arabian, respectively. Groden is another a key lineup contributor, with lower scores but only one fall. She, too, has a front double full, the cleanest E of the bunch.

Like on beam, Hall did not compete floor in 2017, but her work in preseason looks promising. Her double pike at the three-minute mark here isn’t to a hard surface but shows good progress. We’d say it’s worth an alternate berth for her. Take a look below to find the rest of our proposed floor squad for Rutgers.

In the all around, Groden and Huang are the obvious choices. As a veteran, Groden qualified to regionals two years in a row, and she’ll be instrumental in keeping the team’s lineups stable in 2018. Huang, though a freshman, will likely be one of the team’s best scorers, earning late lineup spots on all four events. Her all around average puts her at No. 40 among all incoming freshmen across the country, which makes her a huge asset for Rutgers. Hall is also a possibility, as we’ve seen her returning to at least beam and floor in addition to the promising bar set she showed last season. Vault remains a mystery, but should she find herself capable of at least a Yurchenko full, she may find herself in all four events.

One gymnast we haven’t mentioned is Rachel Ley, a transfer from Missouri. She could be an excellent contributor on vault, beam or floor, but unfortunately, we’ve had no evidence of her training. If she’s ready, she could be a huge asset as well.