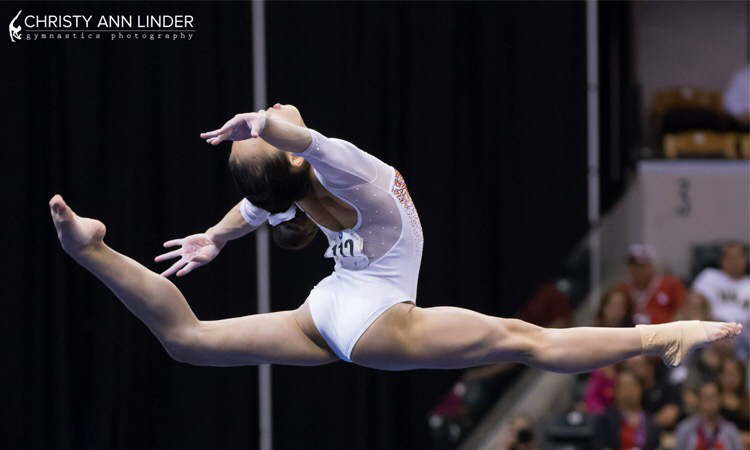 At NCAA Gym News, we’re equal opportunity gym-lovers, so after talking about all the things we’re excited to see from last season’s top 25 teams, we wanted to give some of the other schools a little love. Here’s our list of lesser-hyped teams and all the things we’re looking forward to from them in 2018.

If we were to sum up our Stanford excitement in one word, it would be rebirth. With new head coach Tabitha Yim at the helm and a huge, talented incoming class, we are so excited to see the team’s rejuvenation. Newcomers Kyla Bryant, Rachael Flam and Taylor Lawson were all been big names on the J.O. scene for a while, and Lauren Navarro was a U.S. National Team member before dropping back down to have a stellar final season at Level 10. Combine that stellar class with a more energetic, transparent coaching staff, and it makes for a very exciting season at The Farm!

For Arizona State, it’s all about seeing just how high the team can continue to rise. Following the retirement of longtime head coach John Spini, Arizona State faced a couple of rough seasons full of transfers and injuries. Last season, the team welcomed Jay Santos as head coach and the team has only improved since his arrival. Losing minimal routines from the 2017 campaign, the Sun Devils are looking to continue their rise up the national rankings and qualify a full team to regionals. With the addition of 2012 Olympian Anne Kuhm, LSU transfer Kaitlyn Szafranski, 2015 World Championship competitor Maya Williams, as well as two J.O. National qualifiers, Arizona State has incredible potential. In addition, the team welcomes former Utah standout, Kristina Baskett to the team as a volunteer assistant coach. Is 2018 the year Arizona State rockets back up the rankings? We can’t wait to watch it all unfold.

Freshmen are always one of the most exciting parts of the season, mostly because they are the future of their respective programs. At BYU, the future looks bright and full of possibilities. For 2018, the Cougars will return all of their regionals routines, as well as welcome 10 (!) freshmen to the roster. With two seasons under his belt and lots of routines to choose from, how will Guard Young and his young team fare this season? Only time will tell but the future sure looks bright.

Division III gymnastics has been on the rise the past few seasons, and Springfield College is no exception. Since welcoming head coach Jenn Najuch in 2016, the Pride have constantly been improving. The 2017 season saw them setting new team and individual all around records, and they also qualified their whole team to NCGA nationals for the first time since 2010. With the graduation of record holder, Marissa DeAngelo, the team will look to their strong upperclassmen to lead them to continued success and hopefully another nationals appearance as a team. Keep your eye on this team in the coming years as they continue their rise up the DIII rankings!

In 2017, Western Michigan broke numerous team and individual records as well as finished the season with a record high RQS. But with the end of the season came the graduation of five seniors who contributed many of the team’s routines last season. For 2018, the team welcomes six freshmen who all had strong J.O. careers and are likely to see immediate action. With the help of this freshman class, can the Broncos qualify a full team back to regionals after finishing No. 38 in 2017?

The newest team in the NCAA has proven itself to be one to watch ever since its start in 2012. This past season was definitely no exception. In 2017, the Lions captured their third consecutive MIC title, placed third at USAG Nationals and broke numerous records along the way. Under the leadership of senior and two-time NCAA regional qualifier Kierstin Sokolowski, Lindenwood looks to be in a great position to have another record breaking season. We can’t wait to watch this exciting young team and their continued success in the coming year.

Coming off of a rough season full of drama and nagging injuries, Michigan State is looking to begin a new era of success in 2018. Following the 2017 season, interim head coach Mike Rowe was promoted to head coach and that new era officially began. Under the leadership of co-captains Anna Gamelo and Jessica Ling, the Spartans will look to send their senior class off on a high note and qualify a full team back to NCAA regionals. We are so excited for this new era at Michigan State and believe it will be full of great things!

Despite all the coaching changes and the departure of yet another high-scoring upperclassmen in Catie Conrad, we’re excited to see if the Eagles can overcome all the adversity thrown their way. They’ll be led by senior Kendall Valentin, as well as super senior Lacey Rubin, who is returning for another season with her stellar bars and beam sets. Can Eastern Michigan continue its streak of strong seasons and win another MAC title this year? We hope so!

Temple is coming off its most historic season yet, and its rise doesn’t look like it will end soon. Head coach Umme Salim-Beasley coached the Owls to new heights in 2017 and superstar freshman Daisy Todd is poised to continue a record-breaking performance. We think Temple’s best is yet to come, and we cannot wait to see its stardom rise.

The Tar Heels have been one of our favorite underdog teams to watch recently, but what we’re most excited for about them in 2018 is the addition of their two new assistant coaches! Marie Case and Taylor Spears are huge gets for head coach Derek Galvin, and we think they’ll lead UNC to yet new heights in 2018.

BGSU has had its ups and downs over the last few seasons, breaking a school record and making it to regionals in 2016 and then falling ten places to No. 46 in 2017. However, we’re still excited to see what its senior class is capable of in its final year. Shannon Goniewiecha will hope to return to competition after being out last season, but it’s really the two U.K. gymnasts we’re most excited to see. Lauren Mitchell’s beam routine is always a treat to watch, and we fully expect her last season to be even better. India McPeak has finally found her college niche, competing three events last season and scoring 9.8+ on beam and floor.

To say Minnesota had a rough year last year is an understatement, but we fully expect 2018 to be different. Its incoming freshman class, though small, is absolutely top notch, featuring J.O. stand out and difficulty daredevil Lexy Ramler, the elegant Ona Loper and the ever-steady Lexi Montgomery. We’re so looking forward to seeing how they can bring the Gophers back to their former glory.

Penn State has been through the ringer to say the least. But it seems that dawn has broken and the new day is coming with new head coach Sarah Shire Brown at the helm and a totally revamped attitude overtaking the team. We can already see her effects on social media: There’s far more transparency of information, she’s featured every single team member individually on Twitter and she’s even publicly spoken about the whole team seeing a sports psychologist. We are so happy she’s moving the team in a healthier, more constructive direction, and we can’t wait to see what that does for the Nittany Lions’ performance come January!

Article by Caroline Medley and the editors at NCAA Gym News