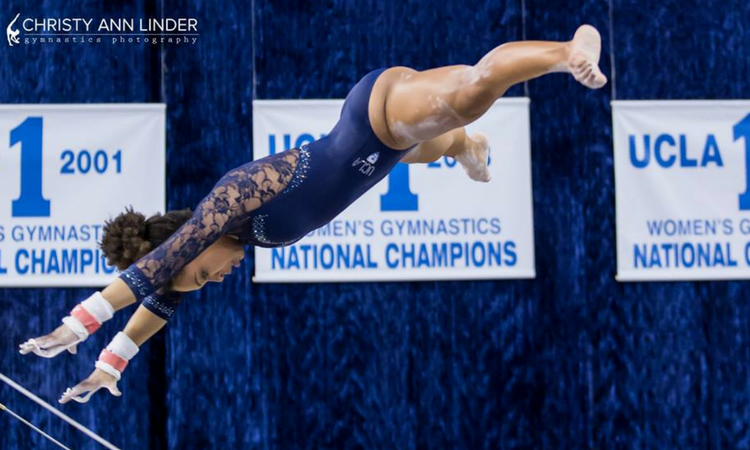 Most gymnastics fans know about the big name scholarship athletes on each NCAA team, but many walk ons have turned out to be major contributors as well. Division I teams are allowed a maximum of 12 scholarships, so walk ons are crucial to help fill out lineups and provide needed depth. These nine gymnasts in particular made a huge impression on their respective teams.

After serving mostly as a beam and floor alternate for Oklahoma during her freshman season, Brown had a breakout 2016. She became one of the best beam workers in the country, finishing third nationally and becoming a first-team All-American. She also became a staple of the floor lineup. As a junior in 2017, Brown once again was a key member of both the beam and floor lineup and looks to be a very significant contributor on those two events in her senior year. Note that Brown was given a one-year scholarship in 2016 due to Brenna Dowell deferring a year to try for the Olympic team.

Since walking on to UCLA her freshman year, Meraz has been a contributor on all four events for the Bruins, with career highs of 9.875 or better on every event. And in 2016, she even led UCLA in points scored throughout the season. Her teammate Janay Honest is another walk-on who is a huge contributor for the Bruins. She has a career high of 9.9 on vault, 9.95 on bars and 9.925 on floor and in 2016, hit a perfect 36 for 36 routines. Both Honest and Meraz have earned scholarships for their upcoming senior year at UCLA thanks to their hard work on the competition floor and off.

Berlin’s life story is incredibly inspiring and deserves it’s own article, but looking purely at gymnastics, she contributed a huge amount to UCLA’s success during her time as a Bruin. Berlin walked on to the UCLA team in 2006, not expecting to compete at all but became a consistent all around gymnast right off the bat and having a phenomenal freshman season, becoming the co-Pac-10 Freshman of the Year and hit 96 percent of her routines. After receiving a scholarship for her remaining three years, Berlin was a star for the Bruins for the rest of her career and graduated as a four-time All-American and one of the most consistent Bruins ever, hitting 96 percent of her 182 career routines at UCLA.

Yernberg walked on to the Gopher squad and made her mark in a huge way during her freshman campaign, becoming the first Minnesota gymnast ever to score a perfect 10—a mark she hit on vault. With her unique floor routine to go along with her vaulting prowess, Yernberg earned a scholarship and went on to be a star for the Gophers on her two best events for the rest of her career at Minnesota.

Rachel Goldenberg walked on to the Kent State gymnastics team in 2009 and became a huge contributor to the team’s success. She contributed on both vault and floor exercise and helped lead Kent State to its first ever national championship appearance in 2010. Because of her contributions, Goldenberg earned a scholarship and went from having to fight to make the lineup to being the vault anchor, ranking first on the event in the MAC during the regular season her senior year.

During her time at UGA, Mary Beth Box became one of the Gymdogs’ star beam and floor workers. After only competing twice her freshman season, Box became a first-team All-American on beam and competed 15 times on that event and 13 times on floor as a sophomore. Box anchored the Gymdogs’ beam lineup for the majority of her senior year and was chosen to carry on the Georgia moonwalk tradition started by Nikki Childs in the mid-2000s. Her success eventually led to a scholarship for her senior year.

Keely McNeer competed for the University of Alabama from 2014 to 2017 and was a key member of the Tide’s lineup on vault, bars and beam. McNeer went from competing two routines as a freshman to 44 her sophomore year and continued to be a major factor in Alabama’s success during her junior and senior seasons, graduating with a career high of 9.9 or better on her three events and as an All-American on uneven bars. While she never earned an athletic scholarship during her time in Tuscaloosa despite her obvious success on the competition floor, she was on academic scholarship throughout her time there.

Kelsey Eriksen competed for the Georgia Gymdogs from 2004 to 2007. After walking on to the Georgia team in 2004, Eriksen was a star right off the bat. The highlights of her incredible freshman season, include becoming the SEC Freshman of the Year, earning second-team All-American honors on bars and posting a 39.65 in the all around, a mark that had not been reached by a UGA gymnast since 2001. She continued to excel throughout her career, becoming a first-team All-American on bars, floor and in the all around, as well as a second-team All-American on beam her sophomore year, winning the SEC all around, vault, bars and floor titles her junior year and was a star for the Gymdogs on bars her senior year despite being plagued by injuries. She later earned a scholarship but, prior to that, was arguably one of the best walk-on gymnasts to compete in the NCAA.