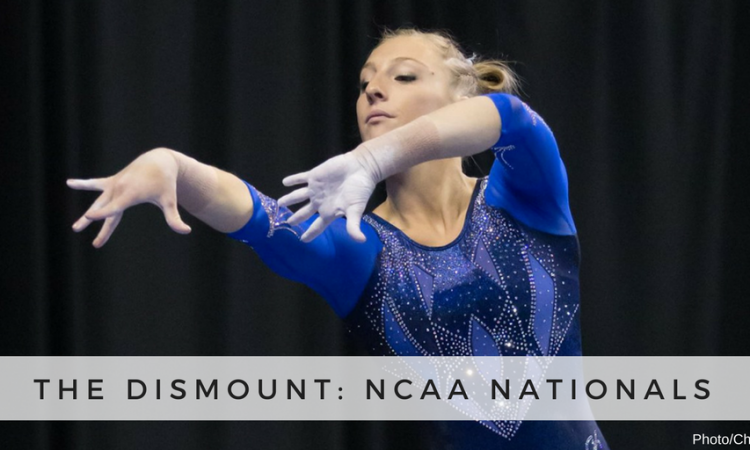 The weekend gymnastics fans waited all season for was over as soon as it arrived. And, it did not disappoint. We were treated to stellar gymnastics from the very first semifinal all the way through the second session and onto Saturday’s Super Six. But in case you were under a rock or not able to watch everything that unfolded, we’ve got you covered with recaps, results and more in the final Dismount of the year.

What an incredible night! The #Sooners make it back-to-back and □□□ in four years #ChampU

While we originally expected a tight battle down to the last routine between OU and LSU, Saturday night quickly and undoubtedly became the Sooners’ coronation. We knew they would be better than semifinals but didn’t expect them to run away with the title so easily. The Sooners were dialed in, paced well and displayed their best gymnastics at the best time. After a bye in the first rotation, they started on bars and dominated from the start with stuck landing after stuck landing for a total of 49.5875—a new championship record. Moving to beam, they kept the near-flawlessness going and set a Super Six record of 49.7000 on the event (which lasted about two hours until LSU broke it in the last rotation). Coming back from a fall the day before, freshman Maggie Nichols took out the punch front that gave her trouble and went for an easier routine, which ultimately led her to scoring another 10.0 on the event. It was just the fourth 10.0 ever scored on beam at the NCAA championships and the first earned in the Super Six. UCLA’s Peng-Peng Lee also scored a 10.0 later in the meet on beam. After these two rotations, it was hard to imagine how Oklahoma was not going to win the meet. Floor was the event that gave the Sooners the most trouble on Friday during their semifinal, with a lot of bouncy landings and a few out of bounds. During Super Six, the Sooners were precise, confident and once again stuck most of their landings, putting their semifinals difficulties in the past. This gave them a lead of over seven tenths heading into the final rotation over the closest contender. The vault rotation was capped off by one of Jackson’s best Y1.5 this season, which she nearly stuck, followed by a drilled Y1.5 from Nichols. These vaults clinched the second-straight title and third overall for the Sooners before the other teams even finished on their own events. With such a dominant and undeniable performance, the Sooners set a new NCAA record for team score (198.3875) at the Super Six, topping the previous mark established by themselves and Florida (198.1750) back at the 2014 NCAA Championships. The score was also the highest ever at a national championship.While OU was “flying away with it,” as Kathy Johnson Clarke would say, the real story of this meet was the battle for second place between LSU and Florida. The Tigers were coming off an incredible showing during their own semifinal where they posted what was at the time the highest team score at the NCAA Championship (198.275) and they were just outstanding on all four events, never scoring below a 49.4. Unfortunately, they were unable to replicate that performance and could never catch up to the Sooners here. Just like OU, LSU was on a bye during the first rotation, then moved on to its two best events floor and vault. They suffered some uncontrolled landings from the start and overall couldn’t stick many of them on both events (and on bars later on in the evening). They still got respectable 49.3250 and 49.3000 totals on floor and vault, respectively, but it wasn’t the start the Tigers needed to put pressure on OU. LSU was never really able to find its momentum through the meet, but it did close out strong on beam where it scored a new NCAA record on the event with a 49.7250. The Tigers were behind Florida at that point, but a 9.95 from Gnat was just enough to put them into second place. The Gators started out on beam and gave everyone a scare when Rachel Gowey came off on her flight series. Fortunately, they were able to put up five solid routines overall and thus created great confidence for the rest of the competition. They closed the meet on bars where McMurtry capped off the rotation with a 10.0, the first on the event by a Gator at the Super Six. It looked like Florida would finish as the runner-up all night, but LSU’s outstanding performance on beam ultimately pushed the Gators to third place. However, Florida loses zero routines from this year’s Super Six, and we can be sure it  will be back in the hunt for another national title next season.

UCLA came in fourth, and just like LSU, was not able to replicate its fantastic showing from semifinals. The Bruins started on vault where they scored a 49.1000 with a Y1.5 from Hall and five Yurchenko fulls, but only one close to stuck from Kyla Ross. With a disadvantage in start values from the get go, UCLA really needed to stick these easier vaults if it was hoping for a podium finish and to pass OU, LSU or Florida. The Bruins a decent bars rotation and were able to come back from a fall from lead-off Sonya Meraz on her Ray. Beam was UCLA’s best event of the evening with a total of 49.4875 and highlighted by Peng-Peng Lee who (finally) received a 10.0, the first of her career on the apparatus. Of course, it wouldn’t be a UCLA meet without a few last-minute lineup changes. Meraz was originally slated to compete on beam and floor, but was replaced by Hallie Mossett and Ross on each event, respectively, which would eventually give us the same lineups as during semifinals. Mossett was the last gymnast competing during the last rotation, and had all eyes on her for her final floor routine ever. All in all, and after a year plagued by injuries, UCLA’s fourth-place finish is promising for the upcoming seasons, but the Bruins will really have to up their vault difficulty as it is their biggest weakness right now if they want to contend for the national title and not just depend on average showings from the other teams.

Utah finished fifth with a score of 196.5875. The Utes opened the meet on floor but weren’t able to get the start they would have needed to really hang with the top teams, with a few gymnasts bouncing out of their landings or going out of bounds. Skinner was the highlight of that rotation with a 9.925 and unmatched tumbling. Utah was also shaky on vault, but were able to put up stronger performances on bars and beam, where it ended up scoring higher on both of these than on its strongest events (vault and floor). The Utes did show some nerves in their final rotation on beam, where senior Baely Rowe had a fall and broke all of our hearts, and sophomore Shannon McNatt had a big break in her routine. Just like UCLA, Utah had to deal with a lot of injuries this season and should be proud of this fifth-place finish. Additionally, the Utes will only lose Rowe, so this team has a bright future ahead as well.

A surprising storyline of this meet was Alabama’s implosion on bars and beam, where it took itself out of the running even before the halfway point of the competition. The Tide looked nervous on bars and rushed through its routines, which eventually led to a fall from Amanda Jetter and uncharacteristic mistakes from Kiana Winston and Katie Bailey. It wasn’t able to get itself back into it for beam, where it had to count a fall after Maddie Desch and Keely McNeer came off the apparatus. Counting a mistake, let alone a fall, at the Super Six with a such a deep field is nearly impossible to come back from, so the Tide had nothing to lose on its last two events. And like coach Duckworth reminded us, “Gymnastics is what we do, it’s not who we are, and this meet doesn’t define us.” The Tide went for broke on floor and vault, with a last-minute substitution on floor in favor of Jetter so she could perform one last time as a senior. With the pressure off, Alabama was able to finish the meet strong and to score a 196.000 to land in sixth place. 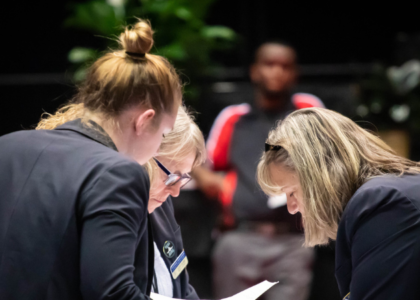