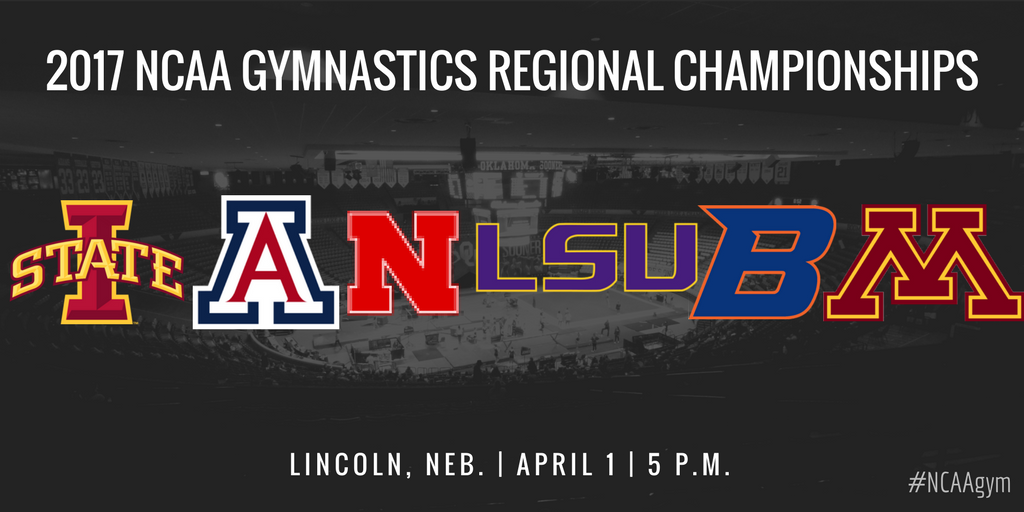 Each regional competition is exciting for different reasons. Some have no clear-cut advancing teams, others are more interesting for their individual prospects. The Lincoln regional, however, should be a little bit of both. While LSU should sail through barring absolute disaster, the second spot is wide open with a couple evenly matched teams with a good chance and a couple evenly matched teams with an outside chance—but all with viable individual qualifiers.​​Don’t forget to

enter your postseason predictions in the 2017 NCAA Gym Bracket Challenge! The deadline for submissions is Friday, March 31 at 7 p.m. ET.

We won’t spend too much time on LSU. After cruising to an SEC Championship title, their first since 1981, the Tigers are showing no signs of slowing down and are poised to move on to the national championships with little difficulty. This meet will be more about fine-tuning lineups and polishing off routines to get all the mishaps and mistakes out of their systems before it really counts at NCAA prelims and, more importantly, the Super Six. With a solid floor lineup still in doubt—will it be Kennedi Edney, Sarah Finnegan or someone else entirely—this meet should be all about that decision. Plus, if anyone is nursing small injuries or pains, the meet in Nebraska will be the time for last minute resting as the Tigers should be fine to advance even without a big name or two.

The real competition will come for the second qualifying spot between Boise State and Nebraska. While the Broncos are higher-ranked, Nebraska is competing at home. And we all know how much of an advantage that can be. Both Boise State and Nebraska are certifiable bars teams. It’s their strongest event and the place where they can really capitalize and separate themselves from other teams. That being said, a miss on this event, or lack of 9.9-routines, and that could be the end of the nationals hopes. Boise State should also be concentrating extra hard on the beam rotation as it’s the event that’s held the team out of nationals many times in the past, including last year. The Broncos, if solid on the other events, can win that last qualifying spot on this event with strong sets. Nebraska, on the other hand, also needs to hit beam, but needs to capitalize more on its vault rotation, not only performing the 10.0 start values it’s capable of but performing them well. It’s not enough to just throw the harder vaults—they have to make it worth it. Boise State will have the luxury of starting on vault and rotating in Olympic order, finishing on floor in the last rotation and hopefully taking advantage of the inflating scores throughout the meet. Nebraska, on the other hand, starts on a bye but ends on beam, a tough task in any situation. But with qualifying hopes potentially on the line, hitting will be even more important.

Then there’s Arizona and Minnesota, both with viable chances of making it to the next round if any of the top teams falter. Minnesota knows the spoiler roll well, booking itself a trip to nationals just last season when Denver couldn’t manage to put it together at regionals despite being the higher-ranked team. The Gophers, with a hit meet, could put pressure on the teams ahead. However, that would mean consistency on bars and beam, something that hasn’t happened too often this season. Even the rotations at the recent Big 10 Championship were sub-par. Arizona, too, can challenge with mediocre performances from those teams ranked higher. But it’ll be harder. With bars and beam and strengths, the Wildcats will be focusing more on hitting their vaults to the best of their ability as that’s a weaker event for the team with less overall difficulty and amplitude than some of the other teams in this region. Iowa State could advance, but it would take a lot of help from everyone else. Just making regionals is the prize here as the Cyclones have been in and out of the top 36 over the past few years.

The individual qualification spots will be harder to come by in this region with LSU most likely taking most of the top event titles. So don’t be surprised if only the two guaranteed all arounders advance out of Lincoln. As for those spots, it’ll really depend on which teams advance. Assuming LSU does move on—it would be silly not to—either Boise State or Nebraska will be left on the outside looking in. Boise State has strong all arounders in Shani Remme (No. T-17) and Courtney McGregor (No. 48). However, McGregor is still a bit green in her college career and might not quite be up to the level to qualify to nationals on her own just yet. The Broncos will just hope to advance a full team and not have to worry about it! As for if Nebraska is the team left out, Jennie Laeng (No. 22) is the obviously all arounder choice. However, the Huskers also have freshman Taylor Houchin (No. 36), who is coming off being awarded the Big 10 Freshman of the Year award. But don’t count out Cyclone Haylee Young, who is capable of 9.900s on beam and floor and holds an AA RQS of 39.370 as she sits in a tie for No. 19 in the rankings. Arizona doesn’t have a true all arounder but Minnesota could see Ciara Gardner or Bailie Holst qualify with good meets.

Also, in a weird culmination of rules, all individual qualifiers to this regional are from Air Force with at least four Falcone gymnasts competing on each event in Nebraska. It’ll be interesting to see the type of “team score” the individuals can put up. And while none of the competitors have a real chance at advancing, it’ll be a great tune up for them with USAG Nationals a week after regional competition ends.