Skip to content
Facebook0Tweet0Pin0
By Caroline Medley and Elizabeth Grimsley 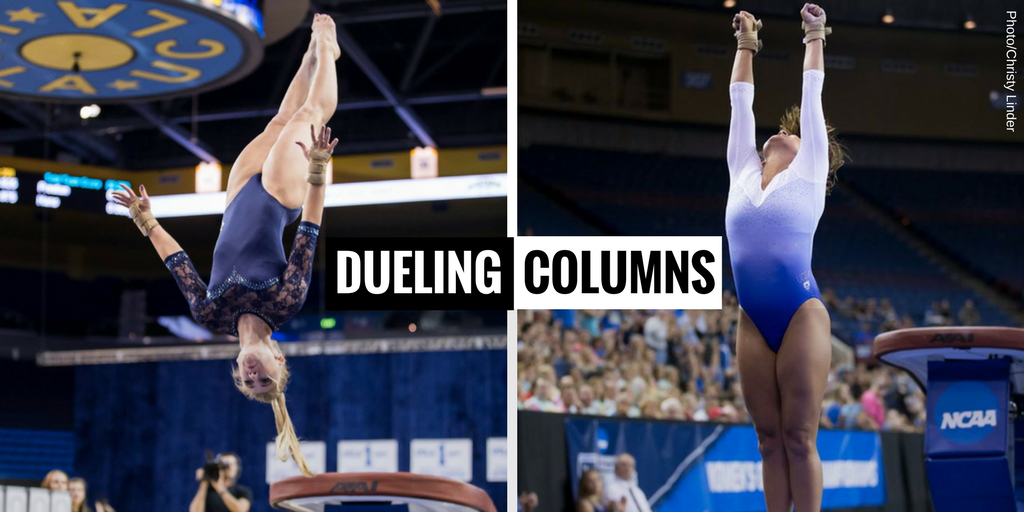 In a new feature for the site, two of our editors, Caroline and Elizabeth, discuss whether or not gymnasts should go to 10.0 start-value vaults or stick with the 9.95s. For a more technical analysis of the situation, read the Balance Beam Situation’s piece on the subject. For clarity, note that Caroline’s opinion is stated in regular font while Elizabeth’s is in italics.
Since there is no real incentive for difficulty built into the NCAA code, particularly with vault, the question does pose itself: Why would a gymnast try a 10.0 SV vault that’s slightly harder than the 9.95 SV vault she already does if she will never get a perfect 10? Well, here’s a couple reasons.

1. Even hundredths of a point make a difference. In an interview after nationals last season, D-D Breaux made a comment about how she was watching OU on floor in the last rotation while her girls were on vault, and she had to wonder—were their start values making a difference? All the OU routines were out of a 10.0 already, but all of LSU’s vaults were not. Believe it or not, LSU’s deficit to OU in the final rotation was just five hundredths of a point. Had LSU started four 10.0 vaults, instead of the three they had, and they’d been performed at the exact same execution level, that last rotation score would have tied. If they’d had all six as 10.0 SVs, performed with the exact same execution and assuming no judging bias, their event score would’ve been a 49.675. It wouldn’t have quite gotten them the win, but LSU would’ve been just one tenth shy of beating Oklahoma.

2. Judging bias is real. We all know that Ashleigh Gnat gets 10s she doesn’t deserve because she does the DTY. It just happened to Maggie Nichols this weekend with her Y1.5. But because the NCAA code doesn’t really make allowances for difficulty bonus, the judges end up doing it on their own. It’s so impressive that they have to reward the gymnast more leniently than they probably should. Now this isn’t exactly a good thing, since we don’t want gymnasts being rewarded for better gymnastics than they perform, but teams and gymnasts have to take advantage of it when they can.

I see what you’re saying and agree in part. But I’m here to counter some of those points. Yeah, Oklahoma might have had been at a deficit before it even began due to lower SV vaults, but that doesn’t necessarily mean it was automatically lower or at a disadvantage. It’s only an advantage to Oklahoma if the 10.0 vaults are performed well. You can do Yurchenko 1.5s all you want, but if it’s sloppy or has steps or hops due to the blind landing, it’s not really helping you out that much, is it? Take Myia Hambrick, for instance. At LSU’s Gymnastics 101, she scored a “perfect” 9.95 for her Yurchenko full. And at the first two meets of the season she scored near-perfect 9.925s. But then she switched to the one and a half for meet three and *only* scored a 9.85. She basically traded a tenth for half a tenth in start value. Of course, it was her first time competing the new vault, and it can get better with time, but in this case, Hambrick’s gamble didn’t pay off.

Then you talk about judging bias. We all know it’s a thing. It’s a BIG thing that’s present in NCAA gymnastics (unfortunately). But I don’t think performing harder vaults is going to remedy that. Yeah, bigger, harder vaults will probably get scored a touch higher or more leniently, but that’s really only true for the Yurchenko family. I don’t see Yurchenko half-ons, full-ons, Tsuks or even front handsprings onto the board getting the benefit of the double, and nearly all of the gymnasts doing them complete a flip that allows them to start from a 10. What we really need is for judges to start judging those different families of vaults more fairly (because, let’s be honest, can you really see the judges toughening up on DTYs any time soon?).

Personally, I think the Myia example is a fluke. Usually, when gymnasts upgrade and hit, they are rewarded for taking the risk. Take Jenna Bresette—doing the Omelianchik instead of the FTY not only got her into the lineup but earned her a 9.9 at SEC championships last year! And that was with being completely to the side of the table in her preflight, off to the side when she landed, and a little hop on the landing. I’m no judge, but that sounds like more than just a tenth to me.

That’s also a great example of another vault family getting the benefit of the doubt, as you pointed out. I will concede, many of them don’t get the same bump that a Yurchenko double does, but this one certainly did. I think there’s a small area between not seeing a vault enough and seeing it too much that makes judges grade it less harshly, and I think the Omelianchik is starting to hover in that in-between space. The DTY is done by only a handful of gymnasts in the NCAA, but somehow, vaults from other families still seem less common. How else can judges encourage more variety but than to give a higher SV and maybe more lenient deductions?

I love your point about not seeing a vault enough and seeing one too much. You know how they say practice makes perfect. Well, if I was a judge and judged hundreds of FTYs over and over again, I would know exactly what to look for. Or I may even get bored with the skill and gloss over errors (gasp!).

But alas… It appears we’ve really come to the conclusion that it depends on the judge and the gymnast on whether or not upgrading is worth it or not. For some gymnasts, it obviously helps (see Gnat) while others, at least so far (i.e. Hambrick) should stick with their beautifully perfect 9.95 starts.