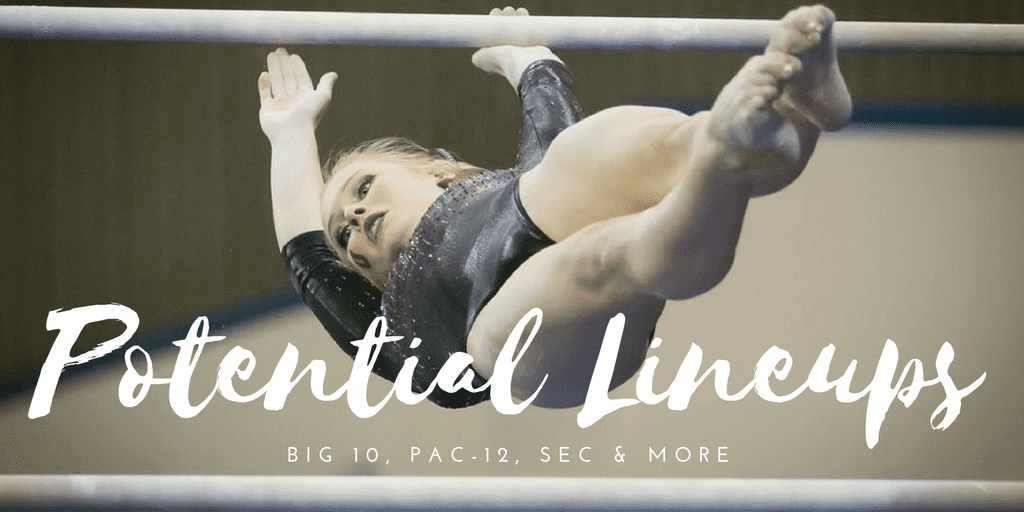 In our final potential lineups article of the preseason, we’ll analyze the Utah State Aggies, who ended their 2016 season at No. 30. After a massive loss of seven seniors, will they be able to bounce back and improve on last season’s finish? Their preseason training push and huge new class of freshmen seem to say it’s possible.
Vault last season was a bit of a bounce-fest for USU, as many gymnasts had trouble sticking even in postseason. Fighting for landings should be a big emphasis this season for the Aggies, especially if the veterans want to up their scores. As far as difficulty goes, the veterans are a mixed bag. Hayley Sanzotti and Madi Ward should both return Yurchenko fulls, Bailey McIntire may return to a full after competing an arabian at the end of last season (which is no longer valued at a 10.0) and Katie Brown will also return a Yurchenko layout half. Miranda Hone will bring back her 10.0 start, a Yurchenko full-on back tuck, but the real stars will likely be the freshmen. MaKayla Bullitt will likely bring her Yurchenko 1.5, Elle Golison competes a Tsuk layout half and Kiera Miller once had a vault like Hone’s, a Yurchenko full-on back tuck. However, her scores seem to indicate that she may have been injured at J.O. nationals in 2015 and has not competed much since then. Whether her vaulting has returned to its previous state remains to be seen, but if it has, she will contribute to what is likely to be USU’s most difficult and diverse vault lineup ever. Jazmyn Estrella and Logan Nugent also have decent fulls to serve as backups for this promising squad.

Despite losing three 2016 contributors on bars, the Aggies look like they’re still in pretty good shape. Four of their five returning routines scored 9.8 or higher last season, and they’ve all been refining and
Brittany Jeppesen will also likely be in the running, with both working on major upgrades to their routines in preparation for their college debut.

Beam will see the loss of four routines from last season, but there are still seven routines from last year’s lineups to return to competition. Brown, McIntire, Oster, Peel, Sanzotti, Emily Briones and Natalie Rainbolt all contributed at some point in 2016, and all but one of them scored 9.8 or higher. The creativity of this lineup is huge, with three different acro series, four different dismounts, and

NCAA that competes a different acro series in each of its six routines. How’s that for variety? Rondeau competes a risky switch leap to Korbut combination and a round-off to Rufolva (full-twisting Korbut) series. If she can keep these unique elements in good shape for college competition, she could be a serious contender. Golison reportedly has the highest hit percentage on the team for beam, as of the end of October, when her coaches chose her as Gymnast of the Week. She also competes a difficult standing layout stepout to layout stepout series, a big risk that should come with big reward when she hits. And Bullitt’s front aerial to back handspring to layout stepout series and difficult press handstand mount should keep her in the running as well. The beam squad is looking strong and deep for the Aggies, something that will serve them well as they go up against more difficult opponents this season.

Floor, too, should be very deep for USU despite its four-routine loss from last year’s lineups. Briones, McIntire, Peel, Sanzotti and Ward will all look to return to the floor squad, with McIntire and Sanzotti leading the way. McIntire boasts the only E pass, a full in, but the freshmen should be on hand to help her out. Both Estrella and Golison have double layouts to contribute — Golison’s is competition-tested

working back up to their E passes later on. From what coach Nadalie Walsh has said in many of their preseason training videos, there’s been a lot of focus on tightening form and correcting technique, and doing that can sometimes mean downgrading in order to fix things, which makes the bigger skills better and easier. Whether it has one E pass or four, the floor squad looks hungry for bigger and better things in the coming season.

In the all around, Bailey McIntire is once again the Aggies’ best option. However, both Golison and Bullitt look likely for the future of Utah State, as McIntire is a senior this year. USU also has a lot of three-eventers, including Ward, Sanzotti and Peel, though it’s doubtful any of them will add another event considering all the new depth on the team. If needed, though, Ward could potentially add beam, as she’s a former state champ on the event, and Sanzotti did compete AA in her freshman year. As far as weekly, expect to see McIntire and maybe one other gymnast on all four pieces. But the great thing to take away from all this depth is this: Utah State is on the warpath. It’s gathering its strength and focusing on mitigating its weaknesses. We should expect to see a lot from them in the weeks to come.

So ends our potential lineups series for 2017 preseason! Don’t forget, the season starts on Friday, so set your fantasy gym lineups and find your WatchESPN logins because you don’t want to miss a single meet! Find all our potential lineup analyses from preseason here, our 2016 lineup frequency spreadsheet here, and all the fantasy gym tips in our arsenal here!