In honor of Festivus today, we decided to celebrate by performing some of the time-honored traditions of the holiday.

We’ve got a lot of problems with collegiate gymnastics. And now you’re going to hear about it.

Lack of Reward for Difficulty
There’s a lack of reward for difficulty in the sport. Yeah, you have to think about all 80-something teams competing, but the devaluation fo the Yurchenko full didn’t end the world like everyone thought. Why not make some other subtle changes as well? Or don’t even make it a requirement! Just give incintive to those that go the extra mile. Like most things, gymnastics has to evolve with the times and the athletes participating.

Element Difficulty Cap
Tell us again why the college code only goes up to E-level difficulty? The cap basically strips any incentive to do harder skills. If a gymnast can get an extra bit of bonus form doing the double layout they’re perfectly capable of doing, why not encourage it? Technically, MyKayla’s double-double is worth the exact same as N.C. State’s Caitlyn Fillard’s full-in.

Lack of Individual Recognition
Yeah, yeah, yeah. “It’s all about the team!” But sports can celebrate teams and individuals. *GASP* No really. It’s possible. Bring back individual event finals — even if it means having to watch that one session on a live stream versus a TV channel not everyone gets. Celebrate the best individuals more than just at the banquet. Recognize those stars that make their teams great. Becaue without them, the teams wouldn’t be what they are anyway.

Artistry Bonus
Forget about this basically being an opinion the judges would have to decide on. But shouldn’t routines from the likes of Janay Honest and Chayse Capps be rewarded? When compared to the pose-pose-pose choreography some teams bring to meet, the Oklahomas and UCLAs of the gym world don’t get the benefit they deserve from not making us want to gouge our eyes out after watch their routines.

Raise Recruiting Age
Tell us the college and career path you dreamed of when you were 12 is the same thing you ended up doing after graduation. Go on. We’ll wait… Exactly. Recruiting for gymnastics needs to change. Very few gymnasts barely in high school know exactly what they want to do as adults. College is more than just gymnastics, the head coach and the team members (heck, when some of these recruits are verballing, none of those gymnasts will even be​ on the team anymore!). And we’ve seen the repercussions of this lately with flipped committments and transfers here and there. Plenty of other sports handle this aspect just fine. Swimmers don’t committ until much later and you don’t hear about too many football players committing when they’re in middle school. Of course there are other problems like less scholarship options and whatnot, but something has to be done.

But after all of this, don’t get us wrong. We love college gymnastics and all it has to offer. We’ll still be setting up six screens on regional day and absorbing every routine we can get our eyes on. 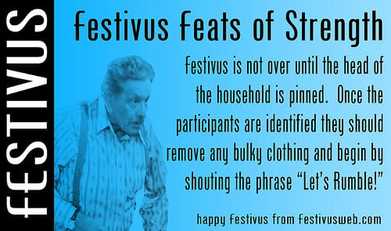 Lastly, what’s Festivus without the Feats of Strength because as they say, “Festivus isn’t over until the head coach is pinned.” Or something like that… In the running are: D-D Breaux (1-seed), Rene Lyst (wild card selection, 2-seed), Miss Val (3), Dana Duckworth (4), Bev Plocki (5), KJ Kindler (6), Tom Farden (7), Megan Marsden/Greg Marsden combo (8), Tabitha Yim (9), Jenny Rowland (10), Dan Kindig (11), Jeff Graba (12), Danna Durante (13), Jay Santos (14), Jeff Thompson (15), Elise Ray (16).
Round 1
Round 2
Round 3
Round 4
D-D Breaux (1) vs. KJ Kindler (6)
Caroline: Despite the fact that KJ has won championships and D-D has not, I think I have to go with D-D. She tells it like it is, she’s been at this for forty years and she’s never given up – she’s been patient and determined, and now is her time.
Elizabeth: I’ve been saying it all along. D-D is not someone you want to cross. She’s nice when she needs to be but strict when she needs to be as well. And one time on a teleconference she cut a coach speaking off saying something along the lines of “just say what you think already!” She says what she’s thinking and doesn’t care what others think. That’s rare in women’s gymnastics these days.