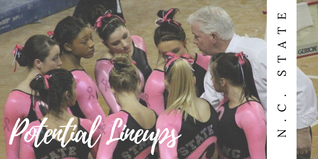 ​Today, we’ll take a look at the North Carolina State Wolfpack and how they might fare in the coming season. The team loses some major players in seniors Aubrey Hine, Courtney Turner, Brittni Watkins and Michaela Woodford. However, they’ll gain some key freshmen, including a former American elite and multiple J.O. national qualifiers. Maintaining its forward momentum and adding to it will be the key to qualifying to Regionals and beyond this year for NCSU.
On vault, the loss of Watkins will be felt most, as she competed the only 10.0 vault last season, a Yurchenko 1.5. All the veterans will be returning pretty standard Yurchenko fulls, barring any upgrades. Junior Chelsea Knight is consistently the strongest of the bunch, with Amanda Fillard, Caitlyn Fillard, Alexa Phillips, Paris Phillips and Maggie Tamburro all contributing to the vault lineup last season as well. Of the freshmen, both Alexis Beucler and Drew Grantham should have solid Yurchenko fulls to add to the mix. In addition, Grantham has trained a Tsuk tuck full, which is only worth a 9.9. But if she can lay it out, it’d be a 10.0 start value. Plus, Hailey Mesmer has trained another 9.9 vault, a handspring tuck half — she’d only have to turn that into a pike to make that a 10.0 vault. With some work, these freshmen could be the vault lineup of the future for N.C. State.

Bars sees the loss of Turner, Watkins and Woodford who all scored over 9.85 last season. However, both Fillards, Knight, Hannah Sobhan and Nicole Wild will all be back to contribute, with Wild and

​Melissa Brooker has a unique Maloney/bail to handstand combination that should set her apart from the rest of the team, who all compete single-bar releases.

Without Hine, Watkins or Woodford, the Wolfpack beam lineup may be a bit sparse. Both Fillards, Knight, Wild and Sami Circeo all contributed at different points during the 2016 season, but that’s

working with elements she’s comfortable with. Brooker also has gorgeous split positions and only fell twice in the course of her 2016 J.O. season, and those were early on in the year. She can hit when it counts, and that’s something NCSU will want to count on.

Watkins and Woodford will leave big gaps in the floor lineup, both scoring 9.9 or higher multiple times last season. Watkins also contributed one of the four E passes to the 2016 lineup. However, both Phillips sisters, Knight, Tamburro, Caitlyn Fillard and Mackenzie Itcush will all return to contend for the floor rotation. Fillard, Alexa Phillips and Paris Phillips have the remaining two E passes to bring to the table. Fillard competes a full in and the sisters both have double arabians, though Paris is the

attitude are high points of Nicole Palmer’s routine, with some solid tumbling to match, and Brooker’s elegant lines and clean tumbling should serve her well in college competition. Beucler’s tight form and high full-in should make her a strong contender for the lineup, but the real standout for the freshmen on floor is Grantham. She boasts a full-in with crazy amplitude and rotation, and she doesn’t even hold her legs while she twists! Her dance is also full of sass and personality, which should be a big hit with NCAA audiences, especially when the Wolfpack faces SEC opponents Florida and Georgia early on in the season.

As far as the all around is concerned, Knight is definitely a strong contender, as she was given the opportunity to compete all four pieces in almost every meet last season. However, with as much competition as there will be for the floor lineup, it’s possible a freshman might bump her out of the lineup and thus out of the all around. Another possibility is Caitlyn Fillard. Though not the most consistent performer in 2016, she may end up in the all around out of necessity. NCSU is low on options for bar routines, so even though that’s her weak event, she may be called upon to compete it and thus end up on all four events. As far as the freshmen go, Beucler is the strongest choice, provided she’s still in the shape she was a few years ago when she was dominating competitions and working on elite-level routines. If she is, she could definitely be a game changer for the Wolfpack.

That about does it for North Carolina State! For more on lineups, check out our page or our previous series of posts here.

Also, make sure to vote in our Twitter poll to choose our final featured team in the bonus lineup series!

Our NCSU potential lineup post comes out tomorrow, but who will be our last featured team? Vote now, or reply with your vote! #NCAAGym 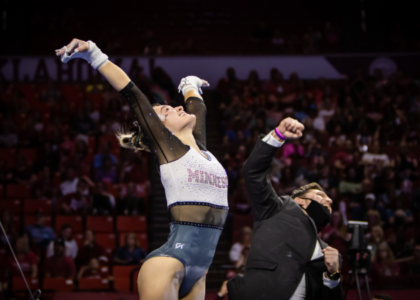