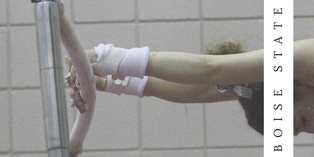 In the first of our bonus set of potential lineup articles, we’ll tackle the Boise State Broncos, coming off of what may be their most successful year ever, finishing the regular season No. 15. However, after losing seniors Maddie Krentz, Krystine Jacobsen, Molly McFarland and Marissa Wossner, BSU will have a fair amount of ground to make up, as each of them contributed regularly to at least one event. With their incoming class of five freshmen, including two international elites fresh from the Rio Olympic Games, the Broncos should almost certainly be up to the challenge.
Of the seniors, only Krentz was a regular contributor to the vault lineup, so the team’s losses there will be minimal. Only one of its returning vaults, though, will have a 10.0 start value. Mary Frances Bir competes the handspring pike half and had solid success with it last season, scoring 9.8 or higher on a regular basis. Mackenzie Bennion may have had a 10.0 vault last year, but it is now worth 9.95, so her
Rim Championships, competing a Yurchenko double full and a Yurchenko half-on layout half-off. While her form is not always the cleanest, she has a lot of power, so if she downgrades to a Yurchenko 1.5 or an Omelianchik (Yurchenko half-on front pike), she could definitely be a strong contributor for Boise State and still keep her 10.0 start value. Isabella Amado, Maddison Nilson and McKinley Pavicic all have Yurchenko fulls to potentially contribute. And finally, McKenna Morrell competes a Tsuk layout. While that vault only has a 9.8 start value, if she were able to train just a half twist, she would bump up to a 10.0. It may not happen for her this year, but keep an eye on her for the future.

Bars may see the greatest loss without routines from Krentz and Jacobsen. Jacobsen was the top-ranked bar worker in the nation at the end of the 2016 season, so she will not be easy to replace. Bennion, Collantes, Remme, Stockwell and Diana Mejia will return bar routines from last year’s lineup,

earned her the title. Bars may not be the star event like it was last year for the Broncos, but it shouldn’t become a weakness either.

On beam, the team loses regular contributions from Jacobsen and McFarland, both of whom regularly scored 9.8 or higher. Collantes, Mejia, Remme, Urquhart and Sarah Means all should return to the lineup, and almost all of them reached or surpassed the 9.85 mark at some point. The variety of routine construction among them is pretty wide, using three different acro series combinations, six different jump shapes, and four different acro elements outside of the series. What’s interesting to note, however, is that all but one of these veterans uses a roundoff to back 1.5 twist dismount. Means dismounts with a back handspring to gainer full, but she’ll have good company next year. Pavicic’s clean routine features perfect split positions and solid landings, including on her back handspring to gainer full dismount. Amado could also potentially contribute with her library of difficult elements from her elite experience. At worlds last year, she did fall, but if she’s able to construct her college routine of the elements that she lands best, she could definitely be a threat on beam.

Jacobsen, Krentz and Wossner are all pretty big losses on floor, all scoring 9.8 or higher on a regular basis. Keeping Collantes, Remme, Stockwell and Urquhart still allows Boise to have three E passes built into their lineup — a full-in and two front double twists. McGregor may also be able to contribute an E pass with her piked full-in if she can clean it up, and Amado, Morrell and Pavicic may all also be able to contribute. Pavicic is the most likely of those three, with high tumbling and solid landings. With all the depth available to them on floor, the Broncos may be able to turn this into a really strong event.

As far as the all around is concerned, Remme and Collantes are likely to again play key roles in all four lineups. Both regularly hit 9.8 or higher on all four events last year, with Remme peaking at an AA total of 39.375 and Collantes at 39.475. As far the freshmen go, Pavicic is actually the most well-rounded of the class, and thus the most likely to make a bid for the all around. McGregor and Amado, as competitors in the all around at the Olympics, haven’t had the best E-scores on their respective weaker events, particularly bars. However, they could surprise — with simplified, clean sets, they too could be major contenders in the college AA field.

That wraps it up for Boise State! For more on potential lineups, check out our page here, or our previous conference-based series here. If there’s a team you’d like to see us cover, leave us a comment or drop us a line on Twitter — we love to hear from you! As a little sneak preview, we can tell you that later this week, we’ll be covering Southern Utah and Eastern Michigan, per your requests. So stay tuned!