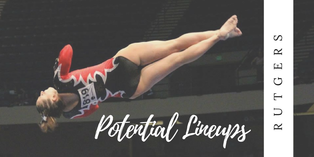 Today we’ll take a look at the Rutgers Scarlet Knights and how they’ll stack up in the coming season. Losing a large crop of seniors could definitely hurt them, but with a strong class of diverse freshmen, they could make up the ground they lose. Seniors Emma Hoffman, Claudia Salinas, Katie Stebick, Jenna Williams and Nicolette Wilson were all regular contributors to at least one event, so both veterans and freshmen will have to step up to fill those holes.
Hoffman, Williams and Wilson all leave sizeable holes in the vault lineup, which was one of the weaker events for Rutgers last season. Claire Jones competed a strong front handspring front pike, but it is only scored out of a 9.9. However, she also has a front handspring, front handspring, front pike in her repetoire, which is a 10.0 start. She could pull it out again in 2017. While Riahanah Ali, Michelle Amoresano, April Baker, Libby Groden and Charly Santagado should all return Yurchenko fulls, many had significant form issues that led to lower scores. Many of them separate their legs on the block and
from a 9.9. If she can upgrade the tuck to a layout, she’d be a shoo-in for the lineup, so long as she can land it. Lastly, fellow freshman Kaitlyn Hall also has trained a very clean Yurchenko 1.5 to mats, so if she can bring that back in her college career, she could be a game changer for vault at Rutgers.

On bars, Hoffman is the Knights’ only loss, so they’ll retain most of their heavy hitters. Ali, Amoresano, Baker, Groden, Elizabeth Nand, Makenzy Shank and both Charly and Eriel Santagado competed in the bars lineup last season pretty regularly. Again, there is definitely room for improvement among these

​Beam should see the return of seven veterans: Baker, Groden, Jones, Nand, E. Santagado, Shank and Ayana Lee. Of these, Groden and Shank are the only ones to reach a 9.85, and a few didn’t even hit 9.7 at all. The loss of seniors Salinas and Williams will certainly take a toll, as they were some of the most consistent beam workers on the team, and Salinas was the only other gymnast to hit the 9.85 mark.
routine with a cool switch leap, pike jump, back tuck combination and clean landings on all of her acro elements. Poliakova, as a former British elite, comes in with a vast array of unique skills, and if she can pick those where she’s most consistent and stay in her mental game, she should have no trouble staying on the apparatus.

The losses of Hoffman and Stebick on floor will definitely leave holes behind, as Hoffman was one of the consistently higher scores and Stebick had one of the team’s only E passes, a front double twist. The only remaining E pass left among the veterans is Jones’s double layout, which could make her a

training a full in. It’s likely she won’t do both in regular competition, but she could choose to throw it a big meet to boost her score, a la Talia Chiarelli of Michigan at nationals last year. The rest of her tumbling passes are very clean and her landings are decent, so she’ll just need a healthy dose of sassy choreography and she’ll be ready for college competition.

In the all around, Groden was the Knights’ strongest and most regular performer, and she should expect to return to that role. However, there might be some other candidates as well. Baker, having returned to training after her devastating injury last season, started out competing all four early in the season before the mishap, so she may slowly try to return to that goal. Charly Santagado, too, got one opportunity to compete all four last season, though she’ll want to work on her beam if she wants to be afforded that opportunity again. And freshman DeVries could certainly make a run for any of the four lineups. If coach Louis Levine gives her a chance at all of them, she could be the team’s next young star.