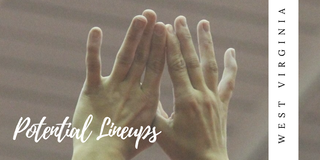 To wrap up our Big 12 series, let’s take a look at the West Virginia Mountaineers! Since Jason Butts became head coach in 2012, the team has ended the regular season each year ranked somewhere between 25th and 40th. Will this be the year they break into the Top 20? They’ll lose some strong seniors, including beam and floor stalwart Melissa Idel, vault and bar powerhouse Jaida Lawrence and beam specialist Audrey Tolbert. But with five new freshmen coming in, each with different strengths, this may be one of the strongest, most diverse Mountaineer teams in years.

On vault, WVU loses just Lawrence’s Yurchenko full. Despite her power and distance on the event, it shouldn’t be too much of a loss, as the team still retains more than enough lineup-worthy vaults just
the season. She was only just able to return to vault a year ago after a serious injury. If she’s healthy though, she’ll definitely be a contender for the lineup.

Bars will see the loss of Lawrence as well, but the Mountaineers should retain most of their veteran depth and gain a few key freshman routines. Bernard, Goldberg, Muhammad, Tun, Amanda Bowman,

Merwin has shown a solid full bar routine post-surgery, including a difficult Markelov and clean giant full to double back dismount. With all this talent, WVU will definitely have the blessing of depth on bars this season.

Both Tolbert and Idell will be missed on beam, but with two promising freshmen and some veterans stepping up to the plate, their absence shouldn’t be a problem for West Virginia. Gillette, Goldberg, Koshinski, Moore, Muhammad, Wright and Carly Galpin should all expect to compete for lineup spots. Koshinski and Muhammad were in the lineup on and off last season, but if the Mountaineers are really going to excel this season, they’re going to need those two routines to be really solid and useable every week. Gillette had some consistency issues as well, falling three of the six times she went up on beam. Her routine is packed with difficulty though, and when she hits, she’s capable of scoring 9.8 or higher. If she can get her head back in the game and nail her routine, she’ll be one of the team’s strongest beam performers. In addition to all the veterans, freshmen Cluchey and Erica Fontaine will come in with strong beam sets. Cluchey performs a difficult back handspring to two-foot layout series and a powerful punch front. And Fontaine’s clean lines give her great elegance in her jumps, and her back handspring to gainer 1.5 twist dismount is truly unique. Expect them to give some of the veterans a run for their money.

Idell’s leadership will definitely be missed on floor, but senior Alexa Goldberg should be right there to step into her shoes. Her power-packed routine, featuring one of the cleanest full-ins the NCAA, is sure to earn high scores. Koshinski should also be a top contributor on this event with the only other E pass

an edge in NCAA competition, and Kaufman’s dramatic dance should fit right into WVU’s lineup. Finally, Fontaine’s sassy style and clean tumbling could definitely put her in contention. All this talent on floor will make Butts’ job difficult this season, but you won’t hear him complaining.

As far as the all around, expect to see both Goldberg and Muhammad back in the mix. This will be Goldberg’s senior year, and as well as she did last season, it’s highly unlikely she’ll be left out. Muhammad should also return to the mix, though beam may again be a stumbling block. She’ll need consistency to beat out the other veterans for lineup spots. So that should be a focus for her in preseason training. Both Koshinski and Gillette will expect to contribute on three events, with Koshinski’s weakness on bars and Gillette’s on vault. If either can break into the lineup, they’ll have a shot at the all around as well.

That’s all for our Big 12 series! Check back for our Big 10 series starting later this week, and if you’re interested in more, check out our potential lineups page here, our previous series here, or previous posts in this series: