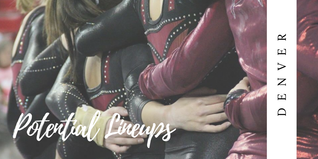 Today we kick off our Big 12 potential lineup analyses with the Denver Pioneers! The Pioneers will see substantial losses after the graduation of seniors Emily Barrett, Maggie Laughlin, Nina McGee, Katie Menhinick and Morgan Tolman. McGee in particular leaves a major gap, as she was ranked in the top 10 in both the all-around and floor exercise and top 20 on vault and bars. The Pioneers also had a number of gymnasts injured at different points during last season, including some top contributors like Laughlin. With some time to heal under its belts and the addition of three stellar freshmen, Denver will hope to repeat the success of last year, where it finished the season ranked 15th in the nation.
The Pioneers will miss Barrett, Laughlin, McGee and Menhinick on vault, but they’ll gain a powerful asset in freshman Maddie Karr, who won vault in her group at J.O. nationals this year. Returning to the
of depth, vault could be one of their trickier events this season.

On bars, Denver loses McGee and Menhinick’s routines but retains the majority of the regular lineup from last season. Addison, Chesnok, Ross and Claire Kern should all return solid routines that scored

in 2015 before getting injured before the 2016 season began. Lomonte has gorgeous form on a Gienger of her own and a difficult double front dismount.

In the past, Denver has been a solid beam team, and this season should continue that trend. Returning routines from Chesnok, Ross, Schou and Claire Hammen are all capable of scoring 9.8 or higher, and the team will also hope to see the injured Rachel Fielitz return as well. Her one beam appearance in 2016 only scored a 9.725, but in 2015, her top score was a 9.9. If she’s healthy, it’s quite likely she’ll be able to reach that pinnacle once more. Freshmen Karr, Ogden and Courtney Loper should all also look to contribute to the beam lineup. Karr’s form is as impeccable here as all her other events, and she has one of the more creative acro series of the bunch — a side aerial to back handspring. Ogden’s time as an elite gave her great experience, and the elements she executes best should make for a great NCAA routine. Loper comes from Chow’s, and true to her coach’s reputation, her beam is clean and solid in all of her landings. Including her series, she has five different acrobatic elements in her beam set, using forwards, sideways and backwards tumbling.

On the floor, Nina McGee leaves behind a massive hole that may not ever be filled entirely. She scored a perfect 10 three times during the season and became the national floor champion after qualifying to the event as an individual. The Pioneers will definitely lose depth on floor, as they only return three routines from last season’s lineup: Addison, Hammen and Schou. Of those, Addison is the only one

perhaps is not as high as some of her new teammates. Ogden, however, didn’t compete floor at all in 2016. So that leaves one lineup space left to fill. Of the remaining gymnasts who could step up to the plate, Fielitz and Ross both competed floor in 2015, with Fielitz the more regular contributor of the two, but there’s also Lomonte, who in the past has been billed as a bars and beam specialist. However, she competed floor a handful of times in her freshman year, and in her club days, she had a strong floor routine that included a double arabian.

As far as the all around is concerned, freshman Maddie Karr is a shoo-in with her high level of difficulty and beautiful execution. Winning the all around in her subdivision at J.O. nationals should certainly prove her mettle to coach Melissa Kutcher-Rinehart. As far as the veterans go, a few will certainly do three events but may have some challenges if they want to compete all four. Addison will have to put together a solid beam routine to crack this season’s lineup, but if she does, that should put her in the mix. Chesnok competes vault, bars and beam, but if she puts together a competitive floor routine, there is one lineup spot still hanging in the balance where someone could surprise. If it’s Chesnok, that’d give her a shot at the all around as well.

Come back tomorrow for our next installment in the Big 12 series, Iowa State! If you want to learn more of our thoughts on lineups for the coming season, check out our potential lineups page here or either of our previous analysis series here.

Editor’s Note: After time of publishing, it was brought to our attention that Kaitlyn Schou also has an E tumbling pass, a front double twist. This should prove very valuable to Denver’s floor lineup.