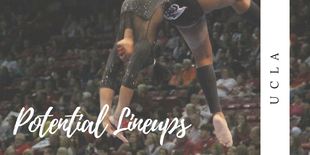 Today we take a look at last year’s Pac-12 Champions, the UCLA Bruins. The loss of their seniors will be substantial, as team leaders and lineup stalwarts Sadiqua Bynum, Sophina DeJesus and Danusia Francis have all graduated. However, with the large, talented class joining the team this year, including Olympic gold medalists Kyla Ross and Madison Kocian, the Bruins should be more than capable of filling in the blanks.

With all the new talent coming in, vault may be a bit of a question mark until the day of the first competition. While the team will lose a 10.0 vault in Bynum’s Yurchenko Arabian, it’ll turn out not to matter much since the vault is being downgraded to a 9.95 this season anyway. While many Bruin veterans from last season’s lineup will be returning, some of them are capable of harder vaults than they performed in 2016. In addition, many of the newcomers are capable of very difficult vaults but may perform easier ones in order to maintain cleaner form. The only 10.0 start value vault that will return for sure is Napualani Hall’s Yurchenko 1.5. In addition, Angi Cipra, Rechelle Dennis, JaNay Honest, Peng-Peng Lee, Sonya Meraz, Katelyn Ohashi and Madison Preston all performed useable Yurchenko fulls last season with Preston’s being the best of the group. Ohashi performed the double in her elite days, so it’s possible she may work her way up from the full during the season. The freshman class boasts three former US National Team members — Felicia Hano, Kocian and Ross — who have all performed the Yurchenko double in the past. Kocian has stuck to the full lately, even at the Olympics, so it’s likely she’ll keep that for NCAA competition. Hano and Ross will also likely downgrade to the full, at least to start out, to focus on clean execution and get comfortable competing in the college environment. J.O. standouts the Glenn twins, Anna and Grace, who are known for their extremely clean gymnastics, have Yurchenko fulls as well. But with so many veterans doing the same vault, it’ll be tough for them to crack the lineup.

Bars will also see the return of many veterans with useable routines. However, the incoming freshmen may overshadow many of them. Dennis, Honest, Meraz, Ohashi, Melissa Metcalf, Hallie Mossett and
the reigning co-world champion and Olympic silver medalist, and Ross is a former world silver medalist as well. The duo has a wide variety of difficult and well-executed skills to pull from to construct college routines. Anna and Grace Glenn also have near identical routines with impeccable execution, so they may be able to sneak into a lineup or two.

On beam, the Bruins will definitely feel the loss of team leader and creative mastermind Francis, but they also have some key players joining the team to fill that gap. Beam is arguably Ross’ best event, as she boasts another world silver medal on the event and placed 6th to qualify to the balance beam finals in London, only to be left out due to the two-per-country rule. Kocian, too, does some strong work on beam, showing difficult skills like a standing arabian and a front aerial to sheep jump combination. She may not perform all of these skills in college, as they are often too risky to be worth the reward, but her clean execution and lines will serve her well in the NCAA as well. In addition to these two standouts, the Bruins will return Lee, Meraz, Ohashi, Savvidou, Mikaela Gerber and Nicki Shapiro to the beam lineup. These veterans made many memorable moments last season, from Ohashi’s scary fall on her dismount to Shapiro’s hasty save after splitting the beam on her series. Regardless of who is in the lineup, UCLA will once again be sure to wow on beam.

Though perhaps one of the most entertaining team in the NCAA on floor, UCLA actually had only one regularly-competed E pass last season in Bynum’s double layout. Now that she’s graduated, their difficulty may suffer a little. Cipra, Gerber, Hall, Honest, Meraz, Mossett, Ohashi and Preston all contributed to the floor lineup last year with routines packed with the personality, story and

dramatic, classical floor routines with more poses and arm movements than full choreography during their elite years, but they’re both capable of some very difficult tumbling. They may have to strike a new balance between the two as they join the Bruins. And California local Mercedez Sanchez already has some great dance in her J.O. routine, so with a routine from Miss Val, who knows what she’ll be able to accomplish? In addition to the incoming freshmen, UCLA may have an ace up its sleeve — Macy Toronjo. Out with an injury for the entirety of last season, Toronjo is another former national team member, though she returned to J.O. competition before coming to UCLA. Even so, her floor routine at J.O. nationals in 2015 boasted two E passes, a double layout and a full in, which is twice as many as most gymnasts will usually attempt. If she’s back to full strength this season, she could potentially have the most difficult routine on the team.

In the all around, Kocian, Ross and Ohashi are the likeliest choices. As decorated former elites, these three are used to performing in high pressure situations at a very high level of difficulty on all four events. However, they aren’t as used to performing in those situations as often as is required for NCAA competition, so they may switch off from week to week. Meraz also competed the all around a few times last season, so she may again get the call to compete all four pieces this season. Lee is also certainly capable of performing well in the all around, though she has not performed floor yet in her college career due to a string of knee issues. If she can stay healthy, maybe this will be her year.

Last but not least, there is speculation that former junior national team member Nica Hults will be joining the team in January. Originally, she had committed to UCLA in 2013 for the 2016-17 school year, but it is uncertain when exactly she will arrive in Westwood. If or when she does arrive, she could potentially contribute on all four events, with her particular strengths being bars and beam.

Tune in tomorrow for some analysis on UCLA’s conference rival, the Utah Utes! For more on potential lineups, see our lineups page, our SEC series, or previous posts in our Pac-12 series: